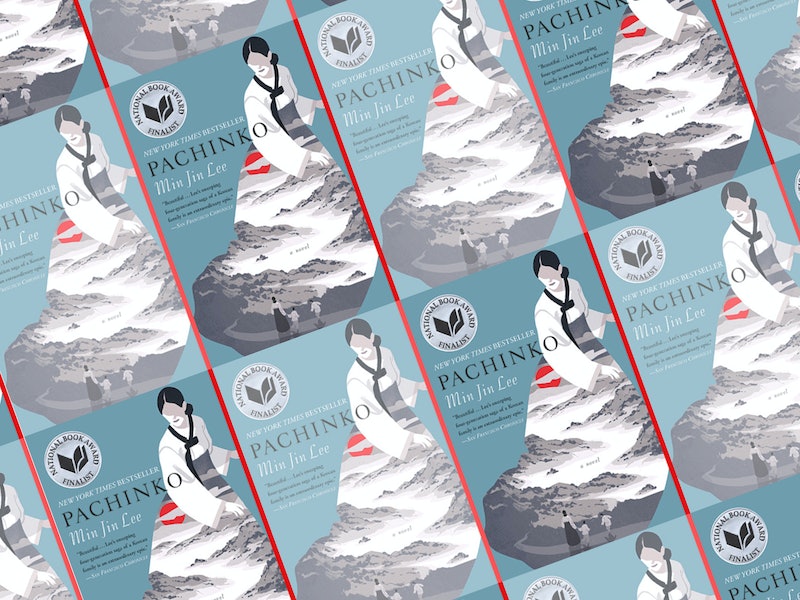 Bustle's I'm So Jealous series is dedicated to the books, TV shows, movies, podcasts, and more that super fans are so jealous someone else gets to experience for the first time. In this installment, Verdell Walker writes about Pachinko by Min Jin Lee.

I always assumed I would be a mom someday; begetting the next generation was just something that responsible adults did. More than that, I'd always assumed I wanted kids, that it was something I'd naturally do whenever I found the right man. But late last year, a number of forces coalesced to chip away at that certainty, starting with the unreal cost of childcare. I was startled to learn that putting just one kid in my company’s subsidized daycare would cost nearly as much as my rent. I also read a number of articles in outlets like The New York Times and NPR about the terrifying realities of pregnancy and motherhood for black women like myself. A teacher strike in my city forced the mothers at my workplace to find alternative childcare for their kids since they couldn’t go to school.

Did I really want to do this to myself?

Right about the same time I began to question my desire to become a mother, I picked up Pachinko by Min Jin Lee, a novel that I devoured in a weekend.

Pachinko is a multigenerational saga of a Korean family, but it's also a book about mothers and the sacrifices they make for their children. In 1883 Korea, Yangjin marries the quiet, good-hearted Hoonie and the couple run a boarding house together. They have a daughter, Sunja, who grows to be as dutiful and hardworking as her mother. Sunja’s beauty attracts the Korean gangster Koh Hansu, with whom she begins a relationship; she becomes pregnant with his son, not knowing that Hansu is already married. Sunja refuses to become Hansu’s mistress, and instead marries a sickly pastor who moves the family to Japan to live with his brother and sister-in-law, the relentlessly optimistic Kyunghee. In Japan, Sunja and her family face intense racial prejudice against Koreans as well as discrimination for their Christianity. Sunja battles against incredible challenges — World War II not the least among them — to raise her children and give them a better life.

The particular suffering of women is a major theme of Pachinko. I saw so many parallels between the main characters and my own mother and grandmother. Yangjin, Sunja, and the saintly, childless Kyunghee meet the trials of their life with hope and stoicism. Like the mothers in Pachinko, my mother and grandmother overcame poverty, racism, and hardship to give their children a shot at something better than they experienced. As I read Lee’s incredible story, I couldn’t help but question if I really possessed the selflessness it seems motherhood requires. I’m still asking myself that question.

Yes, Pachinko is a feast for your mind and heart, but this book is also special to me because Lee’s story helped me work through my doubts and feelings about motherhood. Might I still have children one day? Absolutely, especially if I meet the right partner. But I owe it to myself, and these hypothetical tykes, to be sure motherhood is something I truly want. That might sound obvious in the year 2019, but I’m not sure many of us have given that question enough serious consideration.

If you’re picking up Pachinko for the first time: Do not be daunted by its size. Pachinko clocks in at almost 500 pages, but I promise that by the end of the novel that page count won’t feel like nearly enough.

If you love it and want more of the same: You should pick up Jhumpa Lahiri’s novel The Namesake, about a Bengali family and their journey to self-acceptance in America.

And if this book converts you into a member of the Cult of Min Jin Lee: You’ll have to join me in reading her debut novel, Free Food for Millionaires, about a Queens-bred daughter of Korean immigrants determined to find a place in New York City high society.

More like this
16 Novels That Paint A Realistic Portrait Of Abortion
By K.W. Colyard
5 Gripping Books To Read From Women’s Prize For Fiction Winner Ruth Ozeki
By El Hunt
10 Must-Read New Books Out This Week
By K.W. Colyard
Ottessa Moshfegh Is Happy To Be Your “It” Girl
By Arya Roshanian
Get Even More From Bustle — Sign Up For The Newsletter