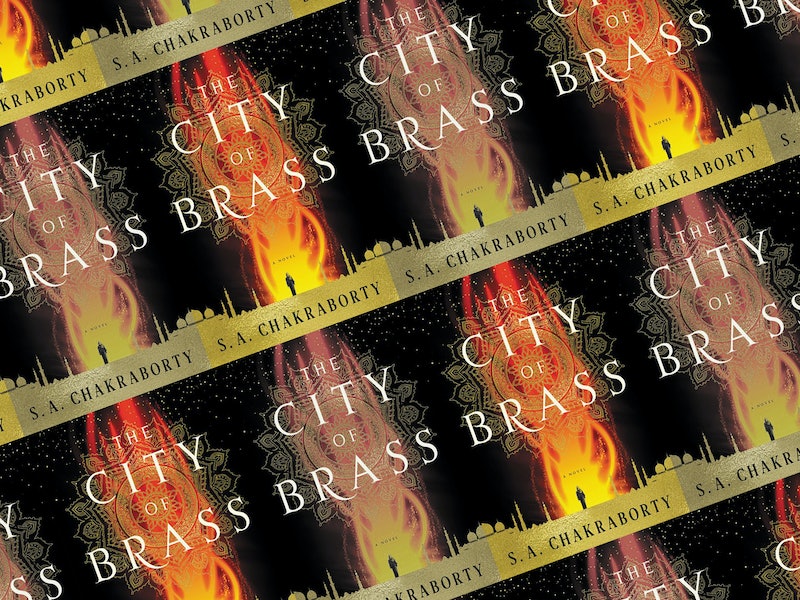 Bustle's I'm So Jealous series is dedicated to the books, TV shows, movies, podcasts, and more that super fans are so jealous someone else gets to experience for the first time. In this installment, MuslimGirl.com writer A'isha Saleh celebrates her love of The City of Brass by S. A. Chakraborty.

When I read all of the Harry Potter books for the seventh time, I was perfectly content. It didn’t even phase me that the two characters that resembled me the closest — the Parvati twins, two of the few young women of color in the series — were rejected instantly by Harry Potter and Ron Weasley, who pined for other girls. It wasn't until I picked up another fantasy novel — S.A. Chakraborty’s The City of Brass— that I realized that the joys of reading are elevated when I see characters like me in the work. Funnily enough, the reason I even happened across this book was because a neighbor of mine saw that my mother wore niqab (a head covering that also covers part of the face) and recommended the novel based on the fact that she dressed like the main character.

As a Muslim-American woman of color, I didn't know if I wanted to cry or laugh as I read through The City of Brass; I was taken on a completely new and exhilarating fantastical adventure while still easily being able to recognize myself in the language of the characters, in the faith they took for granted as theirs, and in the cultures and people they found themselves surrounded by at all times. The book's author, S.A. Chakraborty, is actually a white woman, but she converted to Islam as a teenager. She was inspired to write this novel, in part, so the Muslim community could have superhero-like characters to look up to as their own.

'The City Of Brass' by S.A. Chakraborty
Amazon

In The City of Brass, readers follow the story of Nahri, who is a young Muslim woman living in Cairo, Egypt during the 18th century. She hustles to scrape together enough to survive as she cons the superstitious people of Egypt into believing she is a fortune teller and healer. Then, one night her pretense actually does call forth a Djinn from a hidden dimension of the world that humans are not meant to cross. She accidentally attracts the most dangerous and powerful of the rogue djinn to pursue her, forcing her to place her trust in the unknown and seek refuge among the djinn that could potentially grant her sanctuary.

Another character adds to the magical and engaging story: Alizayd Al-Qahtani, Prince to the King of the Djinn civilization. Readers follow along as Ali embarks on a journey through the heart of his civilization, Daevabad, a magical city hidden in the deep desert. His position in this society gives readers an intimate look at the political and social intricacies that complicate their world. Ali is a wonderful example of a devout Muslim character who also happens to be a magical creature with incredible supernatural abilities, incredible good looks, and a total inability to normally socialize with the opposite sex.

This is a fantasy novel, and readers get to glide through an imaginative yet culturally accurate story about magic and the supernatural. But at it's core, it's also a novel about a young woman and a young man who are trying to do right in a world that constantly prioritizes political power and enforces social inequity. And seeing myself reflected in these two characters made me hungry for more.

If you are picking up The City of Brass for the first time: Do not be put off by the terminology that you might not initially understand —  there is a General Terminology section Chakraborty provides for you in the back.

If you love it and want more of the same: Alhamdulilah (Thank God!) for Chakraborty’s incredible work ethic because she just released the sequel, The Kingdom of Copper. (Currently reading and obsessed!)

And if this book converts you to the cult of Fantastical Muslim/Middle Eastern inspired Literature: I HIGHLY recommend you check out the incredible work of G. Willow Wilson, author of Alif the Unseen andThe Bird King, and Helene Wrecker, author of The Golem and the Jinni.

More like this
Ling Ma Is Back — This Time, With Yetis
By Kate Dwyer
Romance Authors Are Mobilizing For Reproductive Rights
By Natalia Perez-Gonzalez
What Is A "Hot Girl Book" & Why Is Everyone Talking About Them?
By Samantha Leach
10 Must-Read New Books Out This Week
By K.W. Colyard
Get Even More From Bustle — Sign Up For The Newsletter