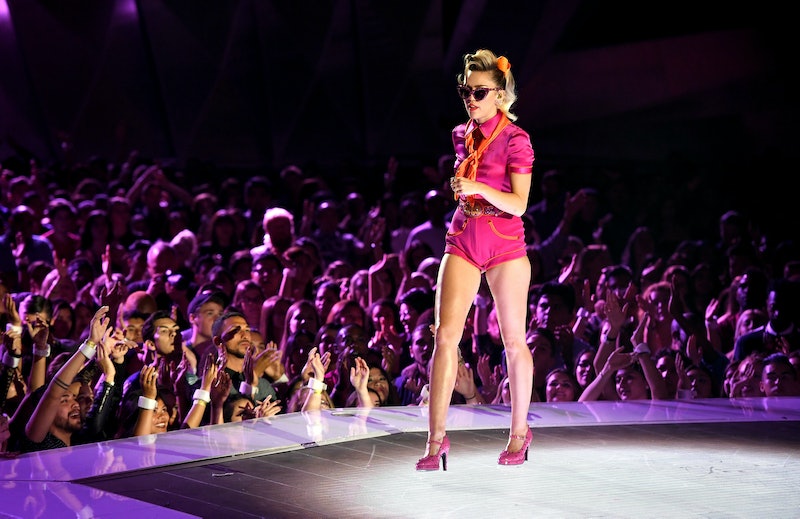 I know what it's like to have your identity publicly in flux, and to have people pounce on any slight insecurity or hesitation shown. That's why, though I have plenty of problems with Miley Cyrus and her trash fire history of appropriating black culture, I do have her back when it comes to her figuring out her gender identity. And her 2017 MTV Video Music Awards performance looked to me like an exploration of gender — one that reminds me of my own.

Here in this (insert huge finger quotes here) "post-fact" world we live in, it's particularly gut-wrenching to finally suck up the courage to say, "I'm not cisgender," only to have someone look you in the face and respond, "No, you are cisgender. You're just confused." Or, even worse: "You're lying."

In May, I came out to my father ahead of my planned legal name change this September, and despite thinking I was prepared, I didn't know what to say to him when he accused me of pretending to be a man. Explaining concepts like "nonbinary" and "transmasculine" suddenly seemed impossible, and he didn't want to listen anyway; after I fumbled to explain, he closed the conversation by telling me if I'm so keen on changing myself, I should join ISIS while I'm at it.

Cyrus came out as not cisgender in Billboard's May 2017 cover story. I say "not cisgender" because she didn't use the word "transgender," and didn't exactly put a label on her identity, instead referring to herself as a "gender-neutral, ­sexually fluid person." It's a small and nonspecific mention, but for me, it's enough to welcome her.

At the VMAs, Cyrus performed her song "Younger Now" with her rad Baddie Gang, a group of older dancers that included 85-year-old drag queen James "Gypsy" Haake. For the show, many members of the Baddie Gang were decked out in stereotypical '50s gear, the men wearing letterman jackets and the women wearing poodle skirts or tights. Haake wore a red-sequined minidress and a leather jacket, his usual fare for his drag shows, while Cyrus herself sported a bright orange skirt with pink ruffles.

Watching Cyrus's performance, I was struck by the fact that the only non-cis performer of the night was the one whose dancers were outfitted in the most gender-conforming outfits, while male backups for cis stars Katy Perry and Nicki Minaj wore heels. But Cyrus parading around in pink and ruffles while her dancers are dressed in '50s norms doesn't make her gender identity less valid, and it may actually be a sign of her working out how she identifies.

There may be folks who think I'm reading too much into this, and they may be right. Until and if Cyrus publicly comments on her inspiration behind her "Younger Now" performance, we won't know. But as someone who has further complicated their own exploration by feeling more and more masculine and yet for the first time dressing almost exclusively in traditionally feminine clothing, I understand wanting to move within the space of traditional gender norms.

Realizing you're not cis can feel like being adrift and seasick. Whether you're a binary trans person or a nonbinary trans person, retreating into traditional gender constructs, no matter how hetero- and cis-normative, can be stabilizing. Taking extreme, stereotypical femininity and masculinity and trying them out can help trans people discover what the particular comfortable blend of the two (or, in some cases, an identity absent of either) is for them.

Exploring gender can and will likely be uncomfortable. I stopped shaving my legs years ago but still quail when someone stares at them too long. I still can't look my own father in the face and explain that one day I may identify differently than I do now, but that doesn't mean my current identity lacks value.

One day, Cyrus may give another interview. She may sit down with a journalist and say, "You know, I've thought it over, and I realized I'm cisgender." That may happen, just like one day it may happen that I identify as a trans man rather than nonbinary. We are lots of us in flux; Cyrus comes under fire because she is discovering her identity in the public eye, sometimes through her art.

Real talk: Plenty of Cyrus's behavior is at best eyebrow-raising and at worst terribly racist. Her recent ditching of black culture and subsequent I'm-a-good-person makeover is worthy of side-eye. But I will always, no matter how questionable someone is, defend their right to explore their gender.

After all, I'm still exploring mine.