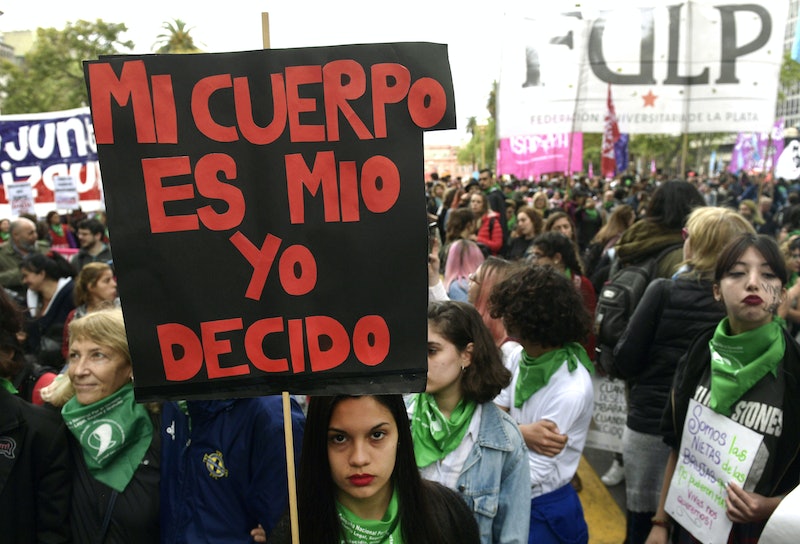 While living in a government-funded immigration center in Texas, an immigrant minor was denied an abortion, according to the American Civil Liberties Union. The young woman entered the United States undocumented at the age of 17 and is now under the legal custody of the Office of Refugee Resettlement. Despite obtaining a judicial waiver required by the state to obtain an abortion, she has been unable to obtain access to a clinic.

The federal Department of Health and Human Services released a statement on the situation to Vice:

While the child is in our custody, our goal is to provide food, shelter and care to her under federal statute. In this specific case, we are providing excellent care to the adolescent girl and her unborn child, who remain under our care until the mother's release.

"ORR has legal custody over minors and can direct their medical care," Susan Hays, a legal consultant for Jane's Due Process, a nonprofit committed to providing legal representation and other resources for pregnant minors in Texas, tells Bustle. "[But she's] not a little kid. [If] you withhold information from her, that's medically very unethical."

ORR directed the young woman to a religiously affiliated "crisis pregnancy center," which doesn't provide abortions like licensed clinics. According to a brief by the ACLU, the woman was blocked by the ORR from traveling to her medical visits, even after judicial authorization, after her attorney offered to provide transportation, and with private funding for her abortion. She was also subjected against her will to a sonogram performed by non-medical personnel.

The reason this is currently legal is because of a new policy put in place by the Trump administration earlier this year "directly prevent[ing] unaccompanied immigrant minors from obtaining abortions," according to the ACLU. Federally funded shelters are banned from taking "any action that facilitates" an abortion for an unaccompanied minor without "direction and approval" from ORR Director Scott Lloyd.

Jane's Due Process reached out to the ACLU, which had initially filed a federal lawsuit in June 2016, when the Obama administration was allowing federal funds to go to facilities that denied women abortions or provided misleading medical information:

It was spotty access to reproductive health care before, but because of this new policy, the government can essentially hold immigrant women hostage and force them to go to a so-called pregnancy center, which are unlicensed, to be preached to or shamed about their decision.

The ACLU added Jane Doe to the case in order to get a temporary restraining order against the shelter so she could obtain an abortion; unfortunately, the court found on Wednesday that it couldn't hear the case. "Today's District Court ruling comes as a serious disappointment, because it delays Jane Doe's abortion even further," Brigitte Amiri, senior staff attorney with the ACLU Reproductive Freedom Project, said in a statement.

Although the court found it couldn't hear the case, it was careful to explain that the government has no business blocking Jane Doe's abortion. Jane Doe has already been blocked by the Trump administration from two appointments related to her abortion care. But she has shown tremendous courage and persistence, and we're not giving up. The denial of abortion care and basic human rights by this Administration will not go unanswered: the ACLU will continue to pursue all avenues to get justice for Jane Doe and young women like her.

Hays and her colleagues first noticed the effects of the new policy back in March, when one immigrant minor attempted to get a medical abortion, which involves taking two pills over a three-day period. However, after she received her first pill, the ORR called the clinic and started asking "weird questions about medical abortions," Hays says. The following day, when she should've received her second pill, "ORR ordered the shelter to not give it to her."

Instead, the woman was taken to an emergency room against her will, Hays says, and subjected to a pelvis gynecological exam, "to see if the pregnancy was still viable." According to Hays, the woman was not told why she was getting the exams. "Which is super creepy," Hays says. "To me, it's somewhere between Handmaid's Tale and Nazi doctors."

Hays considers the unsolicited pelvic exam "sexual assault," she says. "I don't necessarily blame the doctors who did that, they may not have been told. You don't know the specific facts, because ORR has been doing this in secret."

While the woman was eventually administered the second pill, the ACLU has discovered a lot more cases like this. Hays sees this as another way the Trump administration is "imposing their religious beliefs on other people and using tax dollars to do it," she says. "Who do you think paid for the plane? It's such a straight up violation of the Establishment Clause" — which says Congress can't make a law respecting an establishment of religion — "and freedom of religion and the right to an abortion."

The government also hasn't disclosed what happens to the mother or child once they are forced to go through with the pregnancy. "Are they ferreting them away to adoption?" Hays asks. "Are they deporting them? I'm terrified what will happen to this Jane."

But the ACLU and Jane Due Process will continue to fight. Hays says they'll ask another judge in another jurisdiction to hear the case. "They are just forcing her to have this child," Hays says. "They have absolute power over her. They can do anything and we can't effectively stop them; courts don't move that fast. I find the situation horrifying."