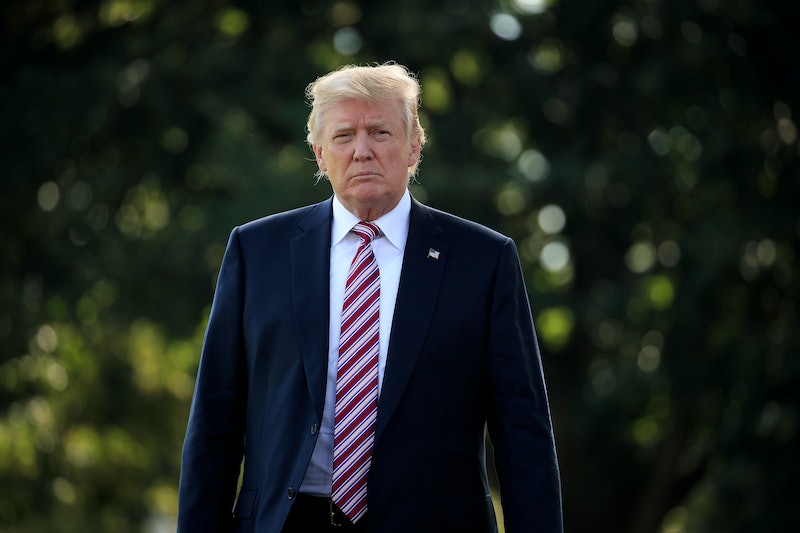 President Trump lashed out against San Juan mayor Carmen Yulin Cruz on Saturday morning in a series of tweets slamming her for criticizing the slow federal response to hurricane relief efforts in Puerto Rico. The backlash was swift, and it sparked renewed calls on Twitter to impeach Trump over his Puerto Rico response.

"Such poor leadership ability by the Mayor of San Juan, and others in Puerto Rico, who are not able to get their workers to help," Trump tweeted, adding that Puerto Ricans "want everything to be done for them." This came one day after Cruz appealed for more aid for the storm-ravaged island and criticized the Department of Homeland Security's comments about Puerto Rico being a "good news story."

"We have no time for patience any more," Cruz had said in a news conference on Friday, according to The Guardian. "I am asking the president of the United States to make sure somebody is in charge that is up to the task of saving lives. I am done being polite. I am done being politically correct. I am mad as hell."

Trump, who flew to New Jersey on Thursday night to spend the weekend at his private golf club, has drawn the ire of Twitter users, who slammed the president for not issuing public statements about the unfolding crisis in Puerto Rico and for criticizing the San Juan mayor. Cruz has been living in a shelter since the storm destroyed her own home and wore a "Help us we're dying" t-shirt during her interview with CNN. Twitter is now reviving the #ImpeachTrump hashtag and people are saying that after Trump's comments about Cruz, he's unfit to be the president.

He Can't Handle The Pressures Of The Job

Scott Dworkin, co-founder of the Democratic Coalition, tweeted that Trump "can't handle the pressure of the job" and should be impeached. He also believes that if Hillary Clinton had done anything that Trump has done, she would've already been impeached by Republicans.

Jetting Off To His Golf Course

One Twitter user pointed out that Trump was most likely "playing golf at one of his resorts" while he tweeted about Cruz having "poor leadership ability" and Puerto Ricans "wanting everything done for them."

San Juan Is In Ruin

Half of Puerto Rico's 3.5 million residents are without drinking water and the power on the island could be knocked out for six more months, according CNBC.

Another user pointed out that Trumps comments continued in "an abusive cycle" and that "We react. Things settle. More bullsh*t. More reaction. Let's end this."

One user reacted to a tweet that the mayor of San Juan was "wading through sewage, searching for people with a bullhorn while [Trump] insults her on twitter." The person replied, "I don't think he can go any lower unless he physically went to PR and began to hold victims heads under the flood waters."

Royal Caribbean International cancelled a seven-night cruise leaving from San Juan on Saturday in order to pick up 1,700 residents from Puerto Rico who needed to evacuate the island, according to The Miami Herald.

One Twitter user Emily Vacher pointed out that Trump has previously slammed Obama's federal relief efforts for the victims of Hurricane Sandy and that "there no excuse why people don't have electricity or fuel yet." Vacher believes that that "different take on the storm in NY and one in PR" was due to "skin color."

Glover reacted, "Don't let this man stay in office or we'll never get his jackboots off of our necks."

Trump Once Criticized Obama For Golfing

Trump once criticized President Obama for golfing instead of visiting the flood zones in Louisiana in the worst natural disaster to impact the state since Hurricane Katrina. Someone pointed out that Trump was a "hypocrite" for going golfing during Hurricane Maria.

Trump Said He Would Barely Leave The White House

An analysis by The Washington Post showed that Trump has spent more than half of every month since he was inaugurated at various private golf courses and resorts. He has also spent three times as many days at leisure as Obama. During Hurricane Maria and the aftermath of the wreckage, Trump was vacationing in his golf course in Bedminster, New Jersey.

Actress Amber Tamblyn tweeted on Saturday, "No matter who you are, please remember the actions of this President today when it comes time to vote in 2020. He needs to go."

Twitter user Raynell Castiel then replied, "2018 too." Conservative writers have pointed out that Trump could likely face impeachment proceedings if Democrats take the majority control of the House of Representatives in 2018.

One Of These Things Is Not Like The Other

After Trump criticized Cruz on Twitter, multiple photos surfaced of the San Juan mayor wading through flood waters and hugging survivors in the aftermath of Hurricane Maria. Twitter user Chet Powell reacted to the images compared to one of Trump golfing, saying "You're right. We're seeing some damn 'poor leadership' right now."

Until He Does Something Horrible Next Week

Starfish Media CEO Soledad O'Brien tweeted about Trump: "The disaster unfolding in Puerto Rico will be Trump's Katrina. His lack of response, then tweets attacking Puerto Ricans will live in infamy.

"Until he does something even more horrible next week," Twitter user Jamie McCall replied.