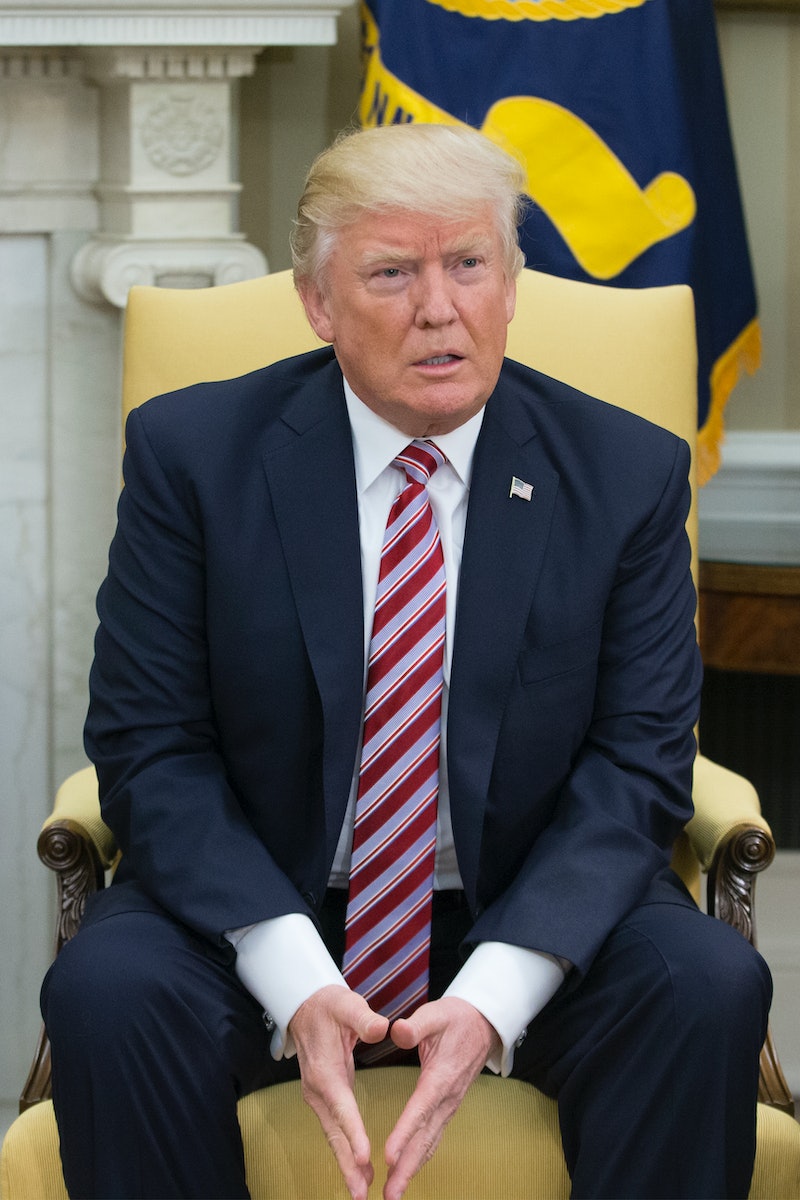 On Tuesday, The New York Times reported that, according to a memo written by James Comey in February, President Donald Trump asked the then-FBI director to end the investigation of former national security advisor Michael Flynn, his who was forced to resign after it became clear he had misled the vice president about his exchanges with the Russian ambassador to the United States. This Trump administration headache was hot on the heels of Monday's Washington Post revelation that Trump reportedly revealed code-word classified information to Russian diplomats, leaving the president embroiled in a whole new potential Russia scandal (different from the one about Russian involvement in the 2016 election). Now, Americans are discussing impeachment in a way they haven't in years. According to a survey from Public Policy Polling published Tuesday, 48 percent of Americans think the president should be impeached, compared to just 41 percent opposing.

But an actual impeachment would still be an unbelievably unlikely and difficult event. In all of American history, only two presidents have been impeached —Andrew Johnson and Bill Clinton — and another, Richard Nixon, resigned with an impeachment imminent. The rules of impeachment are hard to discern, even by expert legal analysts. And the effects of it are wide-ranging.

The biggest effects of an impeachment come, of course, in the political realm. "Impeachment is not a legal or constitutional affair or proceeding. It's a partisan matter. Just that simple," Jody Baumgartner, a political science professor at East Carolina University and editor of the book Checking Executive Power: Presidential Impeachment in Comparative Perspective, tells Bustle.

Baumgartner explains that regardless of language in the Constitution about "Treason, Bribery, or other high Crimes and Misdemeanors," the decision that a president is unfit for office is a political one, based on political imperatives of the president's opponents far more than legal pretexts. Impeachments occur with presidents are already massively unpopular — and, thus, when it's in the political (not legal, or moral, or personal) best interest of elected officials to remove them.

At this point, Donald Trump's popularity is hovering close to 40 percent approval, according to FiveThirtyEight. That is unprecedented for a new presidency, but still within the bounds of normal presidential popularity.

The aftereffects of impeachment would depend largely on how much support the president still has and how fired up those supporters are; we have no idea how much that would change, even if the president's party turned on him in the midst of an impeachment.

"I think it is reckless and unprofessional to speculate now about how the public (supporters, opponents, and undecideds) might react to some future effort to impeach President Trump," Michael Kagay, former Director of Public Opinion Research at The New York Times, writes Bustle in an email. "Moreover, there simply have been too few examples of presidential impeachment to generalize about them. There is no reason to expect a hypothetical Trump impeachment to unfold in anything like the Clinton example."

Moreover, even if it were to hit the point where Trump was impeached and then forced out of office, his exit would be unlike any the country has ever witnessed.

Paul Musgrave, an assistant professor of political science at University of Massachusetts Amherst, who had previously worked for the Richard Nixon Presidential Library, tells Bustle:

We imagine that the way that Nixon left office is the natural way that presidents would leave office — you go off to San Clemente and you're never heard from again, or at least not until two or three years later when you write a book or you get a TV memoir. But you sort of stay off the spotlight. Donald Trump, if he's impeached or removed, is not going to go quietly.

That's likely no surprise to any American. Think of the tools Trump would still have at his disposal. "If Donald Trump were impeached or removed, the next day he'd still have his Twitter account. He'd still have a good chunk of the American electorate — let's say 20, 25 percent of people who'd approve of what he'd done," Musgrave says.

One of the reasons that Nixon's impeachment ended up leaving American politics intact, according to Musgrave, was that Nixon started to retreat from the presidency as Watergate heated up, with Vice President Gerald Ford taking over more day-to-day operations. "The Nixon presidency goes into an interregnum, and Vice President Ford, during those 10 months or so, plays an increasingly active role in policy making and governance," he says. This meant that when Nixon left office, Ford was able to step in more easily than many others would have.

The comparison to Vice President Mike Pence, who comes to the Trump White House with experience as a congressman and a governor and has been a lead liaison between the president and Congress, is not lost on Musgrave. And he points out that with an executive branch still largely missing political appointees, Pence would be able to begin his administration with a flurry of competent activity.

"It would look like an unparalleled dynamo of productivity," Musgrave says. "Because they would be able to come in and really make the government work again."

However, for most of Trump's critics who have been worried about his presidency since the day after the election, seeing a President Pence would likely be cold comfort.