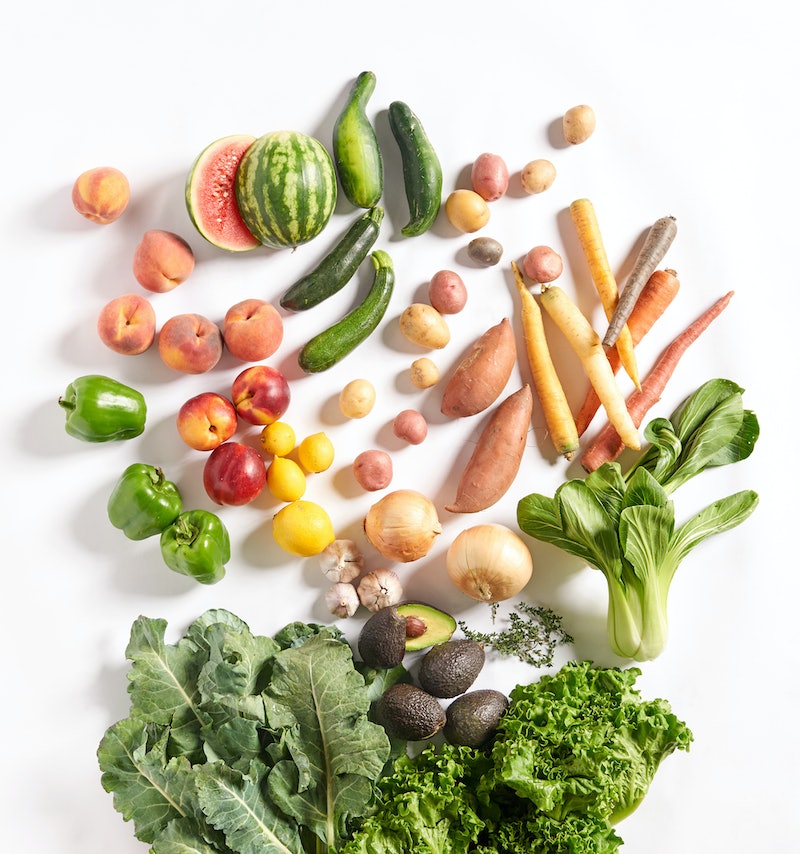 You can get a monthly subscription box for pretty much anything these days, and it's not really a novel concept anymore. But most of the things we receive thanks to monthly memberships aren't things we actually need, which makes the whole thing feel like a luxury. Enter Imperfect Produce, a subscription service that reduces food waste and saves you money in the long run. Imperfect Produce subscription boxes send you "ugly" fruits and veggies at a serious discount, and it's a genius idea.

It's natural for us to be drawn toward shiny apples without any dull spots, or carrots that are ramrod straight, but unattractive produce is still very much edible. Unfortunately, consumers tend not to purchase produce with superficial defects, leading to producers tossing out perfectly nutritious fruits and veggies. A study from the University of Vermont found that the average American wastes nearly a pound of food every day, and one reason is that we're likely to toss food that's bruised or has brown spots. Food waste costs us billions of dollars each year, and it contributes to the stunning amount of trash in our landfills.

That's why Imperfect Produce buys from farmers and growers who may otherwise throw away fruit and vegetables that doesn't meet grocer standards. "They either had to leave it behind in their field and let it go to waste, or would break even or even lose money selling it to a processor or as animal feed," the company's website says. "We offer them a better alternative: a fair price for what they grow and the satisfaction of seeing it end up on people's tables instead of in landfills."

The company was founded in 2015, and it currently offers delivery service in Los Angeles, the Bay Area, Portland, Seattle, Chicago, Indianapolis and Milwaukee. You can sign up for a box of organic produce, mixed fruit and veggie, all fruits, or all vegetables. A 25-pound box of mixed fruit and vegetables costs about $25, while a 9-pound box is only $13. For comparison, a 20-item case of snacking fruit from a traditional grocery delivery service is $28.99. It sounds too good to be true, but when you consider the aversion we have to eating food that doesn't look picture-perfect, the low prices start to make sense.

Imperfect Produce isn't just providing cheap food — they also want to change our perspective on what food we eat. When you get past the mental block of buying food that looks a little different, you're able to save money and help the environment at the same time. The boxes are also customizable, so you can choose exactly which fruits and vegetables arrive at your door. You're also assigned a delivery day based on where you live to reduce the company's carbon footprint, according to the company's website.

But some people have raised concerns about whether start-ups like Imperfect Produce might hurt services that relied on donated "ugly" produce to combat food insecurity; according to Food & Wine, some farmers who would have donated their ugly produce to food banks are now selling it to companies instead. But Imperfect Produce says on its FAQ page that there's enough ugly produce to go around, and we're wasting more food than we could ever consume. "We recognize that fighting hunger and fighting food waste are interrelated, however, which is why we regularly donate thousands of pounds of produce to our food bank partners across the country and continue to help make healthy, delicious food accessible and affordable for everyone," the company says.

Even if Imperfect Produce doesn't (yet) deliver to your zip code, you can take meaningful steps to reduce food waste. If your lettuce starts to wilt or your bananas get a little soft, you can still eat them instead of tossing them in the trash (or freeze them to throw in a smoothie later). And remember that expiration dates aren't set in stone, according to the United States Department of Agriculture, so you don't have to automatically toss something that's past its "sell by" date. Just make sure the produce isn't giving off a bad odor, or hasn't become wet or moldy, though if you have any doubt about a food's freshness, it's always safer to toss it than to consume it. But, if we all committed to eating food that was a bit imperfect, yet still perfectly fine, both the environment and our bank accounts would benefit.