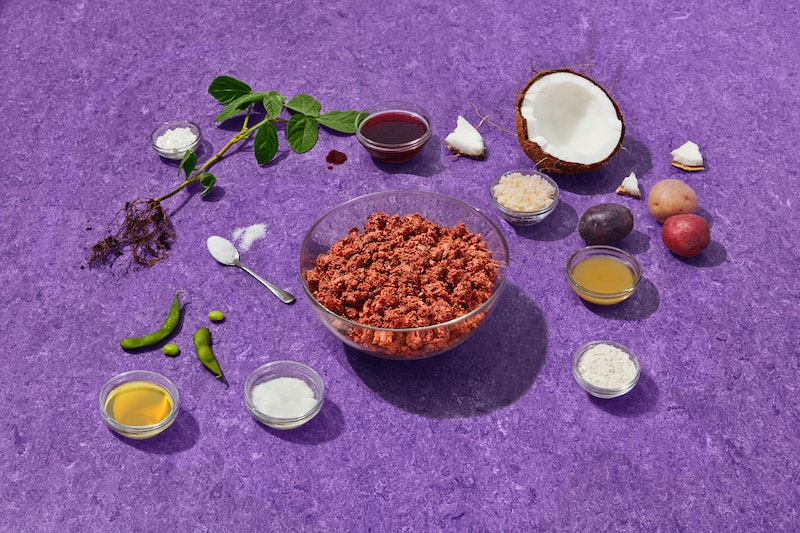 Impossible Foods has been blowing minds since 2016 with its plant-based faux-meat products. With the introduction of the Impossible Burger as its first breakthrough product, the plant-based company has made it easier for meat-eaters, vegans, and vegetarians alike to try out more eco-friendly, protein-filled food options. And on Jan. 6 at the 2020 Consumer Electronics Show, Impossible Foods announced a pork alternative with ingredients that imitate the taste and texture of the real thing.

In a promotional video release on the Impossible Foods website, the company explains why it created Impossible Pork in the first place. Pork is actually the most widely eaten meat in the world making up 36% of the world's meat intake, according to the Food and Agriculture Organization of the United Nations.

Impossible Foods explains that heme is an essential molecule found in every living plant and animal. It's super important because it's essentially what makes meat taste like meat, as Impossible Foods likes to put it. And through research and trial-and-error, scientists at the alternative-meat company have been able to create a plant-based heme that passes the vegan test and — just as importantly — the taste test.

Along with tasting apparently "scary-similar" to real pork, according to CNET, Impossible Pork has less calories, total fat, saturated fat, and cholesterol than regular pork, Engadget reports. Though, the meat-alternative does have more sodium than real pork, with 420 mg versus the original 80 mg in a 4-ounce serving. But with either option, you're getting the same amount of protein.

The new Impossible Pork product was debuted at CES 2020, a global stage for innovative consumer technologies. The innovation came from the desire to create meat alternatives that focus on sustainability and make less of a drastic impact on the environment. According to Impossible Food's 2017 Sustainability Report, it takes 95% less land and 74% less water to make one Impossible Burger than it does to make a beef burger. With similar ingredients and processing, Impossible Pork is projected to have the same type of impact.

Whether you want to make the switch for dietary reasons, environmental reasons, or just because you want to see how similar it tastes, you can add Impossible Pork to the list of foods to try out once it's released.