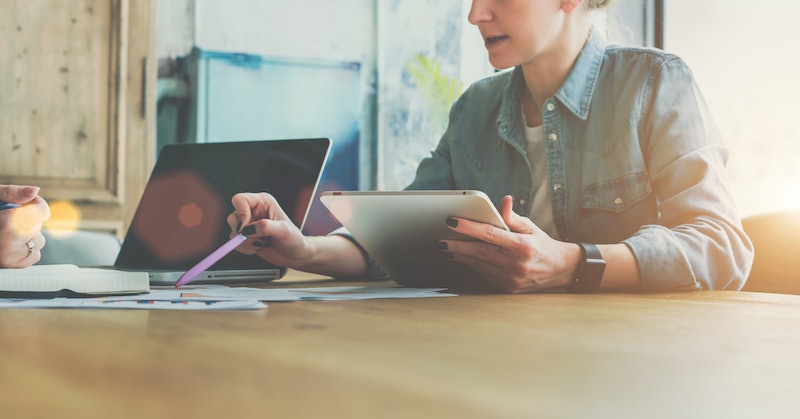 Every now and then, a phrase comes along that perfectly describes a feeling or experience that a lot of people have had, but were never quite able to put into words. That was definitely the case with "impostor syndrome", and now, the phrase has been added to Dictionary.com. This just goes to show how much of a chord the phrase struck with people and how big of a thing dealing with impostor syndrome has become.

As the site announced on Wednesday, April 3, "impostor syndrome" is listed on Dictionary.com along with over 300 more new words and definitions. The definition for "impostor syndrome" reads, "anxiety or self-doubt that results from persistently undervaluing one’s competence and active role in achieving success, while falsely attributing one's accomplishments to luck or other external forces."

Its surge in popularity — as evidence by its entry into the dictionary — shows that impostor syndrome is something that a lot of people can relate to.

"Impostor syndrome is so widely talked about because of millennials and women," says Foram Sheth, the Co-founder of career and life coaching business Ama La Vida, to Bustle. "One in 3 millennials experience a form of impostor syndrome, and with the focus on women in the workplace, more and more professionals are talking about experiencing a form of it."

If you often feel like an impostor, then you probably want to know what you can do about it. When you're experiencing it in the moment, Sheth suggests recognizing and putting a name to what you're feeling ("Naming it takes away most of the power"), giving yourself a pep talk, and disconfirming the notion that you're an impostor ("Think about your biggest successes and accomplishments. Go through every detail to remind yourself that you didn’t get lucky").

As for battling the feeling long-term, Sheth says to Bustle, "First recognize what beliefs you hold about yourself that make you think you are an impostor. In other words, what do you think about yourself? What stories have you been telling yourself about your success and accomplishments so far? And then fact check those stories ... Did you get lucky a thousand times or did you proactively put in effort to succeed?" She also suggests recognizing the type of impostor syndrome you are experiencing and working on building your confidence each day through activities like self-affirmations and journaling.

Liz Wessel, Co-founder and CEO of WayUp, which helps with job searching and career advice, suggests not just telling yourself that you're competent and worthy, but actually receiving confirmation of your strengths from others. "I'd say the biggest piece of advice is to speak with your manager about your impostor syndrome," Wessel explains to Bustle. "The best way to combat it is to get feedback on what you may be doing better than you realize. By being open with your manager, you can get real-time feedback on what you may actually be doing a great job at that you otherwise may lack confidence in."

While impostor syndrome has become a well-known in recent years, it's nothing new. The phrase itself can be traced back to a 1978 article titled "The Imposter Phenomenon in High Achieving Women: Dynamics and Therapeutic Intervention" by psychologists Pauline Clance and Suzanne Imes. While their study was focused on women, men experience impostor syndrome, too.

The more recent interest in impostor syndrome was, as Jezebel reports, due in part to a 2012 TED Talk from Harvard Business School professor Amy Cuddy. There's also the fact that people are able to look to more and more self-help articles on the ever-expanding internet and, as i-D notes, social media has given rise to more self-doubt as people compare themselves others.

The entry on to Dictionary.com is not the first time the phrase has been added to a popular dictionary. In June 2018, "impostor syndrome" was added to the Oxford English Dictionary. Meanwhile, Merriam-Webster has featured it in its Words We're Watching series, which is about "words we are increasingly seeing in use but that have not yet met our criteria for entry."