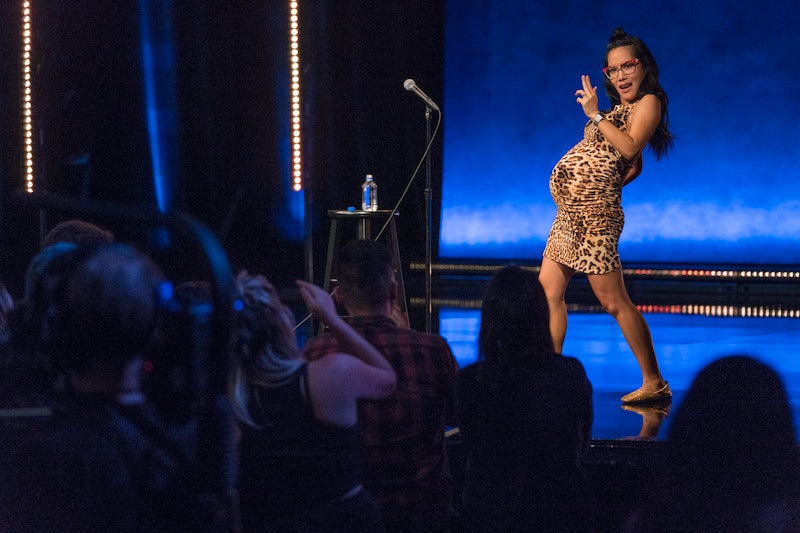 Two years after her first Netflix special, Ali Wong: Baby Cobra, premiered, the comic is back on the streaming service with some new material. She was very memorably seven months pregnant in Baby Cobra, and now that she has a 2-year-old, she has even more maternal knowledge to share. In true Wong fashion, her new special is filled with graphic descriptions and grody details — this time, about being a mom to a toddler. With that being said, there is one joke about motherhood in Ali Wong: Hard Knock Wife that embodies her character and her brand to a T.

In Baby Cobra, Wong's main bit spotlighted her dream of being a housewife, of staying home all day, eating snacks, and watching Ellen. But now that she has experienced what it's really like to hang out at home alone with a newborn, she's had a change of heart. In her first bit of Hard Knock Wife, she highlights how frustrating and draining providing full-time care to a newborn can be — something that's a little more taboo to talk about than the joys of being a new mother, which is what many people tend to focus on when the topic is brought up. Being one of the first well-known comedians to perform pregnant, it's pretty obvious that Wong isn't afraid of talking about topics that others would like to gloss over.

“I have not been performing that much at all within the past … two years," Wong says. "Because two years ago, I gave birth to a baby girl." The audience cheers. She says that when she did return to the comedy scene, people would ask her about the baby, to which she would reply: "Listen, I've been with my baby girl since she was born all day, every day. And I love her so much. But I'm on the verge of putting her in the garbage."

She says she tried to be a stay-at-home mom for two months, and that was enough for her:

“I tried being a stay-at-home mom for eight weeks. I like the stay at home part ... not to crazy about the mom part, that sh*t is relentless! I was stupid and naive and I thought that being a stay-at-home mom was about chillaxing, getting to sh*t in your own home, watch Wendy Williams, and go out to brunch with your sassy girlfriends. I did not understand that the whole price you had to pay for staying at home is that you gotta be a mom ... You get no 401-K, no coworkers — you’re just in solitary confinement all day long with this human Tamagotchi that don’t got no reset button, so the stakes are extremely high!"

Wong continues to touch on other real struggles she has faced as a mother, including the necessary butt-sniffing to check for a full diaper ("The [Tamagotchi] will at least tell you when it poos."), breastfeeding ("It is chronic, physical torture!"), unpaid maternity leave in the U.S. ("Maternity leave is not just to bond with the baby … [it's] for new moms to hide and heal their demolished-ass bodies."), and getting asked the age-old question, "How do you balance family and career?" to which she responds, "Men never get asked that question. Because they don't."

Jokes aside, Wong doesn't regret getting her big break by becoming known as the pregnant comedian on Netflix. "You know what male comics can’t do? They can’t get pregnant. They can’t perform pregnant," she told The New Yorker. "So my attitude is, just use all those differences." In the same interview, she mentioned that she had been approached about doing a special many times, and she intentionally filmed her first one, Baby Cobra, while she was pregnant. "I thought that if I did it when I was pregnant then I would always associate the baby with a break if I got it," she said. "A couple of female standup comics I know refer to their kids as their Little Career Killers. I was, like, I really do not want to feel that way."

Despite being obviously pregnant on stage again in Hard Knock Wife, Wong doesn't directly reference the forthcoming birth of her second child during her set. However, her Instagram now features a second little human in one of her most recent photos, so it looks like she's ready to take on round two of the "glamorous life" she calls motherhood, and to stay real about it with her fans.

More like this
Here’s Everything Coming To & Leaving Netflix In October
By Jake Viswanath
What’s New On Netflix: Ana De Armas’ 'Blonde' & A Nick Kroll Special
By Arya Roshanian
What’s New On Netflix: Meet 'The Real Bling Ring'
By Arya Roshanian
What Does Nancy Jo Sales Think Of 'The Real Bling Ring'?
By The Editors
Get Even More From Bustle — Sign Up For The Newsletter