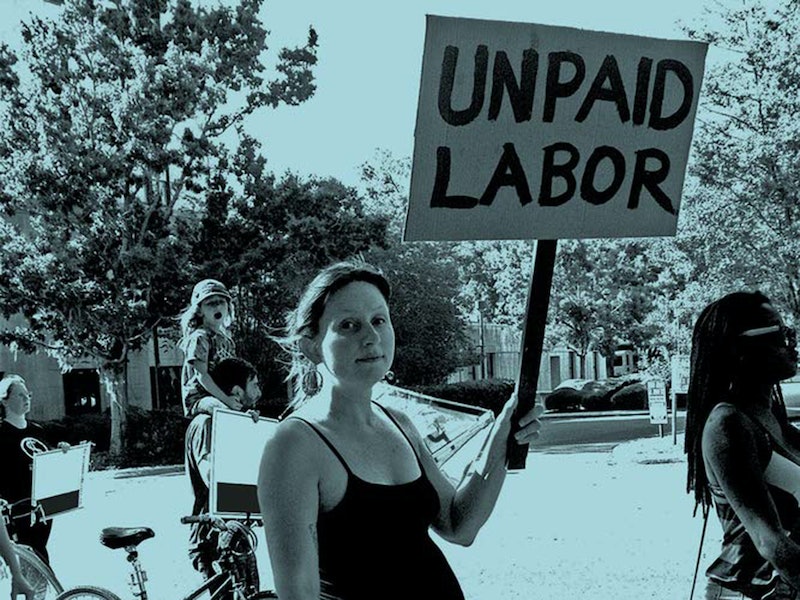 Are people of the United States staging a birth strike? Writer and activist Jenny Brown thinks so. Consciously or unconsciously, some people are responding to a lack of political and social support with a birth strike and an emotional labor slowdown, she argues in her new book, Birth Strike: The Hidden Fight Over Women’s Work.

Brown brings back a rallying cry from 1970s feminists — "Wages for work" — to argue for wages for the "invisible work" that is so often shouldered by women. Earlier this year, researchers from Oklahoma State University and Arizona State University released a study that looked at the behind-the-scenes management of women with children in committed partnerships. (The study did not specify if the women were in committed partnerships with men, though it was implied to be the case that they all were.) The research showed that these women performed a disproportionate amount of invisible labor — scheduling appointments, remembering to buy toilet paper, or signing school permission slips, etc. — which often led to burnout.

Of course, this isn’t true in every family. Not all parents are part of a couple, not all mothers identify as women, and caregiving isn’t always tied to gender. Studies of gay couples and lesbian couples have shown that the division of labor is usually more equitable, though that can change once a child enters the picture. There is still limited research about gender nonconforming parents, but in a family absent cultural gender expectations, the division of labor is likely to be more actively discussed and fluid.

Brown, who has been active with feminist groups National Women’s Liberation and the Redstockings, tells Bustle that as far back as 1989 or 1990 she and other women joked about "the idea that it was getting so hard to have kids that people were on an informal birth strike." The Redstockings, a group of radical feminists formed in 1969 in New York City, who have been among the most outspoken in fighting for abortion access, gathered a group of 23 women in 2015 to talk about why they felt they couldn’t have any kids or couldn’t have as many kids as they originally thought they would. That conversation inspired her book, which includes the testimonies of 17 of those women, plus history and data about reproductive rights, labor relations, and economics — all of which affect the lives of parents.

Brown writes, "For some of us the puzzle seemed impossible to assemble, with missing pieces: we faced unpaid leave, unaffordable childcare, financial insecurity, unstable jobs, unreliable male partners, or high healthcare costs." The third chapter of her book gathers testimonies from women at the 2015 meeting, addressing the life conditions that make having a child, or another child, prohibitive, like long working hours for one or both parents, lack of parental leave, career aspirations, and the cost of housing. The women agreed, Brown writes, "that this should be described as a slowdown or a strike, because we were responding to bad conditions. True, it wasn’t coordinated like a workplace strike and didn’t yet have a clear set of demands, but it’s still a slowdown in resistance to intolerable working conditions."

...it’s "the result of a carefully maintained economic arrangement in which a powerful class of rich people benefit from our work but do not contribute to it."

The wages Brown advocates for aren’t necessarily in the form of a paycheck. Policies in other nations that guarantee free child care and free healthcare are a social wage. The burnout that many people feel isn’t the result of making bad choices. As Brown describes it in the book, it’s "the result of a carefully maintained economic arrangement in which a powerful class of rich people benefit from our work but do not contribute to it."

Each year, fertility statistics are released along with a series of headlines warning that without young, healthy workers the nation’s economy will suffer. The birth rate in the U.S. is now lower than it has been in 32 years. The bargaining power of those who can have children has increased, Brown argues, and they’ve faced a backlash. Rising costs of birth control and restricted access to abortion are meant to undermine the ability to control whether and when one can have children.

"It can also be traced to the undermining of social supports — libraries, parks, all the things that made it easier to raise kids are now under pressure."

One might argue that the load of childcare has always been extreme, so why the labor strike now? Anne Helen Petersen articulated the reasons well in a Buzzfeed article earlier this year. Millennials are the burnout generation. Climbing tuition has made college debt more of a burden than it was for previous generations. Wages have been stagnant for decades while the demands of work have increased. "I think jobs have taken over more and more of our time,” Brown says. "Even studying for school is intensified. It leads to people deciding not to have children or saying, how am I going to fit a kid in affordable housing? It can also be traced to the undermining of social supports — libraries, parks, all the things that made it easier to raise kids are now under pressure. There’s more falling on parents now, especially women."

The idea has even gained momentum among pop culture and political figures, though they might not explicitly refer to it as a "birth strike." Alexandria Ocasio-Cortez asked in an Instagram video whether the decision to have children is a moral question, given there’s scientific consensus that the lives of children are going to be difficult because of climate change.

Miley Cyrus told Elle magazine in July that she wouldn’t have kids because the earth can’t handle it. She and Liam Hemsworth, who have since separated, were among the hundreds of people who lost homes last year during historic wildfires in Southern California. She told Elle, "We’ve been doing the same thing to the earth that we do to women. We just take and take and expect it to keep producing. And it’s exhausted. It can’t produce." She refuses to hand down to a child the problems facing the planet today, she explained.

Prince Harry voiced a similar opinion in a conversation with anthropologist Jane Goodall in the September issue of British Vogue. He said, “I’ve always thought: this place is borrowed. And, surely, being as intelligent as we all are, or as evolved as we all are supposed to be, we should be able to leave something better behind for the next generation." He and wife Meghan Markle, who welcomed son Archie in May, plan to have a "maximum" of two children.

British singer Blythe Pepino founded an organization called BirthStrike, which, as of June 2019, had more than 300 members. Pepino has said in interviews that she loves her partner and wants a family, but it feels wrong at this time to have children. She appeared on FoxNews twice, once in conversation Jesse Waters and once in an interview Tucker Carlson, and calmly explained both times that she fears what life would be like for her child if climate change is not addressed by politicians. Carlson responded, "So you’re saying the species is over … we should, in effect, as a group end it, commit suicide?"

To be sure, none of the people staging a birth strike are saying others should do the same. If some people are questioning the decision, Brown would like them to come together and talk openly about it. She tells Bustle that people should form groups wherever they are. "You can do it as a book group or just gather friends," she says. "We’ve found it really eye opening.”

In her book, she urges consciousness-raising. The term, she writes, “was coined in 1967 to describe a particular type of political meeting, in which women went around the room answering a question about their lives and then compared data and drew conclusions based on the testimony.” The appendix of the book includes questions to consider as a group (they are also available online) and guidelines about including diversity of ages, races, jobs, and orientations. "We have a lot of feminist consciousness," Brown says. "In order to make good on it, we have to change some structural things."