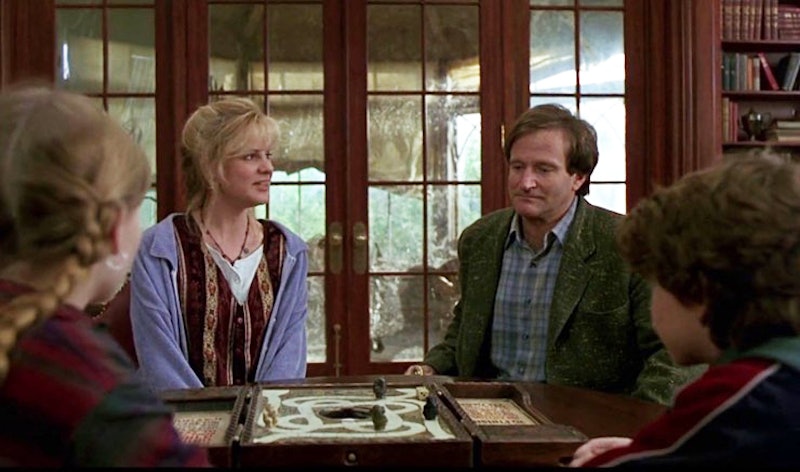 In news that will absolutely make you feel old, Jumanji will be a video game in the new movie starring The Rock, rather than the board game of the original Robin Williams film. I officially don't understand the World anymore. As revealed by The Hollywood Reporter, the first footage from Jumanji: Welcome To The Jungle (as it has been officially retitled) was revealed at Sony's Cinema Con panel Monday night, and it featured a major twist on the original story: the four main Jumanji characters are video game avatars. I want to accept change, you guys, but my inner child is secretly weeping inside while I write this.

Showing four high school kids in detention together who are ordered to clean out the school basement, the footage reveals them discovering an old video game console, featuring Jumanji. They each pick a character, without realizing that they'll then be transported straight to the jungle as that actual character. Naturally, this means that the nerdy kid ends up inhabiting the buff body of Dwayne Johnson's character, and that the popular girl ends up trapped in the jungle as Jack Black's avatar.

All of which, to be honest, sounds like terrific fun. And I'm sure it'll play out beautifully, and with great hilarity, when we all finally have a chance to feast our eyes on Jumanji: Welcome To The Jungle. But the very idea of Jumanji becoming a video game, rather than a board game, just doesn't sit well with me. In fact, I feel an intense desire to defend the board game of the original movie. Because it was the heart of the original movie.

First, it's worth mentioning that I believe that board games are still just as relevant now as they were back in 1995 when the original Jumanji was released. In fact, back then, video games were probably even more of a big deal than they are now. As a fairly new technology that was making exciting new advancements all the time, video games were the ultimate in fun and coolness for kids across the world.

But that's exactly what made the premise of such a creepy old board game like the one in Jumanji so alluring. For many '90s kids, board games felt both familiar and a little peculiar. They were something that we all knew and had played with, even if we'd replaced them with our Mega Drives and Super Nintendo systems. In many ways, Jumanji felt like a direct response to how kids were rejecting the traditional board game in favor of their video games, as though we were watching the board games of our youth taking revenge on us for replacing them.

Which is fair. As Jumanji proved, a board game can be just as thrilling and exciting as any video game is. And part of that was due to them requiring some use of your own imagination to bring them to life. Honestly, that's pretty magical.

But there was something else to the fact that Jumanji was a board game that made it feel all the scarier to us as children. While, sure, a video game may feel more immersive to the player, in many ways, it lacks the physical engagement of a board game. As a child, Jumanji was terrifying because it felt believable in some way that this ornate, antiquated wooden box could in fact be a portal to another world. As the tagline of the board game said, Jumanji was "a game for those who seek to find... a way to leave their world behind." And part of that world that we were leaving behind was undoubtedly one full of burgeoning technology, and newer, more exciting ways to play games.

In many ways modern video games feel immersive enough that players feel part of the action already. And there's nothing particularly threatening or scary about that. But watching all that insanity erupting straight out of an old, wooden board game? That was utterly disturbing stuff in 1995, and it would still be utterly disturbing in 2017, dammit. I can't wait to see how the Jumaji video game plays out in the new movie, but I think I'll probably always be way more scared of that board game that defined my childhood.