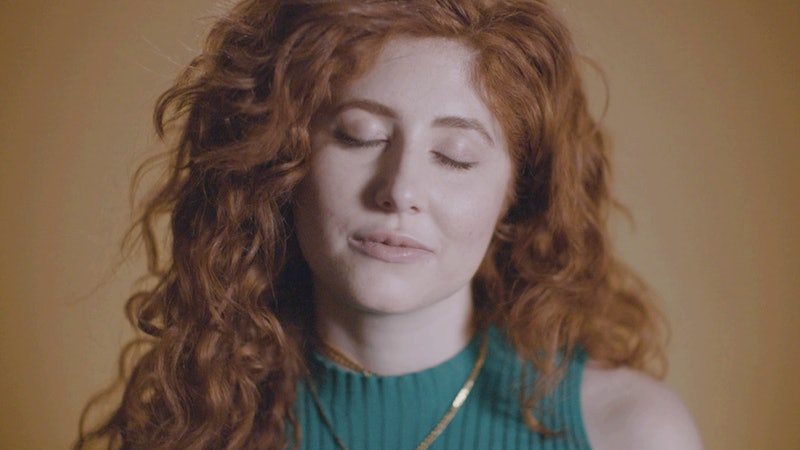 In Diagnosis Diaries, a stand up comedian copes with lyme disease

In her senior year of college, actor and stand-up comedian Tori Piskin started to feel like The Exorcist. "I was having blurry vision, I was sleeping 14 hours a day — something was just off, I felt it," she tells Bustle in the latest episode of the YouTube series, Diagnosis Diaries.

She was eventually diagnosed with Lyme disease, a tick-borne illness that can cause exhaustion and interfere with the nervous system. "I remember telling my friend across the street [about my diagnosis] and she said, 'Oh, my dad had it four times! You're going to be fine!' And it really just was never fine again."

Lyme disease is relatively common; around 300,000 people are likely infected in the United States every year, according to the Centers for Disease Control and Prevention (CDC). The vast majority of cases are treated with a course of antibiotics. Piskin expected the disease to disappear relatively quickly, like the flu, but instead became one the few people who experience Lyme disease symptoms for years after they've been treated. A collection of studies estimated that fewer than 10% of all Lyme patients continue to have symptoms like numbness, fatigue, and pain.

"It's been one word: hell," Piskin says. "Lyme disease is like that guy you're not in a serious relationship with but will come in and out of your life when he feels needy. Oh! It's been a month! He's texted!"

As with many other people with chronic Lyme disease, her symptoms appear unpredictably. "It comes up out of nowhere," she says. She describes the fatigue as intense, as if she has rocks on her body. When she was working a 9-to-5 job, she'd escape to the bathroom stall, rest her head on a toilet and have naps throughout the day. She says her headaches feel like a person with a hammer banging inside her skull.

She also experiences regular blurry vision. "You know that feeling when you wake up in the middle of the night and your eyes take a little while to adjust? I was having that throughout the whole day."

When Piskin was first diagnosed with Lyme, she had no concept of its long-term health effects, including possible damage to the neurological system. "I had no idea it was going to be this long health journey," she says. "I think the hardest thing to treat is when you have neurological symptoms, and you don't really know how to describe them and you don't know why. When it was really bad, I felt like I was in a scary movie walking around the city, and any moment you'd feel like something was going to jump out."

At one point, she was bedridden for nine months with an IV port in one arm for long-term intravenous antibiotic treatment. This, she says, was one of the only times that people believed she was sick. "That's when I started editing and making my own videos," she says. "It helped me find another part of my comedy that I would not find otherwise." She now works freelance, creating and editing videos and performing stand-up. "I can really make my own schedule. If I need to close my eyes at 4 o'clock, I can," she says.

Performing comedy is her escape. "I've never experienced the symptoms while performing," Piskin says. "Even if I'm experiencing symptoms before, the moment I go onstage, it all goes away." Jokes about her condition also connect her to her community and create a sense of solidarity. "I'll have shows where I do Lyme disease jokes and people will come up to me and say, 'I have Lyme, I've struggled with it, it's really nice to hear somebody else talk about that.'"

She views herself as lucky. Lyme disease can be very hard to detect, and many people are misdiagnosed for years with other autoimmune or pain conditions. People may test negative for Lyme when they actually have it, or test positive when they have another infection. "I feel so lucky that I got to get the treatment," she says.

Piskin is still figuring out how to cope with her Lyme disease but says it's much the same for anybody with an autoimmune disorder. "Everybody has something they deal with," she says. "It's OK to say your struggles."