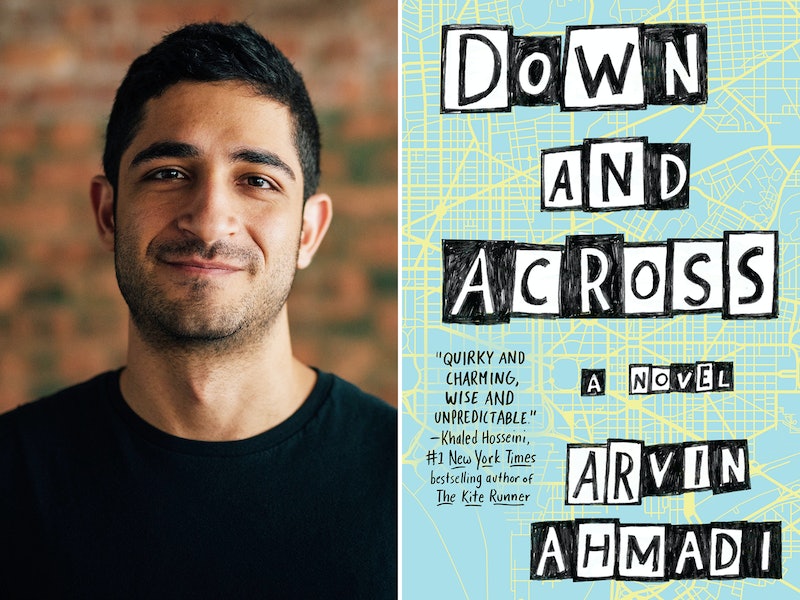 If you're looking for more diverse YA releases, 2018 is shaping up to be your year. From fantasy worlds filled with old magic and Civil War era zombies, to contemporary novels about crucial issues like terrorism and police brutality, the class of 2018 is promising powerful stories that are both timely and unique. And one of those books is Arvin Ahmadi's debut novel, Down and Across, out Feb. 6 from Viking Books for Young Readers. Before you pre-order your copy, check out the exclusive excerpt from the book below!

Down and Across follows Scott Ferdowsi (real name: Saaket) who excels at one thing: quitting. Writing the Great American Novel? Three chapters. His summer internship? One week. His friends all know exactly what they want to do with the rest of their lives, but Scott can't seem to figure it out.

With college applications looming, Scott is under more pressure than ever to settle on a career path, like engineering or medicine. Desperate for help, he sneaks off to Washington, DC, to seek guidance from a famous professor who specializes in "grit," the psychology of success. He never expects an adventure to unfold out of what was supposed to be a one-day visit. But that's what Scott gets when he meets Fiora Buchanan, a ballsy college student whose life ambition is to write crossword puzzles. When the bicycle she lends him gets Scott into a high-speed chase, he knows he's in for the ride of his life. Soon, Scott finds himself sneaking into bars, attempting to pick up girls at the National Zoo, and even giving the crossword thing a try — all while opening his eyes to fundamental truths about who he is and who he wants to be.

If you just can't wait until Feb. 6, 2018 to get your hands on this book, you're in luck, because you can start getting acquainted with Scott Ferdowski right now. Check out the entire Prologue from the book below:

Down and Across by Arvin Ahmadi, $18, Amazon

Eight mornings before running away, I found myself at McDonald’s, wondering about the direction of my life. It was one of those moments that should have felt important. I should have said to myself: Hey, Self! You’re having a Pivotal Moment in a Sentimental Place. On a scale of 1 to Serious, I should have rated this occasion at least a 9. But I didn’t. My Serious Scale didn’t even register. Not a single cell in my brain cared to define that morning in the grand scheme of things. Or in any scheme of things, really.

That morning I wondered about dirty tables. The one in front of me had almost certainly just been wiped down, still freshly wet and slippery. I imagined the motions the McDonald’s employee made cleaning that surface: up, down, up, down. Left to right. Loop-de-flippin’-loop, like a drunk man on a Zamboni joyride. Still, the table reeked, so I knew they cleaned it with a dirty rag. This conundrum hijacked my focus. On one hand, sure, it was better for the environment to clean hard surfaces with a rag. But then, wasn’t the rag just transferring gunk from one surface to another?

“Pay attention,” he snapped. “I’m trying to understand what you want.”

Right. My dad. He clenched his hands tight, the skin bunching up around his knuckles. I felt guilty. Not for anything I had actually done, but for what I wasn’t doing.

We sat at our usual booth in the very back. It was like our boxing ring. In one corner: Me, Scott Ferdowsi, my lanky five-foot-ten frame slouched like a golden arch. Fighting to quit a summer internship that hadn’t even begun yet. In the other corner: My dad. Fighting to keep me on the right track, any track, because I’d been known to derail.

“I know what I don’t want,” I said, stabbing my plastic fork into a rubbery glob of eggs. “I don’t want to look at microscopic mouse poop for the rest of my life. Research is boring.”

My dad chuckled. “What could be more exciting than mouse poop?”

I glanced over at the table next to us. A girl in a sparkly Frozen costume was stomping her My Little Pony toy into her hash browns.

“Horse poop,” I said. “Perhaps I will become an equestrian.”

Dad scrunched up his face. “Saaket bash,” he hissed. Be quiet.

“When are you going to get serious, Saaket? This is your life. You need to stop playing games and plan for your future.”

Bingo. It would be his usual lecture. I rolled my eyes and slid lower into the tattered cushion to get comfortable. If there’s one thing Iranian parents love more than chelo kebab and their children, it’s making a point.

“You’re all over the place,” he said, waving his hands frantically. “Look at the opportunities you’ve already screwed up. High school! You get accepted to a very nice high school, but you hardly study. You’re pulling lousy grades.”

If there’s one thing Iranian parents love more than chelo kebab and their children, it’s making a point.

“Last summer. I got you a job with Majid’s law firm. You quit after three weeks.”

“And now, after I pulled every mediocre connection I have to get you an internship at the university lab, you’re giving up before you even start.”

He kept going, as if he hadn’t just put me down over and over: “You know, I was reading a study the other day by a very famous professor at Georgetown... Cecily Mallard. She’s a genius, Saaket. Really! They just gave her an award that is specifically for geniuses. The genius award, it’s—”

My dad paused dramatically and pointed his finger upward, à la eureka. “Grit,” he said. “She discovered that the best predictor of success isn’t IQ or how wealthy your parents are, or even your grades. It’s grit. Do you know what that is?”

“It’s a person’s ability to stick with something. To focus. To really follow through. Tahammol. It’s treating everything you do like a marathon, not a sprint.”

“Come on, Dad, a summer internship isn’t a marathon. It’s, like, the JV track meet that nobody watches. I don’t need a participation ribbon for—”

"It’s treating everything you do like a marathon, not a sprint."

“Scott,” I said curtly. “It’s Scott. I’ve been going by Scott since kindergarten.”

“Sorry,” he replied, only half-sincere. “Scott, you’re missing the point. When you set your mind on something, you need to give it a shot and persist.”

“Yes, mouse poop,” he said, gritting his teeth. “You were excited about it a few weeks ago. You were cracking jokes: ‘poopular’ this and ‘micropoopic’ that.”

I buried my face in my hands, wondering if my dad was at all embarrassed by the words he had uttered in a public place. Probably not.

He sighed deeply, as if I were the one exhausting him and not the other way around.

“You’re almost seventeen years old, Scott. In a few months you’ll be a senior, filling out applications for college. What in the world do you care about? What do you want to do with the rest of your life?”

“See? That’s exactly the problem!” His eyes lit up. “Pesaram. My son. You need to start thinking about your future. You could study engineering, or you could go to medical school. Those are both respectable fields. I just”—he threw his hands up—“I just want you to care about something, Scott. I can’t think of a single thing you’re gritty about. I’m not calling you a failure, but I only wonder if we should have kept you more focused.”

"What in the world do you care about? What do you want to do with the rest of your life?"

Clearly my dad was calling me a failure. I held my breath as a stream of shortcomings bogged down my mind. My grades. My SAT score. The Earth Club I let wither away like the ozone layer. The mystery novel I got bored with writing after three chapters. All those instruments I used to play.

“Are you paying attention?” he barked. “I need to know you’ll take this internship seriously while your mother and I are away. This is important.”

“Important for you or for me?”

His eyes jumped. “For you,” he said, forcing the words out slowly. “You’re almost an adult now.”

“If I’m almost an adult, then why can’t I go to Iran with you and Mom?”

“Here we go again. We’ll take you one day, I promise, but now isn’t the right time. It’s a critical summer for your future. And with everything going on with Baba Bozorg . . .”

We both got quiet. Dad broke the silence with two taps on the table.

“This is the right plan. You stay home and do your internship. We deal with Baba Bozorg’s health.” His voice cracked, and he forced a smile. “Don’t you always say we should trust you more? Well, here’s your trust. One month!”

“One month,” I repeated.

“June fourteenth to July fourteenth. Precisely one month. I asked the travel agent what kind of discount we would get for such a nice coincidence—”

“We’re coming back on your birthday! I believe that is the opposite of lame.”

“In fact, your mother and I are very cool. We suspect you might throw a birthday party with your fellow interns, and we are cool with that.”

“I’m the only intern. And I’m sure you’ll be calling twenty-four/seven.”

Dad dropped his buddy act. “One phone call a week, that’s all. Look, we’re trying to meet you halfway. Please, focus on your internship.”

I didn’t have it in me to keep arguing, so as usual, I gave up. “Okay, Dad. I’ll do the stupid internship.”

We sat there silently for the rest of breakfast like boxers with their foreheads pressed together, dripping sweat, too tired to throw the last punch. I didn’t finish my eggs. Instead, I imagined my parents in the airplane to Iran, gazing out the pressurized window at the chalky sky and everything beyond it—stars and galaxies and dark matter–type craziness. I imagined the big bang, which created our scattered universe: scattered, but acceptable. Indefinitely incomplete.

I wondered: Why aren’t I allowed to be indefinitely incomplete, too?

The next morning, I hugged my parents goodbye in the kitchen. Once again I didn’t finish my breakfast. I left a few flakes of Raisin Bran in the bowl, dumped it in the sink, and took off to catch the bus to my internship in Philly.

Exactly one week later, I boarded a different bus to Washington, DC.

I wondered: Why aren’t I allowed to be indefinitely incomplete, too?

Everything happened so quickly. I drew a blank as soon as I stepped onto the Greyhound. Technically I was running away. I knew that. The stream of gut-punching, sweat-inducing adrenaline made that much clear, even if it would only be for two days. But for a brief moment I couldn’t recall why I was doing it, like I’d stumbled into the kitchen in the middle of the night but forgotten what exactly I wanted. The reason was escaping me.

Then the bus jolted forward, and I remembered.

Down and Across by Arvin Ahmadi, $18, Amazon