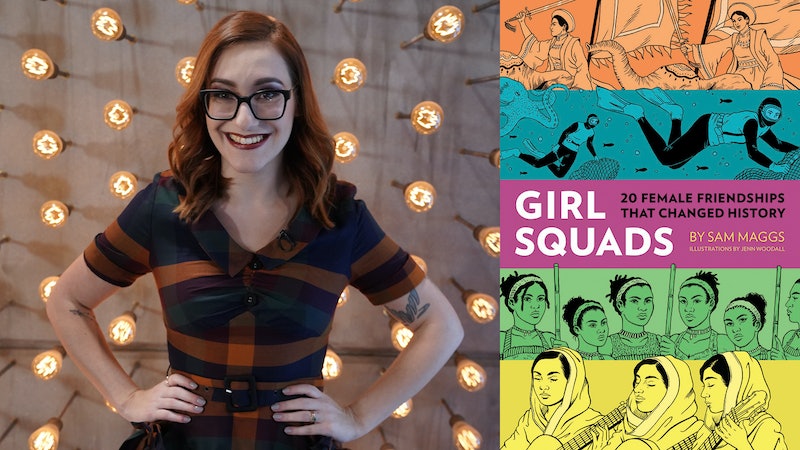 If you've ever gone to a woman doctor who didn't question your right to access birth control, or tell you that the pain from menstruation was all in your head, you can thank some of the first female doctors in Western medicine: Sabat Islambouli, Kei Okami, and Sophia Jex-Blake. The story of their trailblazing careers and remarkable friendships is just one of the inspiring nonfiction portraits you'll find in Sam Maggs's latest book, Girl Squads.

In Girl Squads, Maggs writes about 20 groups of friends who achieved remarkable victories together in the worlds of Olympic skiing, literature, space exploration, and more. You may not recognize many of the names in this book (though Ruth Bader Ginsburg makes an appearance), but you will quickly come to admire and appreciate their work.

Maggs was inspired to write about the stories of relatively unknown historical duos while researching and writing her book Wonder Women, about the accomplishments of women in science. The writer realized she most enjoyed telling the stories of women who collaborated with or had help from other women. Of the stories she wrote for Wonder Women, her favorite was that of Anandi Joshi, the first woman from India to get a degree in Western medicine.

"[Joshi] was able to come over to America to get her degree because she had become pen pals with a young widow in New Jersey," Maggs tells Bustle. "That story just stuck with me so much — a tale of women supporting women overseas from different cultures. You think about the differences between these two women and the things that they shared with each other and how they had so much in common. A story of female friendship across the world in the 1880s was so fascinating to me, and I thought: I want to tell more of those stories.”

Maggs also wrote Girl Squads as a response to what she felt was a lack of books about female friendship — and diverse stories about historical women in general. She attributes this to "Smurfette Syndrome," or the idea that while there are many ways for a man to be characterized, being a woman is stereotyped as a personality trait. With Girl Squads, she wanted to explore the diverse personalities and backgrounds of women throughout history and tell stories that demonstrate how these women used their unique skills and experiences to make a difference in the lives of other women.

"A story of female friendship across the world in the 1880s was so fascinating to me, and I thought: I want to tell more of those stories."

“I wanted to dig into our history and look for a bunch of times where women supported women and worked together to achieve great things, as kind of an example of how we can continue to work together and do that today," Maggs says. She notes that some of the examples in Girl Squads — notably the chapter on The Patriotic Women's League of Iran — are about groups of women who disagreed with one another, but didn't allow those differences didn't hinder their progress. "These women were friends with each other and able to have really civil discussions with one another and argue, and it made them all stronger and made their feminism stronger, and I think that’s a really cool thing to remember."

Likewise, Maggs hopes the book will demonstrate to readers the power of friendship which, she argues, can add significant support and meaning to one's life.

“Friendships between women are equally if not more valid than romantic relationships. I feel like society puts so much importance on getting married and finding a partner and, regardless of gender, your romantic relationship is supposed to be your most important relationship and be all things and fill all voids and fill all needs, and that’s not healthy for your friendships or for your romances. Your friends play a very important role in your life and they’re as much like family as a romantic partner. And I think that’s important to remember as you get older, to not let those friendships fall by the wayside just because you’re told that they’re supposed to be less important, because they’re not.”

“Friendships between women are equally if not more valid than romantic relationships."

The production of Girl Squads itself is a story of two cool women working together to make something good: Each section in the book—Warrior Squads, Political and Activist Squads, Artist Squads, Athlete Squads, Scientist Squads — is illustrated by Jenn Woodall.

“I’ve known Jenn for years, I got to know her through the comic scene in Toronto and I was a huge fan of her Magical Beatdown independent comic," Maggs says. "She’s always been wonderful, and my publisher picked her [to illustrate my book] without me knowing so it really worked out well. I felt so lucky to work with her and get to do a lot of press events together. Her illustrations really bring the stories to life in a way that words can’t alone. To help visualize these women and their stories is so important and her art is just so great.”

You may be daunted by the idea of turning to Girl Squads for inspiration; after all, the women in this book contributed to society in significant, measurable ways. But the lessons of the book — particularly about friendships — are universal.

“Friends often disagree with each other," Maggs says. "A lot of the women in this book don’t share similar opinions — they have different approaches for what they think feminism means, how they think women should approach equality — but they still stay friends. With any friendship, you’re going to have moments where you’re super tight and everything’s going great, and you’re going to have moments where you’ll argue and disagree and it’s important to remember that we’re all in this together, we’re all on the same side, we all want to make the world better at the end of the day.”