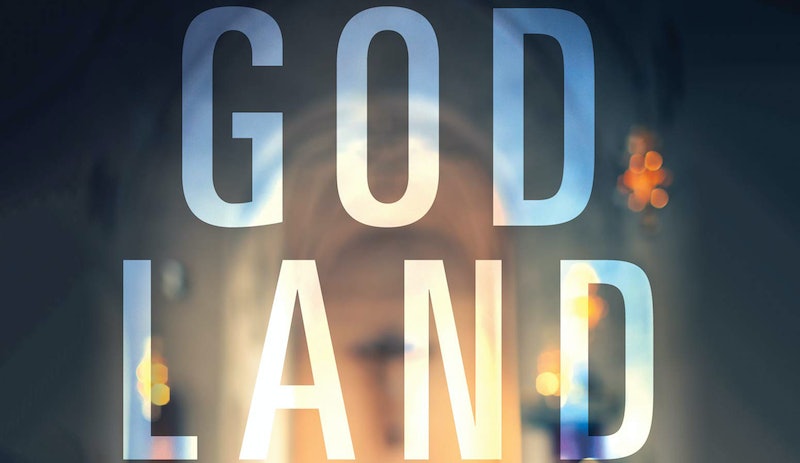 Lyz Lenz thinks the term "Heartland" is "so dumb." "It over-romanticizes [the Midwest] and gives it a kind of soft focused filter like, ‘Oh, it's the Heartland,' which downplays the messy complications of the space,” she tells Bustle. "This is something I think we have a tendency to do, especially in politics. Politicians say, "We need to talk about the average person in Middle America!'"

But who, Lenz wondered prior to the 2016 election, is the average Middle American? After all, the Midwest is 76.6% white, 10.4% African-American, 7.3% Latinx, which makes it less diverse than the nation at large. When it comes to religion, according to the Pew Research Center, 63% percent of adults in the Midwest say they are "absolutely certain" they believe in God, and 73% of Midwesterners identify as Christian.

"So much of Middle America can be understood not by who dominates the conversation but by who is pushed out."

The question of the "average Middle American" led Lenz — who was raised in an evangelical Christian fundamentalist home in South Dakota, went to college in Minnesota, and currently lives in Iowa — to pay particular notice to the way pundits, politicians, and even her Twitter friends talk about the place where she has spent most of her life. It seems to be a cultural "fact" that where Middle Americans live not only affects how they vote but who they are. Which is why, from January 2016 to November 2017, Lenz traveled across the Midwest interviewing ministers, pastors, priests, nuns, and parishioners about religion and faith, particularly Christianity.

In her new book, God Land, she writes, "In the Midwest, 73% of adults identify as Christian: 26% are Evangelical Protestant, 19% mainline Protestant, 22% Catholic, and 26% 'unaffiliated.' These sets of data make up the majority of what belief looks like in Middle America. But I didn’t focus on them solely. So much of Middle America can be understood not by who dominates the conversation but by who is pushed out. But we start here, with these little churches — the vital organs of Middle America."

Lenz’s goal and the mission of her book? To tackle a singular piece of the geopolitical and socially polarized puzzle that is America today: Christianity, and those who are welcomed into the tent versus those who are not.

The book began as an article for Pacific Standard titled, "The Death of the Midwestern Church," which was inspired by the intersection of two major events in Lenz’s personal and political life: First, the disbanding of the church Lenz, her then-husband, and some of their mutual friends started back in 2011; Second, the 2015 Iowa caucus season. Lenz, who lives in Cedar Rapids, had a front-row seat to the political drama.

Lenz explains that the idea for starting a church came from "trying to find a place where we would fit. [My ex-husband] and I were so different that we felt like there were no spaces that fit both of us. He very much did not want to go to the progressive churches I wanted to go to and I had been having so much trouble trying to fit in at those conservative churches he wanted to go to. Then this opportunity came up for us to create our own space."

According to Lenz, the church ended up "imploding spectacularly." It’s been four years since the church disbanded, and still Lenz searches for the "right" church. God Land magnifies this struggle and why Millennials, especially Millennial women like Lenz, have become "less religiously oriented" than older generations and why some younger Millennial and Gen Z women have gravitated away from a Christian denomination, and spirituality, completely.

"But as somebody who has tried to change every church she's been in from the inside, there is no space," she says.

In a separate article for Pacific Standard, Christel J. Manning writes that, "too often young people see organized religion connected to intolerance and abuse: images of Islamic jihadists attacking concertgoers in Paris, or conservative Christians at home waving Confederate flags and opposing the rights of gay couples to marry. For young people with minimal religious commitment, these sights can be a turn-off."

Religion can also be a turn-off for those who recognize how few women, particularly queer women and women of color, are ordained and lead churches. When I ask Lenz if she thinks there is a place for a woman like herself in a Christian church, she is quick to say no.

"I've had some fights with some very wonderful women of faith, who say, 'No, no, you stay in places and you try to change them from the inside.' But as somebody who has tried to change every church she's been in from the inside, there is no space," she says.

What there is space for, outside the church, are discussions about how religion and faith are interpreted individually and how these unique interpretations can provide a better understanding of all Americans, not just Middle Americans.

"I think another hard part about writing about religion is the expectation of somehow giving answers where I don't think there are easy answers."

In the introduction to God Land, Lenz writes that "the stakes of faith here are so personal. The divide in America is a divide that was replicated in my own marriage and my own faith life... I wanted to know why my church failed. But I also wanted to know why churches across America were failing. And after the 2016 election, I wanted to know how and why the things I had always believed about my home — the neighborliness, the community — had all seemed to fail me too. This book is an attempt to understand these wounds, to grieve these losses, and if not to find a way out, then a way forward, through this mess we call America."

As her own relationship with her faith became more complicated after the 2016 election and her ensuing divorce, Lenz thought critically about how grief and loss often makes Americans hunger for answers instead of finding solutions.

"I think another hard part about writing about religion is the expectation of somehow giving answers where I don't think there are easy answers," says Lenz.

One of these easy answers is a growing unease about the future of nostalgia. In God Land, Lenz writes that "nostalgia is no small matter. It was the slogan ‘Make America Great Again’ that swept up the people... during the 2016 election — tapping into a hope and desire for a past never lived but acutely desired."

This yearning for a past that never really happened is "toxic'' says Lenz. "Nostalgia is being used to help us forget the things that we don't want to remember," she says. Nostalgia is also, in Lenz’s perspective, a tenet of Christianity specifically.

"I do think there is a dominant strain of Christianity in which there is this idea that there used to be a better time that we are somehow trying to get back to or a kind of a 'forward thinking nostalgia,' of a better day that we're somehow supposed to be moving forward to. We think that there once existed in America, a time when everybody went to church, were raised by two heterosexual parents, women wore dresses, men wear pants, and everybody was white. There’s a belief that this way of life existed. But it never did. America has always been more complicated," says Lenz.

Complicated because regardless of who you voted for, or where you spend your Sunday mornings, every American is experiencing, in Lenz’s opinion, "a profound sense of loss."

Lenz references an uptick in the suicide rates of farmers throughout the rural, Upper Midwest in the 1980s (913 male farmers died by suicide during that decade) as one source of physical loss and a sustained grief beleaguering Middle America. This epidemic mirrors a modern and serious concern in New York City, where unprecedented numbers of cab drivers have died by suicide. The disintegrating value of their Yellow Cab medallion has made life as a cab driver less sustainable than ever.

Despite this profound sense of cultural loss so many are experiencing, there are few spaces where Americans can properly grieve or find community. Lenz believes that, for a long time, that space was religion. "To lose a church for whatever reason means losing an institution that offered narrative cohesion to your life and your concept of self," Lenz writes in God Land.

But in Chapter 6 of God Land, entitled "Room at the Table," Lenz interrogates the perceived welcoming nature of churches. She writes, "churches are supposed to be places of openness and community. But often... they isolate more than they unite. And the story of who leaves the church is just as important as the story of who stays."

The people leaving the church, or who never went to church at all, are mostly Millennials and Gen Zers. An August 2018 report by Pew Research Center refers to these people as "religious nones" — those who have found spaces outside of the church to identify or align themselves with, because religious teachings leave them with more questions than answers.

One of those questions is about racism. There is a belief that permeates popular culture that true Middle Americans are white, Christian, and conservative. An editor for The New York Times, Jonathan Weisman, surfaced this sentiment when he responded to a tweet posted by Justice Democrats spokesperson Waleed Shahid, who rebutted Missouri Sen. Claire McCaskill's assertion that "free stuff from the government does not play well in the Midwest."

In response to Shahid's tweet, Weisman wrote, "Saying @RashidaTlaib (D-Detroit) and @IlhanMN (D-Minneapolis) are from the Midwest is like saying @RepLloydDoggett (D-Austin) is from Texas or @repjohnlewis (D-Atlanta) is from the Deep South. C’mon."

Weisman's tweet was later deleted, but it has been captured and picked apart in more than one op-ed. (On Tuesday, a spokesperson for the New York Times announced that Weisman had been demoted and had "apologized for his recent serious lapses in judgment.") Was Weisman really trying to say that Rep. Tlaib and Rep. Omar are not true Midwesterners because of their race and their Muslim faith? In an interview with the Detroit Free Press, Tlaib said that people in her faith community often say that she is not "Muslim enough." But on top of that, she also isn’t Midwestern enough?

In God Land, Lenz writes about how discussions of race in evangelical Christian churches in the Midwest are discouraged. Lenz refers to "rejection by a thousand staring eyes" as the way a church will silently push out members who want to confront issues, like race and social justice, by isolating them with silence. In the book, Lenz writes about journalist Deborah Jian Lee's experiences with this type of isolation as an undergrad at the University of Illinois. An evangelical Christian and Asian American woman, Lee says her peers pushed back when she wanted to discuss race. It was viewed as a "transgression." The silence pushed Lee further away from the church and the faith she grew up in.

"America is not going to get better unless we stop being so comfortable."

At her August 1st book launch at Books Are Magic bookstore in Brooklyn, Lenz explained to the audience that struggling with her faith amid a larger national political crisis led to an "emotional excavation" of who she was and what she believed. She recommended that other Americans also do some excavating, preferably before the 2020 election, so they won’t react to their personal feelings of loss by blaming one another.

"I hate having the conversation about 'how do we bridge the divide?' in America," Lenz says. "Because right now, all we are doing is putting a band-aid on this large, gaping wound. What we need to do as a country is to sit for a moment and really look at it. America is not going to get better unless we stop being so comfortable. And that’s all people, liberals as well as Republicans. We need to contemplate what actually made that wound, this divide, in the first place."