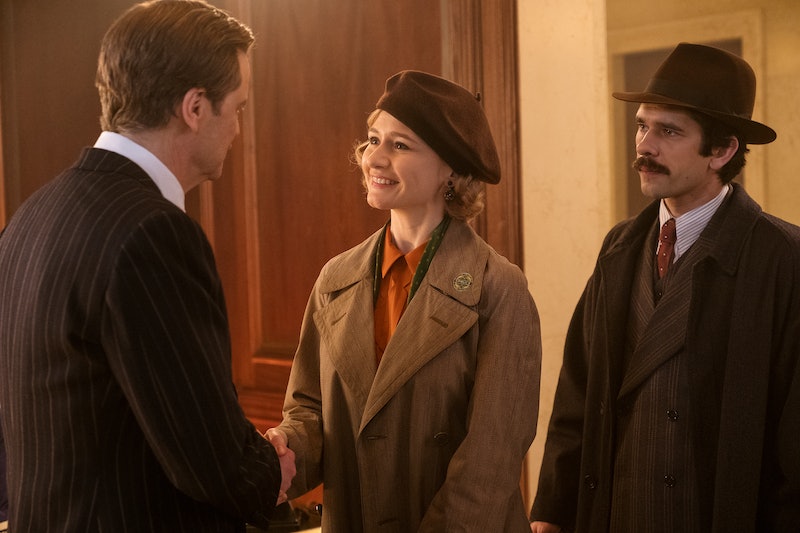 The original Banks parents aren't in Mary Poppins Returns, but the sequel to the 1964 film includes nods to George and Winnifred, particularly in the kind of grown-ups that their children have become. Michael (Ben Whishaw) tragically works at the same bank that oppressed his father. Meanwhile, Jane's feminism in Mary Poppins Returns is a touching nod to her pioneering mother and the "Sister Suffragette" scene from the original film.

Emily Mortimer's character's costumes, in particular, are a vintage "Pantsuit Nation" dream. Visiting the set of Mary Poppins Returns in April 2017, I and other reporters got a first look at various costumes, and Jane Banks' kicky ensembles certainly stood out.

"As the daughter of a suffragette, I decided to make her definitely a sort of independent modern woman — hence the trousers," says costume designer Sandy Powell as she shows us the green look that Jane is wearing when Mary flies back into her life. "She has three different outfits throughout the film and they all involve trousers," Powell continues.

Not much else is known about what the eldest Banks sibling has grown up to be like, but these fashion choices make a pretty strong statement. "I wanted her to look down to earth, and practical yet stylish," Powell adds. "My references for her were Katharine Hepburn, [Greta] Garbo and [Marlene] Dietrich, in pantsuits of the period."

It may not seem revolutionary to see a female character wearing pants, but this was not yet the fashion norm in the early days of the Great Depression (called the Great Slump in England). Hepburn, Dietrich, and Garbo were indeed fashion pioneers in that way. Mary Poppins Returns is set in 1934, and it was only a year prior that First Lady Eleanor Roosevelt shocked the public by wearing riding pants at the annual Easter Egg roll.

"1934 is a period for women which is not a million miles away" from the first Mary Poppins set in the Edwardian period, Powell tells us, "because it’s a longer hemline. Much longer than a few years later in the 1930s, toward the war, when hemlines rose up toward the knee."

It's nice to know that Winifred Banks (Glynis Johns) successfully raised a progressive daughter. In the original film, "Sister Suffragette" may not be the flashiest number, but it's an iconic moment. Mrs. Banks was not a working mother, but filled her days with activism, and sings about how "our daughters' daughters will applaud us" when she and her compatriots achieve rights for women.

And who among us hasn't used this gif in the last... two or so years?

The scene could be interpreted as a joke, that Mrs. Banks' forward-thinking made her an inattentive mother to her daughter and son in the present. So the fact that, as an adult, Jane is pushing gender norms in her own way cleverly affirms that Mrs. Banks' suffragettism wasn't useless, or a silly hobby.

Will Jane also be fighting against discrimination in the sequel? Will Mary Poppins Returns be political? It's difficult to look at any entertainment without that lens these days. However, it seems that overall Mary Poppins Returns is aiming for a relieving escapism — the kind of entertainment that saw the film industry boom in the 1930s, actually, because people would go to the cinema to put down their troubles for an hour or two.

"We’re living in a time of some unsettledness in the world and change and evolution," producer Marc Platt tells reporters on set, "and the kind of entertainment that people yearn for is a character’s story like Mary Poppins, where we can kind of forget our lives for a while and bring some magic, and charm, and music, and love, and innocence, and childhood back into our lives."

That said, this Poppins is refreshingly progressive nonetheless. Jane isn't the only character minimizing the gender binary when it comes to fashion. In the throwback vaudevillian number (pictured above) "A Cover Is Not The Book," Mary Poppins herself has a tuxedo jacket and a flapper bob haircut, which is revolutionary in its own right. "I looked at lots of musical performers," Powell says, "particularly women who dressed as men. There were loads of them, lots of them, it was a popular thing to do."

As for Mrs. Banks, fashion isn't the only nod to the matriarch in Mary Poppins Returns. The kite from the end of the original film (that uses Winifred's suffragette sash as a tail) also pops up, as we all saw in the trailer. It will be fun to see the other ways that Jane and her brother have learned from their iconic mother when the film hits theaters on Dec. 19.

More like this
20 Photos Of The 'Hocus Pocus' Cast Then & Now
By Radhika Menon
12 ’90s Movie References You Missed In 'Do Revenge'
By Radhika Menon
Margot Robbie Breaks Her Silence On *That* Viral 'Barbie' Moment
By Maxine Harrison
24 Years Ago, 'Friends' Dropped Its Most Underrated Ross & Rachel Episode
By Grace Wehniainen
Get Even More From Bustle — Sign Up For The Newsletter