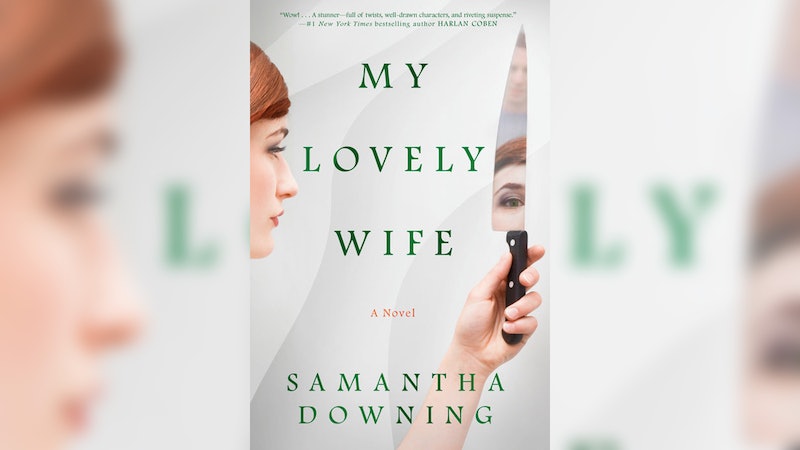 Every married couple has their own unique way of keeping the magic alive. For some, it's a weekly date night or an annual romantic getaway without the kids. For others, it's acting out sexual fantasies or experimenting in bed. For the couple at the center of Samantha Downing's sinister debut My Lovely Wife, the secret to a happy marriage is murder.

From the outside, Millicent and her husband appear to have the perfect life: a beautiful home in a wealthy Florida suburb, two happy and healthy children, successful careers as a top real estate agent and a tennis pro at the country club, respectively, and a solid marriage that started as truly epic airport meet-cute. But, like all couples, Millicent and her husband have their problems. They aren't nearly as wealthy as the people around them, a fact they are reminded of every time they meet with clients, go out to dinner with friends, or attend a gala at the club. In their constant attempt to keep up with the Joneses, their lives have become overworked, over-scheduled, and overtly dull. Until they discovered the perfect way to spice things up: murder.

"It didn't start as something bad. I still believe that," My Lovely Wife's unnamed narrator says about his and his wife Millicent's newfound hobby of stalking, abducting, and murdering local area women together. With the help of first-person, present-tense narration, readers get to see firsthand the couple's twisted journey from soccer parents to serial killers and come to learn exactly how Millicent's husband could think such a thing in earnest, and how he could justify his and his wife's violent acts.

Growing up in a wealthy, upper class Florida community he really never fit into — or could ever really afford — the narrator has spent most of his life yearning for more. He was never as rich as his friends, never as successful as his neighbors, and never as satisfied as he thought he deserved to be. "The world is filled with things I can't do and can't afford, from houses to cares to kitchen equipment, but this, this, is how we can be free,” he says of the murders. “This is the one thing that is ours, that we control."

For a while, that seems to be true. His wife Millicent seems truly happy, the magic is back in their relationship, and no one — not their friends, not their neighbors, and not even their own children — suspects a thing. But then the body of one of the couple's victims, Lindsay, is found at an abandoned motel, where police say she was apparently held captive for months before being strangled to death. The news shocks Millicent's husband, who believed that after they abducted her together, his wife had immediately killed Lindsay and disposed of her body in a swamp. Instead of following their original plan, though, Millicent had another idea: to model the couple's crimes after those committed by notorious local serial killer Owen Oliver Riley, who years earlier narrowly escaped conviction for a string of brutal murders. It is Millicent's gift to her husband, a way for them to keep on killing without ever being detected.

"This is what living with Millicent has always been like. Life goes along like it's supposed to, an occasional bump in the toad but otherwise a fairly smooth ride," the narrator says. "And then suddenly the ground opens into a chasm wide enough to swallow everything. Sometimes, what's inside is good, even great; sometimes not."

Initially smitten with his wife's plan, Millicent's husband eagerly joins in the effort of bringing the local legend back to life. Caught up in the possibility of extending their killing spree indefinitely, he becomes blind to the consequences of his actions, consequences that extend far beyond the lives murdered women themselves, into his own community, and onto his own doorstep.

A mesmerizing journey through darkest corners of the human psyche, My Lovely Wife plunges readers deep into the minds of some truly twisted characters. Walking in their shoes and forced to see the world through their eyes, you'll find everything you thought you knew — about the difference between right and wrong, truth and lies, even love and hate — called into question. Sharply written, cleverly paced, and wickedly entertaining, My Lovely Wife is an outstanding debut by a writer I can't wait to read more from.

More like this
The BBC Is Adapting A Best-Selling Novel About A Mistaken Killer
By Darshita Goyal
Nicola Coughlan Shared A Lady Whistledown Excerpt From ‘Bridgerton’ Season 3
By Grace Wehniainen, Alyssa Lapid and Sam Ramsden
10 Must-Read New Books Out This Week
By K.W. Colyard
Read The First Pages Of Emma Rosenblum’s Highly Anticipated Debut, 'Bad Summer People'
By Samantha Leach
Get Even More From Bustle — Sign Up For The Newsletter