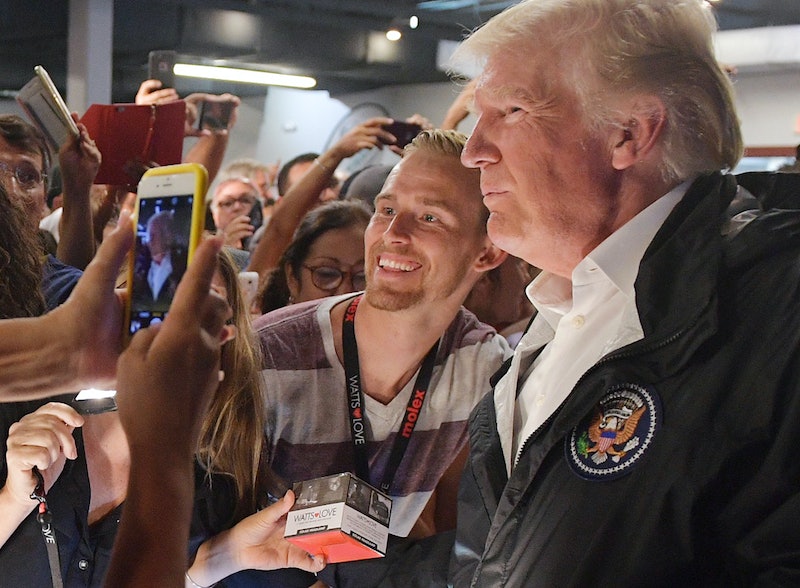 President Trump started his tour of Puerto Rico in an upperclass suburb of San Juan on Tuesday. According to a Washington Post review of his day in Puerto Rico, Trump didn't visit the parts of the island where people were most in need, but he did tour a gated community and visit a Christian church that was delivering aid to the needy. It was here, when Trump showed he doesn't understand what humanitarian aid is.

For starters, his excitement about throwing paper towel rolls into the crowd at Calvary Chapel in San Juan was widely panned. "There's a lot of love in this room, a lot of love," Trump said at one point after he threw the rolls. The crowd there appeared to like it, though others quickly criticized it. And there were other exchanges that are even more surprising.

The most telling is perhaps the one on clean water. Potable drinking water is one of the most elements things creating and maintaining a healthy society; this is why internationally federal agencies like USAID focuses so heavily on developing sources of clean and accessible drinking water. If it becomes contaminated, lives are at risk. That's what happened in Haiti after the earthquake in 2010; cholera quickly spread through untreated drinking water. But that importance appeared to be lost on the president, based on an exchange he had with a church member.

At the church, a member of the congregation explained the water purification kits to the president, according to the Post's account. "Wait," Trump said, "you put it in dirty water?" The congregant assured the president that any water would be fine to drink after 12 to 16 hours after adding the purification chemicals.

"Would you do it? Would you drink it?" he then asked, clearly not buying it. The church member assured him again that she would. "Really?" he asked with a reportedly "disgusted" expression on his face. "Really" came the response.

It was here that Trump turned to an explanation perhaps more familiar to him, asking, "Is this your company or something?" Of course the church member explained that she wasn't. Then he handed them out.

Given the United States' role in providing humanitarian aid and funding for relief programs throughout the world, this is troubling. Of course, Puerto Rico is part of the United States, and the fact that any of this is needed at all is troublesome. But Trump is the one who ultimately decides whether we help out poor countries in the Americas, Africa, and Asia where some 2.1 billion people live without access to clean drinking water in their home.

Furthermore, Trump's budget, introduced in May, included $13.5 billion in cuts to humanitarian aid around the world. Trump's interaction with the water purification system shows that the president doesn't fully grasp the types of programs that this money would go to. He's pushing for increased military spending in Africa, yet also calls billions in aid cuts. Some of the cuts have already happened — the administration already stopped contributing to the U.N. population fund because of possible abortion referrals.

And for someone who treats government like a business, Trump needs to see the return on investment. Maybe the introduction to clean water kits is the first step. Even canned food seemed like a surprise to him on Tuesday. "Whoa! I've never seen that before," Trump said after seeing a can of chicken, the Post reported.

All of this was not lost on some in Puerto Rico. San Juan Mayor Carmen Yulín Cruz called his visit all for PR purposes, telling MSNBC:

This terrible and abominable view of him throwing paper towels and throwing provisions at people, it's really — it does not embody the spirit of the American nation, you know. That is not the land of the free and the home of the brave that the beacon of democracy that people have learned to look up to, you know.