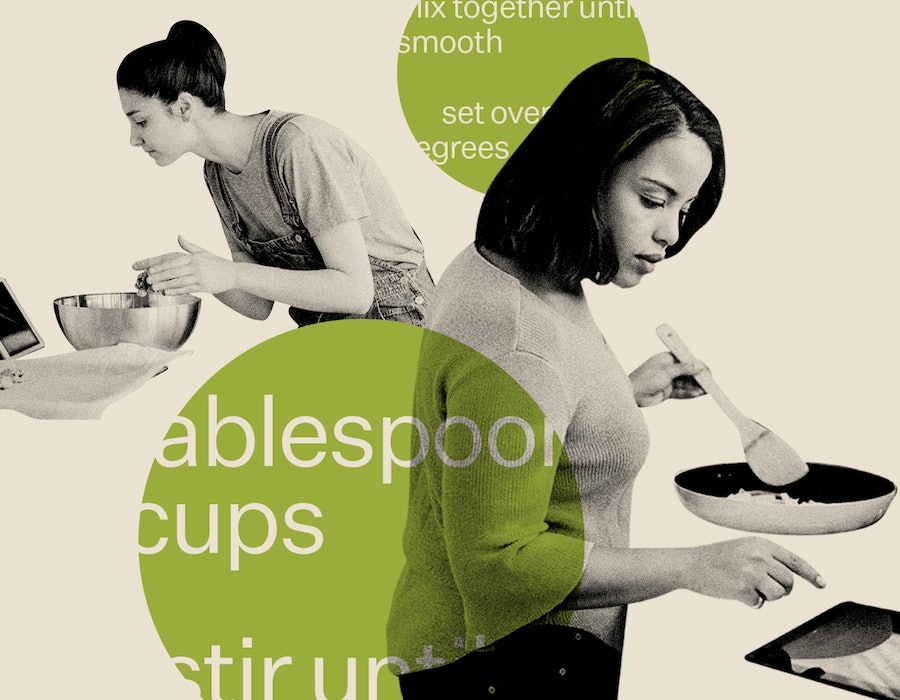 On March 19, as the coronavirus pandemic began shutting down parts of the country, Mallory Brooks, co-editor of lifestyle newsletter Garden Variety, sent out a 13-person-strong group text. “I’d love to see what everyone’s cooking/eating in these strange times!” the 30-year-old based in Greenville, South Carolina wrote. The resulting GroupMe, “What’s for Dinner?” has since grown to 17 participants. They share menu suggestions, original recipes, creative ways to use leftovers, and fails, like a strawberry pie that fell out of the freezer onto the floor. Brooks’ sister even created a Pinterest board to archive recipes that otherwise would get buried under the rapid clip of conversation.

New York-based cookbook author Emily Stephenson, 33, also wanted dinner inspiration in quarantine, but couldn’t keep up with social media. “It felt like all the food writers I follow were putting out so much (helpful!) content, but it was an overwhelming amount, scattered all over, that was probably all going to disappear after 24 hours on [Instagram] stories.” Her solution was an online zine, the untitled pantry project, featuring recipes from different contributors (including myself).

More and more of these quarantine projects are cropping up amid COVID-19, drawing comparisons to old-school community cookbooks — recipe compilations from groups of home cooks — that have been popular since the 19th century, explains Celia Sack, owner of the San Francisco-based cookbook store Omnivore Books. The “cookbooks” emerging now, however — published by friends, social media groups dedicated to cooking, or by brands and industry organizations that promote the work of line cooks — have the advantage of coming together quickly online, therefore bypassing the lengthy and selective process of traditional book publishing. They also immediately capture the sentiments of these unprecedented times, serving as time capsules of this singular moment in our lives.

Historically, recipe collections in community cookbooks were put together by one editor who’d seek out recipes from other members, with proceeds benefiting schools, religious institutions, temperance societies, orphanages, and so on. (They’re also almost “100% made by women,” Sack adds.) Over the years, these cookbooks popped up during times of crisis, like an AIDS crisis-era volume from an LGBT synagogue Sack recently sold. During World War I & II, books made by the wives of airmen stationed in Germany showed photos of bombed-out sites between recipes for cooking unusual cuts of meat and guides to substitutions. These books “were benefiting the war effort, but also all about what to do with rationed goods and to help you use things you weren’t used to cooking with.” Sounds a little bit like a 2020 kitchen.

They are real recipes shared by everyday people who understand the power of food on an intimate level.

Many of the cookbooks being published right now have a fundraising component or speak to the mental health benefits of cooking during stressful periods. How to Take Care, edited by interdisciplinary artist and chef Krystal Mack, includes wellness practices in addition to recipes. The ebook was available for download in exchange for a donation of $5 or more to an organization supporting victims of domestic violence and raised more than $7,000 in a month.

Mack, 34, cited the rich history of community cookbooks in the Black community as an inspiration for her project. “While [these cookbooks] often do have the end goal of raising money, they are real recipes shared by everyday people who understand the power of food on an intimate level,” she says. Mack, who is based in Baltimore, collected submissions that include activities like reading poetry and making fruit salad as part of the ebook to help people cope with the stress of the pandemic.

Cookware brand Great Jones planned to release a cookbook eventually, but decided to accelerate its timeline when the pandemic hit. Sales from the digital cookbook, Family Table, benefited No Kid Hungry, a charity co-founder Sierra Tishgart says the company selected in response to the rise in childhood hunger the pandemic caused. The book was released as a Mother’s Day gift, a tribute to the role women play in feeding their families.

Rachel Scola decided to organize a community cookbook in Who?s Cooking, a Facebook group for fans of the podcast Who Weekly?, after reading about them in the New York Times. Furloughed from her job in entertainment, she wanted to re-learn some graphic design as a quarantine project. The 25 submissions she included were mostly comfort foods, like hashbrown casserole or vegan mac and cheese, and members shared the recipe’s backstory along with their Instagram handles. Scola, 25, sampled some of the recipes while assembling the book and said the dishes were delicious and reflected the ways cooking has changed “during quar.”

“I've postponed my meal subscription boxes because they weren't economical when I was waiting for unemployment to kick in,” she says. “I’m doing a lot of budget cooking and 'throw what's in the pantry' cooking, dropping off any extra baked goods to friends in the neighborhood.”

Especially during quarantine, such community efforts offer meaningful support and connection. Brooks took a weeklong break from her GroupMe while dealing with anxiety that affected her interest in food and cooking. She was comforted by reading the day’s posts, even while eating simple foods like cinnamon toast, and returned when her mental health improved. For Scola, the group accountability was a motivator when her days lacked structure. “Part of me wanted to see myself accomplish this, especially since my day job was paused due to the pandemic and I haven't had a lot of projects to fill my time,” she says.

“I wanted my friends and colleagues to share what helps them feel grounded right now,” adds Mack. “For some folks that looks like a breathing exercise, and for others that is baking a loaf of sourdough.”

More like this
An Expert Weighs In On The Viral Raw Carrot Salad Trend
By Alexis Morillo
Do Green Powders Work As Well As TikTok Says They Do?
By Carolyn Steber
Learning To Love, Not Judge, The Lunchbox Wives Of TikTok
By Esther Zuckerman
I Tried Apothékary’s Wine Replacement Tincture & My Mind Is Blown
By Carolyn Steber
Get Even More From Bustle — Sign Up For The Newsletter
From hair trends to relationship advice, our daily newsletter has everything you need to sound like a person who’s on TikTok, even if you aren’t.