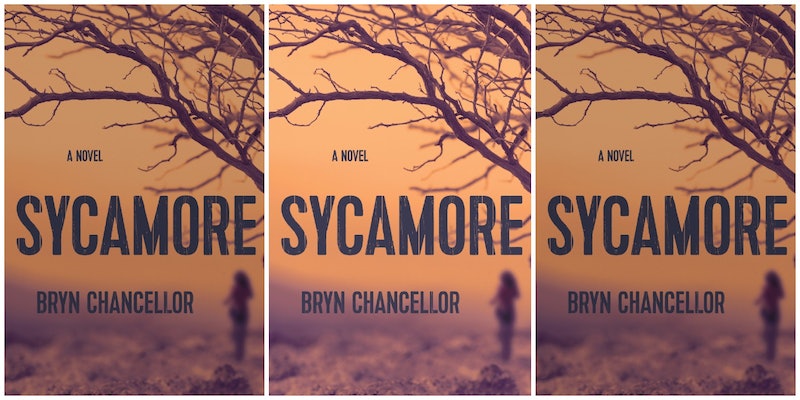 Bryn Chancellor’s debut novel, Sycamore, published by HarperCollins on May 9, does not have the word ‘girl’ in the title, but it is a novel peopled with girls — in particular a missing girl, Jess Winters, whose disappearance from the small, Arizona town of Sycamore 18 years earlier lingers in the hearts and minds of Sycamore residents and altered the lives of those who knew her intimately. Nobody knows what happened to Jess — not her mother, Maud, who still works as a mail carrier in Sycamore. Not her former-best friend Dani, nor Dani’s father Adam, whose complicated relationship with Jess many blame for the high school senior's disappearance. One night she was simply gone, her body never found.

But then a body is found nearly two decades later, the human remains buried into the wall of a dry desert ravine. In the days between the discovery and the identification of the body, the painful history of Jess’s brief time in Sycamore once again begins to swirl through the community.

I asked author Bryn Chancellor about Sycamore, and this trope of the missing girl in fiction, when she talked to Bustle via e-mail last week.

“If I put on my English professor hat, I’d say the fascination could be tied to how girls, especially adolescent girls, are monitored in public and private — the control of bodies and behavior in the guise of protection, a guise complicated by the intersections of race, class, sexuality, and ability,” the debut novelist tells Bustle. “When a girl goes missing, she is out of control, out of sight, which creates anxiety. The etymology of the word ‘girl’ itself is fascinating, a burdened history of usage that connotes both subservience and power.”

There are particular characteristics shared by many of fiction’s missing girls: they’re often girls — or women — who are acted upon, rather than agents of action themselves. They’ve succumbed to perils reserved for girlfriends, wives, and mothers. Their desire to live, should they maintain one, is demure, half-hearted, an after-thought occurring only after the villain has fully revealed himself, rather than a fierce, red-blooded hunger. The damsel in distress is alive and well (or, rather, not either) in fiction. But not so in Sycamore.

“In my own process, I never thought about Jess as a missing girl; if I had, I think I would have been in trouble, relying on a trope rather than a fully formed character,” Chancellor says. “I never thought I was writing a mystery, or suspense, or a thriller. I only thought I was writing a story about the lives of people in a small town in northern Arizona. Jess was only ever Jess to me, not a girl (though I introduce her as “girl” in the opening chapter, playing with the expectations of that word), a real person with desires, hopes, longings, and fears that I had to discover and explore. What most interested me about her disappearance, especially after so many years, was those left behind. They are trapped in an unresolved space, where someone is neither alive nor dead. What does it mean to continue to hope? Or to let go? Is it better to remember or to forget, or can you sustain both? How do you move forward without answers?”

Jess might be a missing girl, but she is not a damsel in distress. As the novel pans from present to past, readers come to know Jess as a girl on the move, filled with the possibility of her young life. A relative newcomer to Sycamore herself, she walks the streets of her small town at night, she writes poetry, she brushes off the isolation and bullying that can face a new student in a small town, she throws herself into love and lust with abandon (both with a boy her own age and the middle-aged father of her best friend), she seems to sense all that life has in store for her if only she can land on the other side of high school.

“I think the largeness of Jess’s disappearance is connected to the dynamics of a small town, where most people at least know of her," she says. "I’m from a small town, and while the book isn’t at all based on a true story, I can recall with absolute clarity the accidents and deaths of young people I grew up with, even if I didn’t know them personally. I’m interested in how identity and memory can become communal, how a strange sense of ownership over other people’s experiences can emerge in close-knit spaces. What does it mean to know someone? What if your sense of self conflicts with others’ knowledge or expectations of who you are?”

At the outset, Chancellor says she didn’t know Sycamore was a novel — though some of the book’s characters had already assembled themselves in her mind. “I always feel as though I’m following them — stalking, more like,” Chancellor says of her characters, who each take turns telling the story of Sycamore and Jess’s disappearance through their different, alternating perspectives. “But I didn’t know I was writing a novel. I kept asking, Can I have this many voices? Can I do this?”

Exploring those questions, especially as a debut novelist, is a unique experience. But it’s one that Chancellor seems to be taking on with good humor.

“I’ve heard other writers talk about the process of writing a book vs. publishing one as Writer vs. Author. Same body of water, different boats,” Chancellor says. “My Writer boat is a sturdy little dinghy, with duct tape over holes and scrapes where I’ve rammed into lurking objects. My initials are scrawled in Sharpie on the side. It seats one, and I row it until my arms are rubbery, my skin sunburned. I get tossed around in storms, tipped over, but I always know how to get to shore, even if I have to climb out and swim, dragging the boat behind me. My Author boat, well, actually it’s not my boat all. I’m along for the ride, and so much of it is lovely — my book’s name in stylish script on the stern, the talented, supportive crew, the spray of saltwater in my face as this sleek boat jumps the waves. But it’s also a bit disorienting, the sun sometimes too bright as it glints off the decking, as I lose sight of the shore. I don’t have my sea legs, and I clutch the grab-rails so I don’t pitch starboard. (I also had to look up a bunch of nautical terms to write that.)”

Chancellor’s says she didn’t begin writing Sycamore with Jess’s fate predetermined. And though readers will ultimately discover the teen’s fate, for the characters of Sycamore, the mystery lingers. “When I started pulling these stories together as a novel, I had no idea what had happened to Jess,” Chancellor says. “I didn’t know if she was living or dead, or how she was connected to all these people. I knew nothing. Which actually is my favorite place as a writer. Facing the unknown, puzzling out the who and what and why. I just tried to feel my way through, unlock the answers as I learned more about the characters and place.”

One theme that pervades Jess’s history with the town of Sycamore is betrayal — the ways Jess and her best friend’s father, Adam, betray their friends and family, and also the ways Jess and Adam are betrayed by themselves, by their own bodies. Their bodies pull them in one direction while their minds pull towards another.

“Adolescence and middle age are both times of huge changes in the body. Both are “cusp” states, one entering adulthood and the other entering, what? A less defined transition. Old age, I suppose, one step closer to death,” says Chancellor. “I feel more in tune with Adam on this one, being smack in middle-age myself. For Jess, her changes, while disconcerting, also are full of promise. She can’t wait to get older, to see who’ll she’ll be. I think she’s more accustomed to examining her heightened emotions. Adam, on the other hand, is in a kind of fugue state. He’s staring down his mortality. He’s not wondering who he’s going to be; he’s wondering who he once was, who he is now, and for how much longer. No wonder he can’t see what he’s doing.”

I ask if Chancellor blames Adam for Jess’s disappearance, as so many of the characters in Sycamore do.

“Fault or blame interests me only in how the people Jess left behind fault themselves, and how that shapes how they live. More compelling to me is the uncertainty and fragility and loss that govern all of us," Chancellor says. "Lives are upended, unexpectedly, at every turn. Death, illness, disappearance, divorce and breakups, jobs, imprisonment, war, fires, tornadoes, floods. My own father died suddenly when I was 24. Boom, gone, after three days of illness. That has shaped my outlook — and my writing — more than anything in my life since. Writing Maud’s experience of missing Jess in some ways was me grappling with my own two-decades-long grief of a missing person: my dead father, who I know, rationally, will never return. I know it, and know it, and know it. And yet: there he is, in memory, in photographs, in my own face. What do you do with such losses? Do you ever let go? How? I don’t know, probably won’t ever know."

"Writing isn’t about the answers," she says. "But exploring the questions.”