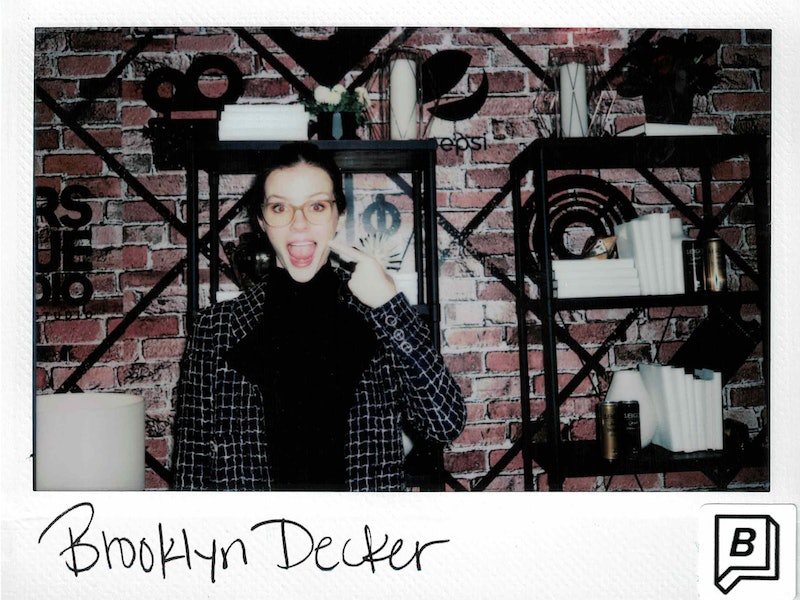 When Bustle editors go on the road, whether it's for a film festival, a comic book convention, or a set visit, we want to give the celebs we meet along the way the chance to leave their mark. Literally. So we have them pose for polaroid that captures their latest adventure, hand them a pen, a piece of paper, a few questions, and ask them to get creative. The rest is up to them. This time, we caught up with one of the stars of Band Aid, Brooklyn Decker, at the 2017 Sundance Film Festival in Park City, Utah for the Bustle Booth On Location.

Model-turned-actor Brooklyn Decker is perhaps most known for breakout roles in big budget movies like Just Go With It and Battleship, but the actor also has some more subtle roles under her belt, including a turn on Netflix's Grace & Frankie. Now, she's bringing her real life role as a mother to the big screen in Zoe Lister-Jones' Band Aid, about a couple who learns to write songs in order to work through fights. Decker plays one of the couple's friends and a mom with a major career in the film, which was brought to life by an all-woman crew.

During the hustle and bustle of the film festival, however, Decker took a moment to tell us a little about herself, too.