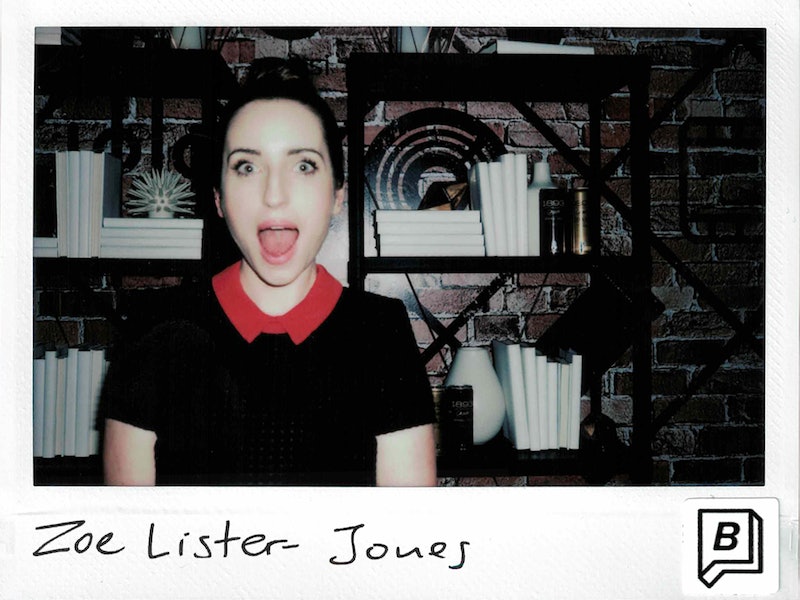 When Bustle editors go on the road, whether it's for a film festival, a comic book convention, or a set visit, we want to give the celebs we meet along the way the chance to leave their mark. Literally. So we have them pose for polaroid that captures their latest adventure, hand them a pen, a piece of paper, a few questions, and ask them to get creative. The rest is up to them. This time, we caught up with the writer, director, and star of Band Aid, Zoe Lister-Jones at the 2017 Sundance Film Festival in Park City, Utah for the Bustle Booth On Location.

Lister-Jones made a name for herself on TV sitcoms like Whitney Cummings' Whitney, CBS' Friends With Better Lives, and — my personal favorite — an arc as Schmidt's politician love interest, Fawn Moscato, on New Girl, but the Brooklyn-born daughter of two artists has also been working the behind-the scenes, writing and producing films like Lola Versus and Breaking Upward. At the 2017 Sundance film festival, Lister-Jones debuted Band Aid, a film she stars in, wrote, and directed. Plus, thanks to her, the film boasts an unheard of all-female film crew, from the production assistants to the grips all the way up to her role as director.

Clearly, we have to get to know this badass lady a little better.