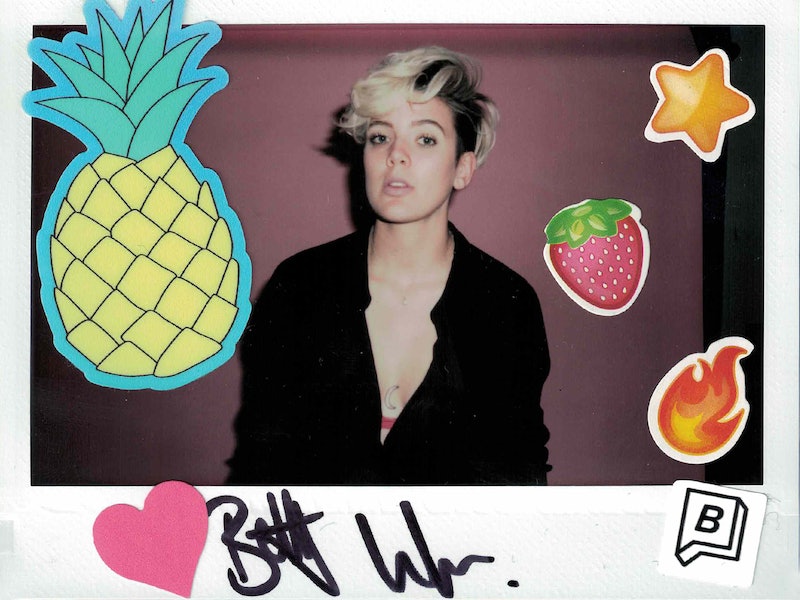 When celebrities come into Bustle HQ in New York, whether it's for a photoshoot, videoshoot, or a Facebook Live, we want to give them the chance to leave their mark. Literally. So we hand them a pen, a piece of paper, a few questions, and ask them to get creative. The rest is up to them. This time, singer Betty Who is leaving her mark in the Bustle Booth.

Betty Who is not Betty Who's real name. Her given moniker is Jessica Newham, but she decided early on in her career to go with a stage name. "I really wanted to preserve a part of me, because you are your brand when you’re an artist," she tells me in an interview promoting her new album, The Valley. She explains that she got the name from a song she wrote when she was a teenager that she named Betty Who because "f*ck knows why."

That's a perfect encapsulation of who she is: Equal parts honest, bold, personable, vulnerable, excited, and more, which is why a stage name is so necessary. "Sometimes I'm a little bit more animated or a little less vulnerable or whatever it is in my artistry, so I wanted a line to be drawn and the name helps," she says.

The singer isn't afraid to peel back layers of herself in her songs, and the same is true of the Bustle Booth, where she shares her sweet superpower, what scares her, and her hope to be remembered for making people laugh. She did just that in our interview, and her Booth is sure to make you do the same.