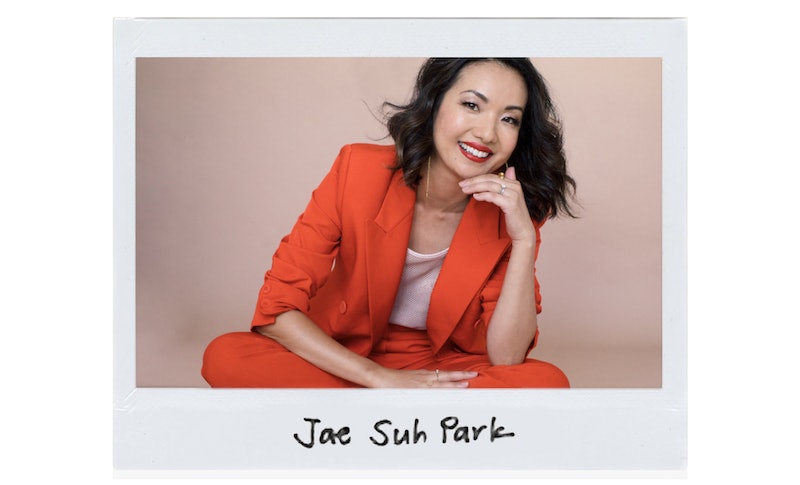 When celebrities hang out with Bustle writers, we want to give them the chance to leave their mark. Literally. So we hand them a pen, a piece of paper, a few questions, and ask them to get creative. The rest is up to them. This time, Friends From College star Jae Suh Park is leaving her mark in the Bustle Booth.

Jae Suh Park wasn't auditioning for any roles that shot outside of California. She had just had her child, and her husband, also an actor, was shooting a show in Los Angeles. She had nearly forgotten about an audition she had done months before when she got a call from her lawyer saying he was busy drawing up her contracts. "I was like 'what contract?' I didn't even know what show he was talking about!" Park tells Bustle over the phone one December afternoon. The show was Friends From College and the rest was history.

Friends From College follows six Harvard alum as they navigate life in their late 30s/early 40s. It isn't your typical college buddy comedy, although it can be decidedly hilarious. It veers a little dark, but confronts the complexities and muddiness of modern relationships post-college, both romantic and platonic. Park's character, Marianne, is the hippie of the bunch, spending her time as a yoga instructor and animal lover. Yet, despite most ~earthy~ characters who are often portrayed as head-in-the-clouds do-nothings (hello Phoebe Buffay!), Marianne is often the most grounded and sensible character of the bunch. She provides much of the (sorely-needed) moral compass this season... while also getting herself into her fair share of bizarre situations (because, well, just because she's the most grounded of the friends doesn't mean she isn't a little bit wacky). As Park puts it, "It's me in a kind of heightened, fun world. There are parts of me in there. Probably the naughtiest parts."

The atmosphere Park describes is palpable throughout the first season. The whole world does feel heightened; the consequences of their actions are much more dire. They're playing with each other's hearts. No one is pure; no one is right. The series asks you not to singularly identify with only one of the six friends. As Park says, "I understand everyone. Their plight, what brought them there. I relate to the complexity of everyone."

Park says her character will break out from the stable-ish role a little bit this season, promising Marianne will get into a bit more trouble. Park also promises that this season will leave on a bigger cliffhanger than the last. If Season 1 is anything to go by, we're in for a wild ride. Find out more about Park in her Bustle Booth below.

More like this
'Grey's Anatomy's New Intern Got Advice From Dr. Bailey Herself
By Grace Wehniainen
Lauren Lyle Is Keeping The Contents Of Karen Pirie’s Bum Bag A Mystery
By El Hunt
Netflix Reveals First Look At Wednesday In The 'Addams Family' Spinoff Series
By Bustle Editors
Bustle Daily Newsletter: October 4, 2022
By Hayley Schueneman
Get Even More From Bustle — Sign Up For The Newsletter