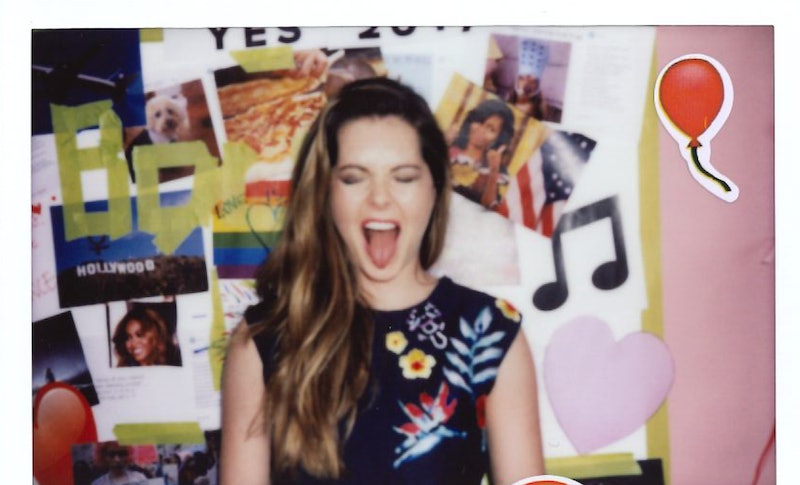 When celebrities come into Bustle HQ in New York, whether it's for a photoshoot, videoshoot, or a Facebook Live, we want to give them the chance to leave their mark. Literally. So we hand them a pen, a piece of paper, a few questions, and ask them to get creative. The rest is up to them. This time, The Bold Type actor Meghann Fahy is leaving her mark in the Bustle Booth.

Freeform's show The Bold Type follows three millennial women working at fictional women's magazine Scarlet. Now wrapping up Season 1, the series has turned positive reviews into a dedicated fan following. So, it's no surprise that Fahy and her co-stars are gaining more interest than ever, and the show is proving to be a breakout series for the lot of them.

Before The Bold Type, Fahy starred as Natalie in the Broadway production of Next To Normal. Viewers may also recognize Fahy from her role of Devyn on Gossip Girl and her stint as Hannah O'Connor on ABC's One Life To Live. Though Fahy is a Broadway star and TV veteran, The Bold Type has introduced Fahy to a new audience. And, now fans can get to know the real Fahy via her creative and hilarious answers in the Bustle Booth.

More like this
On 'The Handmaid’s Tale,' Christine Ko Fights Back
By Gretchen Smail
Ismael Cruz Córdova Loves His Elf Ears
By Morgan Leigh Davies
Devi Is Going To Meet A “Smoldering Bad Boy” In ‘Never Have I Ever’ Season 4
By Jack Irvin and Gabrielle Bondi
Netflix Reveals First Look At Wednesday In The 'Addams Family' Spinoff Series
By Bustle Editors
Get Even More From Bustle — Sign Up For The Newsletter