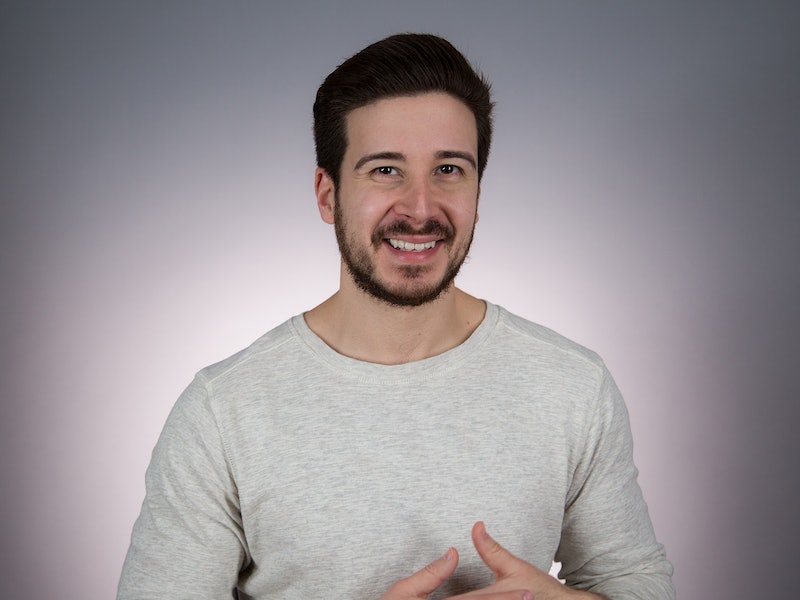 When celebrities come into Bustle HQ in New York, whether it's for a photoshoot, videoshoot, or a Facebook Live, we want to give them the chance to leave their mark. Literally. So we hand them a pen, a piece of paper, a few questions, and ask them to get creative. The rest is up to them. This time, Vinny & Ma Eat America star Vinny G is leaving his mark in the Bustle Booth.

America first fell in love with 29-year-old Vinny Guadagnino when he was between fist pumps as the fun-loving, no-drama member of the Jersey Shore crew. Since then, he's stayed busy while his warm personality continues to shine in all of his endeavors. For example, his endearing relationship with his very Italian "ma" finally got the spin-off fans were waiting for with Vinny & Ma Eat America, which premiered Jan. 31 on the Cooking Channel.

Although a complete sweetheart, Vinny G also had a knack for always being honest and authentic, which is why he became a fan favorite. He brings those elements to his Facebook "VinnyLive" videos and appearances on MTV's Joking Off. And, when visiting Bustle to moderate the classic New York verses New Jersey debate, Guadagnino took to the Bustle Booth to prove that his humor will never fail his fans.