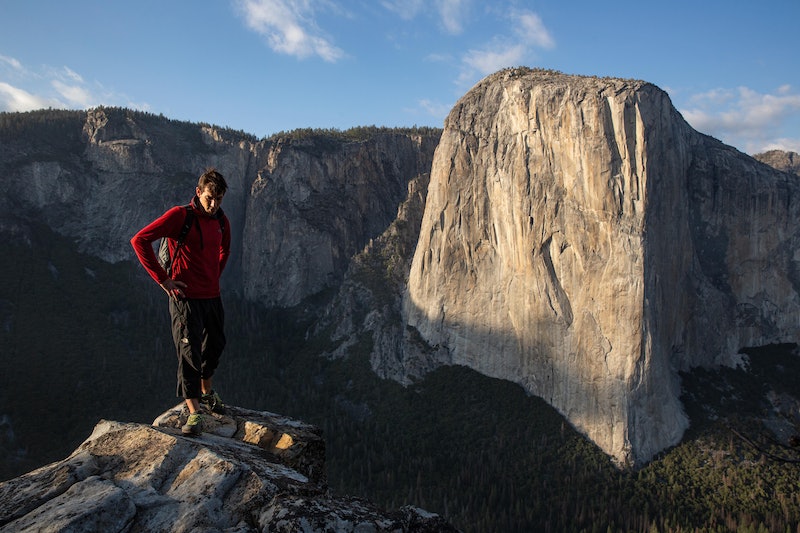 Free Solo, a documentary feature up for an Academy Award this Sunday, follows the world’s best climber, Alex Honnold, as he attempts the unthinkable by climbing a 3,000 foot vertical wall in Yosemite’s El Capitan. What gives the movie its name is that he performs this climb “free solo,” which means without a rope, safety gear, or a partner. It’s a sport where the only way to live is to achieve perfection; the other choice is death. Every single factor, from a loose rock, rough wind, to a startled bird, has the ability to send you crashing.

I’ve put myself through the breathless 97-minute documentary twice now. In heart-stopping moments, Alex, 33, rests his life on the grip of one thumb or toe; his gangly body dangles off ledges and exposed vertical rock faces, teasing fate with a carefully considered calculation of the consequences. "There's no margin for error. Imagine an Olympic-gold-medal-level athletic achievement that if you don't get that gold medal, you're going to die," Tommy Caldwell, one of Alex’s climbing partners, explains in the film.

Free Solo has caused quite a stir far beyond the climbing world, provoking conversations about the ethics of free soloing, Alex's wit, and directors Jimmy Chin and Elizabeth Chai Vasarhelyi's guts, filming something that could have turned out to be so horrendous. How does one come to grapple with the odds that their creative documentary project may kill their friend?

Alex is less perturbed by these questions. “Anybody could conceivably die on any given day,” he says in the doc. “Soloing just makes it feel much more immediate and present.” Never in the film is there a sense that he is reckless or attempting the feat for anybody other than himself. He’s practiced climbing the same wall without falling for eight or nine years, drawn out every foothold of the route in his climbing notebook, and philosophized about why he chooses to continue when free soloists have notoriously short lifespans. “Nothing good happens in the world by being happy and cozy,” is his reason.

But what boggles my mind most isn’t Alex’s epic three hours and 56 minute free solo up the Dawn Wall on the Freerider route, awe-inspiring as it is! It is not his chilling, calculated strokes up the Boulder problem where he is admittedly the closest to death, his incredible wingspan, or the sweeping views of rock and valley from his point of view.

It's Sanni McCandless, his girlfriend who he met by happenstance on a tour, who he can't see from above. Sanni's graceful maneuvering around Alex's brutally direct remarks — from commenting on how stupid she looks fixing up their house to the way he’ll always choose climbing over a partner — reveal a puzzling yet patient dedication to a partner who chooses to risk his life against her wishes.

When Alex fields questions at a talk at the beginning of the movie, his prowess in climbing has been established, yet a social and emotional gap in his life is also revealed. “My dating life, I think, has been an overall negative,” he admits. “I travel all the time, and I live in a car.”

We learn more throughout the movie: He’s not comfortable using the "l-word"; he had to teach himself how to hug when he was 23; he was sometimes called "demeaning things" as a child, according to his mother. And thus the climber is thrown, in his own words, into “the bottomless pit of self-loathing.”

So when Alex starts dating Sanni, as we may expect, it’s clumsy, fumbling and awkward to watch. At one point after moving into their new home in Las Vegas, Sanni even blurts out, “If you’re asking about my domestic bliss, it’s not existing.” But that’s the beauty of this movie. While we know that Alex completes the climb with a kind of perfection and planning that no Olympic gold medal could fairly validate, and that he is still alive at the end of it, we’re less sure of his performance in his personal life.

In a movie about an epic climb, this is the cliffhanger.

Their relationship starts off on a serious bump. When Sanni belays Alex, she forgets to look at the amount of rope left and he falls. He considers breaking up with her then, yet Sanni isn’t one to topple into the trap of guilt or insecurity just because Alex is pointing fingers. She dishes out her own wisdom and teaches him a lesson about sticking to something. “Your life isn't going to be any better if you break up with me,” she says, firm and confident.

The day before Alex attempts his free solo climb, he intends to keep the plan from Sanni, who pries lightheartedly until she finds out the truth. One of the most difficult and profound moments in the movie — for me and for many of the people I’ve talked to — is when Alex and Sanni debate whether he should consider her wishes or her feelings. “Meet me halfway,” she pleads with him, “and when you solo, to put me into the equation.”

In tears, she presses him on whether he feels any obligation to extend his lifespan for her sake, or the sake of the relationship. Alex says he understands her concern. Still, he responds coolly: “No.”

What gives the movie drama, substance and evolution is this back and forth, this weight of one person’s ambition against someone else’s love and pain. “I tell Alex he loves me all the time and he shows me he loves me all the time,” Sanni says in an interview in the movie. It’s a line that made audiences laugh both times I watched it — there’s sympathy for Sanni, but sympathy for Alex as well, who, as we see, is taking baby steps.

So Sanni leaves to give him space during his climb; she drives hours away to wait for his call. How does a lover’s heart stay placid in this impossible situation? Knowing that hug may be their last, but still having to accept that love means letting others be free?

Alex, calm and imperturbable to his friends, seems bumbling around his romantic interest, and she acts as emotional guide to a new dimension of growth that isn’t about ascending literal walls. Throughout the movie, from when they are learning how to make AeroPress coffee to picking out a fridge for their new home, Sanni seems to be the one to hold Alex’s hand and guide him with a kind of unstinting love and understanding that he never experienced as a child.

Her role ebbs and flows. Often, she's the attached, supportive girlfriend to one detached from his own dangerous endeavors, showing maturity and sensitivity of her partner’s needs. In a movie that is supposed to be about Alex, she more than holds her own — she is the most lively, dynamic character. She works as a life coach, hosting retreats to help clients tackle career changes and life transitions, I assume in the same candid yet gentle way she does with Alex.

Alex shares that his past girlfriends, unable to cope with his calculated logic, had accused him of being mean and crazy. I move all the time as well (I was in 21 countries last year), and like Alex, some of my family are detached from my risks in life (my parents have no idea where I am or what I do for a living), and yes, alas, I have been called demeaning things by them as well. As I see myself reflected in Alex's ambivalence towards love, his need to push himself, I also admire and respect how much Sanni has taught him.

When Sanni says to Alex, "Your life isn't going to be any better if you break up with me," I felt like I was sitting in a pew. Later I melted into tears when Alex calls Sanni after his climb, and says, “I love you and I appreciate you." His eyes are wet, though tears never fall.