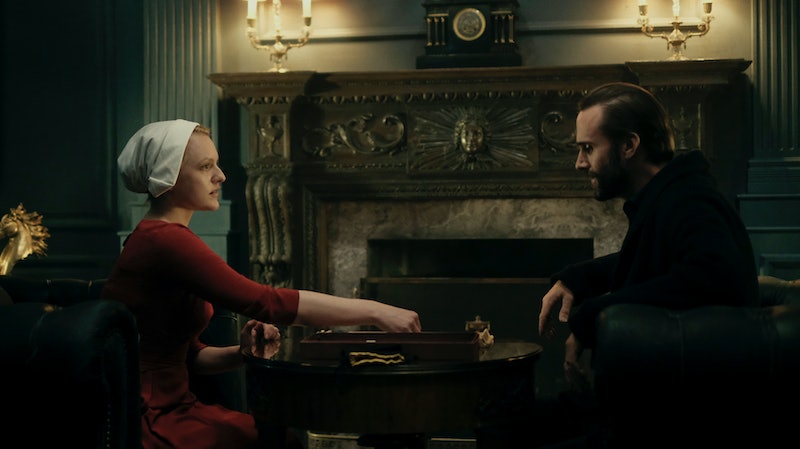 Yet upon closer inspection, this man reveals himself to be something other than he appears. At first, the signs are small — a passing reference to his love for Bill Maher here, a vaguely misogynistic tweet about Kellyanne Conway or Chelsea Clinton on his Twitter timeline there. He deems a major feminist thinker "overrated" or accuses a female colleague of being "overly emotional." Eventually, you realize that this man is not what he appears to be. He is a wolf in sheep's clothing, a garden-variety misogynist thinly disguised as a 21st-century progressive male. No amount of quoting Roxane Gay will ever change that, at best, he has no interest in understanding women, and at worst he deeply despises them.

Although perhaps not front and center to the narrative, this type of man plays a crucial role in The Handmaid's Tale, the adaptation of Margaret Atwood's dystopian classic that recently premiered on Hulu. There are two more qualities that define this type of man: he is well-meaning, and he is toxic.

Since it premiered on April 26, The Handmaid's Tale has been rightly lauded as a chilling premonition of an anti-feminist dystopia that is, in light of the Trump administration's efforts to roll back women's rights, not that far off from our own reality. Yet even though the Republic of Gilead is staggeringly misogynistic — women are defined solely by their reproductive capacity, and they cannot have jobs or own property — what's so interesting about the men in the world of The Handmaid's Tale is that they are, for the most part, not hostile to the women of Gilead, at least not openly so. In fact, they are often more outwardly sympathetic to the women of Gilead than the women are to each other. Yet underneath the surface of their sympathy lies a simmering cauldron of male privilege. The men are at best completely ignorant of women's oppression, and at worst deeply complicit in it.

In The Handmaid's Tale, the story is neatly split between two time periods: before Gilead, and after, through the eyes of the Handmaid Offred (Elisabeth Moss). Before she becomes a Handmaid, Offred is married to Luke (O.T. Fagblene). Luke is, in most respects, a good liberal dude. He wears beanies, he sports a trim beard, and he is, in theory, opposed to the Sons of Jacob, the fundamentalist group leading the Republic of Gilead. “We’ll figure it out. This can’t last," he reassures his wife, a statement eerily reminiscent of those who provided similar reassurances after the rash of anti-Muslim, anti-Semitic incidents following Trump's election.

Yet when Offred and her friend Moira (Samira Wiley) have been let go from their jobs due to a change in the law that forbids women from working, Luke is maddeningly blind to the significance of this, once again reassuring his wife, "You know I'll take care of you." Of course, Luke's ability to financially support his wife is beside the point. The point is that it's that sort of patronizing attitude that has led to the gradual erosion of women's rights to begin with, and Moira and Offred rightfully call him out for this.

Yet in that moment, Luke has shown his hand. Despite his best intentions to sympathize with his wife and friend, his male privilege renders him incapable of understanding the full weight of what is happening here. Where he sees right-wing hysteria that will soon blow over, Offred and Moira see a harbinger of worse things to come, and it's no wonder that their vision of the dystopian future is the one that actually comes true.

While the women of various castes in Gilead are hostile to each other, with Marthas pitted against Handmaids and Handmaids pitted against Wives. Yet the men we meet in Gilead at least appear to be sympathetic to Offred's plight. Nick (Max Minghella), the Commander's driver, appears to care for her, warning her to avoid any contact with fellow Handmaid Ofglen (Alexis Bledel), whom he (correctly) suspects is involved with the resistance. Yet three episodes into the series, it's also becoming clear that he nurses an attraction to Offred — and given that he's low-ranking and thus not provided access to a Handmaid (or to any sexual partners at all, for that matter), his kindness is clearly driven by something other than pure altruism.

In a world in which sex is intended purely for reproductive purposes and men of lower castes are afforded no access to women, the prospect of sex is a primary motivation for most men, not unlike today's world. In one episode, a doctor secretly offers to impregnate Offred so she won't be accused of failing in her duties as a Handmaid. "It'll only take a minute, honey," he says. His offer is framed out of concern for her welfare — if Offred can't get pregnant by the Commander, she will presumably be moved to another household, or worse. Yet it's tough to see his actions as magnanimous while his hand is sliding up her thigh. In Gilead, as in the real world, men's less-than-honorable intentions are cloaked in the guise of benevolence.

Perhaps the most prominent example of a generous man whose motives are suspect is the Commander (Joseph Fiennes), Offred's master. The Commander is genteel and kind to Offred, soliciting her affection with Scrabble games and glasses of Scotch. Yet despite his kindness, the Commander is still deeply and inextricably complicit in a system that oppresses women. While it's unclear at this point where he stands in the new regime's hierarchy, he's clearly high-ranking, and he appears to have no problem with using violence to get Offred to reveal information about the "gender traitor" Ofglen.

For the Commander, Gilead's horrific treatment of women is an inevitability, mere collateral damage in a system that is designed exclusively to benefit the only people that matter: wealthy white men like him.

The Commander represents the extreme end of the spectrum, a man who has no compunction about perpetuating patriarchal values at the expense of others. Yet the other men in the series, while ostensibly more aligned with the resistance, are still either wholly ignorant of women's struggles or directly profiting off them. In this sense, the men of Gilead aren't unlike the left-leaning men we've grown up with who see embracing feminism as part of playing the long game, who equate women's sexual liberation with being granted access to an all-you-can-eat sexual buffet. They are benefiting from the patriarchal system, even as they condemn it.

In Gilead, just as in contemporary society, the real villains aren't the ones we've come to expect: the hulking storm troopers who guide the borders or the puffy-haired, vituperative demagogue spouting racist and sexist invective on the campaign trail. The real villain is the Well-Meaning Man: the one who looks the other way in the face of oppression, convinced that it'll all blow over; the one who offers assistance while sliding a hand up a thigh; the one who has a vested interest in trying to make the world better, not caring that for some people, it makes the world worse. Gilead isn't just a stone's throw away from our own reality; we're already living in it. And if we want to find out who's responsible for this, we need look no further than our Tinder inboxes.

More like this
Neil Patrick Harris Will Play 'Doctor Who's “Greatest Enemy” Yet
By El Hunt
'The Undeclared War' Took Inspiration From This Gavin & Stacey Location
By Maxine Harrison
Adele’s All-Female Lineup Includes Kacey Musgraves, Mahalia, & Self Esteem
By Shahed Ezaydi
Here’s How Lizzo Is Supporting Abortion Rights After The Roe v. Wade Reversal
By Brad Witter
Get Even More From Bustle — Sign Up For The Newsletter