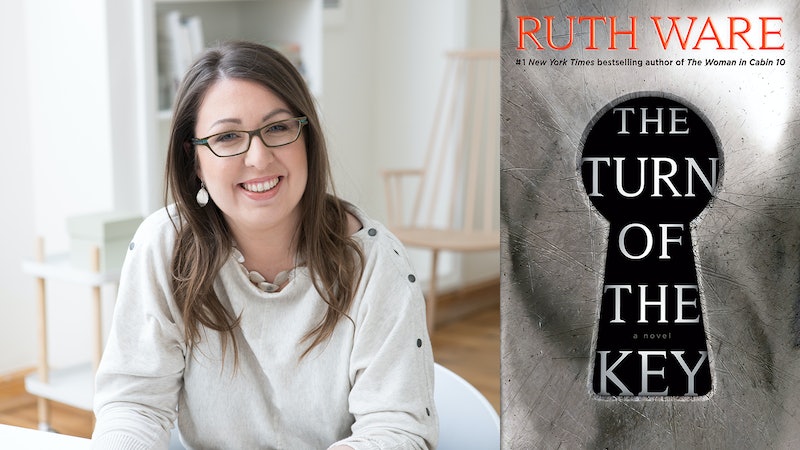 I first encountered author Ruth Ware in early 2017. As I browsed through thrillers, I kept circling back to The Woman in Cabin 10, a mystery described as being reminiscent of the work of Agatha Christie. I remember wanting something light and engaging, so I naively added it to my cart. The thing about Ware’s novels is that they’re not light. Entertaining? Yes. Light? Not so much. In Ware’s latest book, The Turn of the Key, she delivers a novel full of twisted tension that will have readers looking at technology a little bit differently.

The Turn of the Key opens with its ending. Rowan Caine is a young nanny currently awaiting trial for the death of a little girl. It’s a highly publicized murder that’s isolated her completely. Not yet convicted, she desperately writes a plea to the only lawyer she believes might represent her, Mr. Wrexham. Her letters to him are an attempt to prove her innocence.

Caine writes that she came across the live-in nanny job post by accident. The generous salary, fresh start, and an opportunity to be a part of a perfect family — one so unlike her own — made it an intriguing offer. When she arrived for an interview at Heatherbrae House — the family’s luxurious, secluded smart-home situated in the Scottish Highlands — she knew she would do just about anything to land the job.

In her letters, which start in September 2017, she recounts that it didn’t take long for the dreamy façade to crack. The smart technology malfunctioned almost immediately, causing alarms to blare randomly in the middle of the night. During that time, she would hear noises above her bedroom, but she couldn’t tell if they were a result of sleep deprivation or if someone was actually lurking in the closed-off attic above her. Messages like "We Hate You" appeared in the unlikeliest of places. Despite the house being able to do just about anything, it couldn’t help her explain these strange occurrences, nor could the home’s caretaker, a modern day Mrs. Danvers. Most distressing though were the children — not shy adolescents, but menacing ones harboring dangerous secrets about their parents and Heatherbrae House. By the time Rowan was ready to confront reality, it was too late. In her letters to Mr. Wrexham, Caine admits that she lied to obtain the post, but she insists that those lies don’t make her a murderer.

'The Turn Of The Key' by Ruth Ware

For voracious readers, the title may seem familiar. That’s because it’s a nod to Henry James’s The Turn of the Screw, a 1898 gothic novella about a young woman who embarks on her first job as a governess for two small, strange children at a large, ghostly estate. She soon discovers that something sinister is at play — something that will mentally torture her and lead to an eventual breaking point.

It sounds similar, but Ware’s book isn’t a modern day retelling of the classic ghost story. In fact, she tells Bustle, she never actually read the book until after she started writing The Turn of the Key. "It was only about halfway through that I suddenly realized that I was treading on a lot of the same themes because even though I hadn’t read The Turn of the Screw, it’s so embedded in culture that I knew what it was about," she says.

"I noticed quite a few articles in the press about the phenomenon of smart home and digital abuse. It seemed to be a growing problem that the law hadn’t quite caught up with."

After that realization, Ware knew she was going to have to read the book before she would be able to comfortably move forward. If she was going to write a similar story, she wanted to do it deliberately rather than accidentally. The result? "They do deal with some of the same preoccupations, some of the same anxieties we have as individuals and as a society as well," she says. One of those anxieties, she says, is the hair-raising, eerie feeling of being watched.

According to Ware, Heatherbrae House was always going to be a smart house. "I’m not too 'tin-foil hat' about technology," says Ware, admitting that she’s just as addicted to her smartphone as everyone else. "But certainly in the run-up to the book, I noticed quite a few articles in the press about the phenomenon of smart home and digital abuse. It seemed to be a growing problem that the law hadn’t quite caught up with. The examples that I read about really epitomized the fact that it is, as you put so well in your question, a double edged sword because people are very often installing these devices for security and for convenience, but are then used in the opposite way.”

What Ware found during this period of research was a number of stories about people who installed the smart-ware in their home and used it to track, follow, and keep tabs on their partner. "It’s incredibly difficult to trace and to prove," says Ware. Phones and apps can now link to everything from air conditioners to lighting fixtures to speakers to door locks.

The New York Times, Psychology Today, and the National Domestic Violence Hotline have all reported on the escalating issue of abusers using smart technology to isolate and control their victims. So while Ware knew Heatherbrae House was going to be a smart house from the beginning, it was these findings that ultimately brought the idea to life.

If Christie read one of my novels she’d be absolutely appalled by my drinking, swearing, ill-disciplined characters."

Ware uses point-of-view to increase the physical and emotional isolation felt by Caine in the home. Her memory drives the narrative. Ware explains that this perspective was inspired by her interest in the unreliable narrator. "I wanted to write something where my narrator’s agenda was a little more apparent," she says. "You know right from the start that she’s setting out to prove something, that she’s going to be picking and choosing her account accordingly. To a certain extent, that’s what we all do when we tell a story. We’re always choosing which bits to report, which bits to suppress, which bits to emphasize, and which bits to slightly sweep under the rug." It’s up to the reader to decide whether they can trust Caine’s account, or if it’s just a ploy to get out of jail.

Since the release of her first book, In a Dark, Dark Wood in 2015, Ware’s been compared to a number of mystery writers like Gillian Flynn, Paula Hawkins, and of course, Agatha Christie. "I take them all as huge compliments," Ware says. "But I think we’re all very different writers. If Christie read one of my novels she’d be absolutely appalled by my drinking, swearing, ill-disciplined characters." But, Ware explains, if she manages to write "twisty, character driven novels" like the authors listed above — authors that she herself admires — then she’s perfectly happy to be in the same pool as them. In The Turn of the Key, she does just that, and solidifies her spot among the greats.