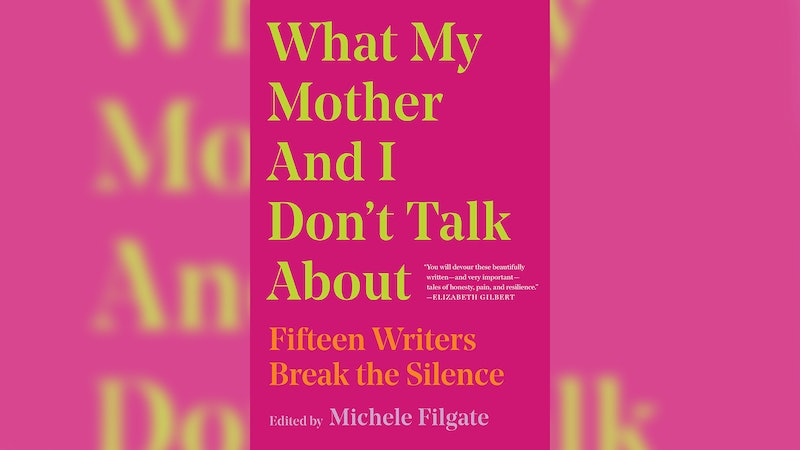 When I was growing up, my mother told me, repeatedly, that I could talk to her about anything. Her intent was pure, I surmised, but I still knew her petition was primarily a ploy, an effort to stay abreast of the youthful foolery in which I was bound to fall. I also discovered, pretty early, that the net she cast wasn’t as wide as suggested, that anything didn’t mean everything.

I thought about this while reading What My Mother and I Don’t Talk About, an anthology of essays edited by Michelle Filgate. I wondered if the mothers depicted within the pages had made the same pleas; I wondered whether they had implored their children to be open and honest in dialogue, even as their own responses made talking impossible.

It’s been four years since my father stopped taking my calls. The exact timeline is fuzzy, blurred by the fact that we hadn’t spoken regularly in years before that. Our relationship was strained after the divorce, pulled taut to almost breaking by child support garnishments, job instability, and drunken rages. Ultimately, I saw college as an escape from his volatility and my resultant insecurity in his presence, so when I packed my bags and left Kansas City for Statesboro, Georgia, I left no phone number or address. Any former semblance of a relationship is now utterly non-existent.

Yet my mom offers no solace. So marred was she by my father’s infidelity and embarrassment..."

If there is a wound that cuts deeper than the abandonment of a parent, it comes, perhaps, from the confusion on a child’s face as he inquires about a grandparent who exists, who is living, but who, nonetheless, occupies no greater space in his life than a branch on a family tree drawn with haphazard strokes of brown crayon.

This was the obvious question from my oldest son who, as of his fifth birthday, had never met or had a conversation with his maternal grandfather.

Of course she does. If she didn’t have a dad she wouldn’t be born.

That was my youngest daughter. Carrying a full seven years of wisdom, she felt wholly qualified to explain the basics of biology and human procreation to her little brother. Then, two years later, my husband's father passed, and her position shifted ever so slightly:

Now that Paw Paw’s gone, we really only have Nana.

My husband has lost both of his parents; his mother died before we ever met. And while my own mother is very active in my kids’ lives, the absence of my father remains a mystery that can’t be explained by death.

Yet my mom offers no solace. So marred was she by my father’s infidelity and embarrassment that she not only refuses to mention his name or acknowledge their relationship, but she met my earliest expressions of frustration and hurt with something that reeked, horribly, of apathy.

That the marriage bond could be simply severed by judge’s decree (and, for emphasis, a flame set to the marriage certificate itself) was perfectly reasonable to my mother. That I had logged an entire childhood and adolescence on the receiving end of my father’s wrath and yet didn’t revel in my adult isolation — instead choosing to send text messages that are never returned, reaching out to my grandmother to gather second-hand information about my half-sisters — is unfathomable.

I don’t know what to tell you, Andrea. You know how he is. Why would you even put yourself through that?

This is what she says, despite the begging eyes of my children, her grandchildren. Despite the fact that, while she is able to remedy one bad decision with another, equally binding, one, I have no such recourse. This, coming from a woman who is fiercely independent but who also receives a bowl of cooked collard greens and a handful of baked sweet potatoes from her own father every Saturday afternoon, lest she have to worry about feeding herself throughout the impending week.

On its surface, What My Mother and I Don’t Talk About is an anthology about the relationships we — the writers, the collective public — have with our mothers, how age and time has shifted a default dependence into an awakened coexistence in which we can choose to take part. Or not.

As a reader, you feel almost embarrassed to read these accounts — these delicate, well-crafted airings of dirty laundry

It is those things, yes, but it is also more. It is, ultimately, about the choices and lifestyles — some voluntary, some necessary — of the people whose very act of walking the earth has the most profound impact on us, their children. And it’s about how we deal with that fallout.

As a reader, you feel almost embarrassed to read these accounts — these delicate, well-crafted airings of dirty laundry. But you also carry a profound respect for these masters of introspection, for in their own confessions of parental conflict, they illuminate universal truths. They are confident in their apprehension, daring in their reticence, and for that, you are in awe. You know that when you carry conflicted emotions about the woman who gave you life, from whom you first sought joy and acceptance and protection, you don’t just keep those feelings from her. You typically keep them from everyone, tucking them away into the most inner recesses of your soul, the innate desire to protect more urgent than your own naked anguish.

They are ours, our mothers, even if they fail to always live up to the vaunted images we uphold.

“There is a story about my mother that I trot around as an antidote to other stories that I tell about my mother,” Lynn Steger Strong writes at the beginning of “The Same Story About My Mom.” “I have, over the years, used it both to show how she is good as well as how I think that she is bad.”

Collectively, the essays in What My Mother and I Don’t Talk About are a public confession of the misunderstandings we’ve all carried at some point or another — misunderstandings that sometimes slip into resentment when left unchecked. The essays are an acknowledgement that, without fail, our mothers have ceased to become the faultless, mythical creatures of our earliest imaginations and have been revealed, instead, as… well, people. People whose own hurts and pains and unresolved issues are inescapably projected onto those in their care.

But there is hope in these pages. Forgiveness and empathy, too.

Sometimes these issues take root and sprout, breaking ground as if massive sequoias, with trunks like wide, impenetrable barricades, too big and deep-seated and immovable to ever get around. Other times, the seed appears dormant; the soil of our relationships are smooth and unfettered on the surface, while below ground, a massive tangle chokes and binds.

But there is hope in these pages. Forgiveness and empathy, too. While the wisdom and maturity of adulthood — and certainly the act of becoming a parent — cannot absolve the past, they have a way of translating it, of providing subtitles over scenes that were once incomprehensible in the ignorance of youth.

In “16 Minetta Lane,” writer Dylan Landis is married with her own child before she can reconcile her mother’s past as the witty, intellectual friend of celebrated artists with the image of the bookkeeping housewife she ultimately became; her revelation is triggered, in part, by her own relationship with a black man. It is only when Bernice McFadden’s daughter runs away, triggering a familiar upheaval, that her mother explains why she refused to return to her own mother’s home to seek refuge, even after enduring years of abuse at the hands of her husband. And while Cathi Hanauer still can’t quite comprehend her mother’s willingness to remain so closely tethered to a husband who presents as equal parts domineering and loving, she accepts that she doesn’t have to.

Meanwhile, in “All About My Mother,” Brandon Taylor draws a portrait of his mother in sharp, unflinching strokes. Taylor’s mother was a Southern, black woman and thusly subjected to the horrors that Southern, black women often are; she was also angry and mean and distant and tired. Only now, Taylor writes, is he able to add the color and dimension to his rendering that she deserves. Only now can he, as he put it, “leave a space for her to be a person.”

My mother will be visiting my family in Nashville for Mother’s Day. She could stay in Kansas City with her parents, with her own mother whose speech is slurred and thoughts jumbled with age. When I used to ask for an update on my grandmother’s condition, my mom’s voice would crack over the phone. She struggled to articulate what it is like to see her mother — the woman who gave her life, from whom she first sought joy and acceptance and protection — now trapped in her own body, withering in the twilight. So we don’t talk about it.

Still, my mother is coming to be with us. She is kind, and she is considerate; she is inherently sacrificial. She will stay for two weeks, as is her custom, but it still won’t feel like enough. The calendar pages will melt away, and suddenly she will be packing up her things in our guest room, the one we have created just for her. As she is neatly rolling her tops and pants with an engineer’s precision, her grandchildren will come in one by one and ask her to stay longer. She will smile and say no, but she will promise to come back soon.

When the kids are gone, I will help my mother gather the last of her belongings, the ones she won’t leave behind for convenience’s sake. And I will ask her to stay, too. I will beg, actually, because we will still have so much more to talk about.