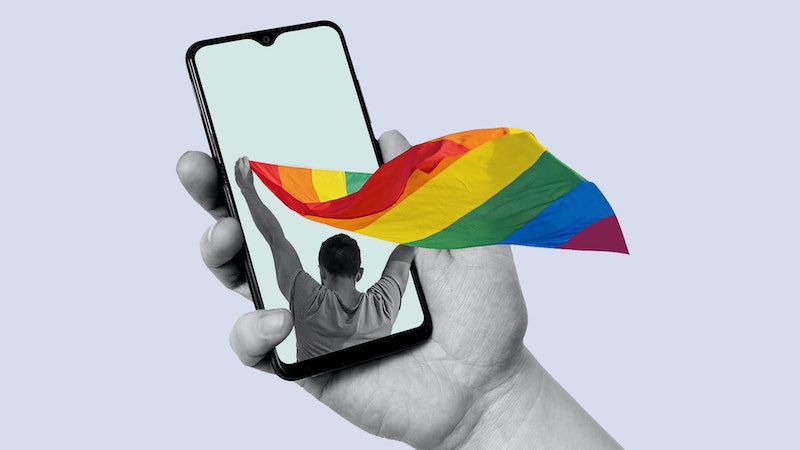 I started as a senior designer at Bustle four years ago, in the summer of 2016. It was my first job in media, and I was immediately impressed by the level of political and social involvement displayed by my new colleagues — even then, Bustle’s writers and editors were using Bustle’s huge audience and platform to publish messages of diversity and inclusion. I was immediately taken by the actions of my peers and wanted to get involved. I decided, with the support and encouragement of the editors, to write a piece for Pride month about the then-lack of inclusion of LGBTQ emojis on the iPhone. The Rainbow flag emoji was only added in 2016.

The country was still in mourning following the horrific Pulse night club shooting in Orlando, Florida, a city I had lived in for eight years prior to moving to New York, and I wanted to do anything I could to help with LGBTQ representation. I designed several new emojis based on my knowledge of queer history. Four years ago, I acknowledged that although focusing on emojis as activism may seem silly, representation is important, and I still hold that to be true.

Unbeknownst to me and the rest of the world, the next four years would bring seismic shifts to the way spoke about LGBTQ rights and the way they intersect with other disenfranchised communities. With the election of President Trump — and the support of the divisive rhetoric that came with his platform—came four more years of fighting for trans rights, gay rights, the rights of the Black community, Indigenous people, and non-Black people of color. Defending these rights also brought many of us a greater understanding of all of the different ways these fights overlapped.

Four years later, Pride month feels very different in America and across the world. The usual spirit of jubilation and joy that Pride brings has been replaced by a more somber tone — namely, righteous, justifiable anger and activism. Millions of people are taking to the streets to protest in memory of George Floyd, Breonna Taylor, and the hundreds of other Black people that have been killed by police across the country and world. This year Pride is not a celebration but a fight, and it feels appropriate. After all, the first pride was a riot, started by Black and Latinx trans women, like Marsha P. Johnson, who were fighting against police brutality at Stonewall. It's over 50 years later and we still haven’t made a lot of progress when it comes to society’s understanding of the intersection of race, gender identity and sexuality. Look no further than the despicable beating of Lyanna Dior to see how far we still need to go in protecting BIPOC trans people.

Looking back at this article and the designs that I created, I see a lot of optimism and hope, but I also see a limited perspective and a lack of intersectionality. I was looking at queer history from the point of view of a cis, white gay man and there were massive blind spots. Since then, I have made an effort to view queerness (a term that I wasn’t even comfortable using in 2016) with a lens of inclusion and intersectionality. In light of these efforts, I wanted to update the article (and emojis!) to be more representative of how diverse the queer community actually is. I hope that these updated designs expand that representation to include as many people in the queer community as possible.

The first and most obvious update I want to make is adding in the new and more inclusive pride flag. This version of the flag was designed in 2018 by Daniel Quasar in an effort to make a more inclusive design. The additions include pink, blue and white stripes for the trans community, as well as black and brown to represent the important place BIPOC have in the LGBTQ+ community.

For centuries, North American Indigenous communities have embraced the term “Two-Spirits” as an umbrella term celebrating those that identify with both the male and female spirits. Although the term wasn’t officially recognized until 1990, there is evidence of Two-Spirit identifying people dating back centuries. Two-Spirit members of indigenous communities often hold special positions of wisdom and power, sometimes referred to as the “dusk,” the space between the male morning and the female evening. Several symbols have emerged to represent this community, but two feathers are often included in the symbolism, a feather for each spirit. There is also an official symbol created by the 2-Spirit People of the First Nations, which shows a to half-faces, each representing male and female sides. Queerness is often thought of as a contemporary issue, but indigenous people have recognized its place in society for centuries and should be represented here as well.

As is with the indigenous community, Black people are responsible for many of the achievements in the movement for LGBTQ equality. Because of this, the Black Lives Matter movement has a natural place in a celebration of Pride. The success of both rely on each other, because the overlap is great. The raising of a clenched fist has long been a symbol used by the Black community to represent the fight for freedom and equality in the face of oppression. The symbol received a world stage in the 1968 Olympics in Mexico City when sprinters Tommie Smith and John Carlos donned black gloves and raised their fists on the medal stand in protest of the way the Black community was being treated. Emojis integrating this symbol with the pride colors would be a welcome addition to this collection of symbolism.

Queer people with disabilities are unfortunately an often overlooked but important segment of the LGBTQ community. I would love to see symbolism integrating the Pride flag with the updated wheelchair symbol designed in 2010 by Sara Hendren and Brian Glenney. The updated design makes effort to differentiate the person from their chair, as well as instill a feeling of motion. This symbol in pride colors would be provide wonderful representation in this collection.

This article was originally published on June 24, 2016