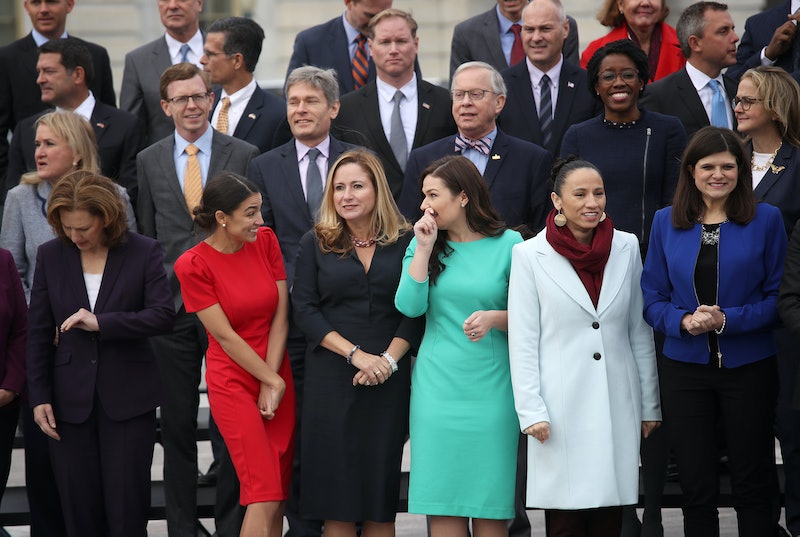 Despite the Dems' blue wave during the midterms, not all the incoming representatives are looking to make more once they take office in January — at least not when it comes to investigating the Trump administration. Some 46 incoming House Democrats wrote a letter to party leadership, including Minority Leader Nancy Pelosi, to request that legislating be the new Congress' focus, not just investigating.

The letter didn't rule out investigations of the administration, but it made clear that these new, diverse Dems want to take action on everything from health care and immigration to the environment, the Washington Post reported.

"While we have a duty to exercise oversight over the Executive Branch, particularly when the Administration crosses legal lines or contravenes American values, we must prioritize action on topics such as the cost of healthcare and prescription drugs, our crumbling infrastructure, immigration, gun safety, the environment, and criminal justice reform,” the 46 incoming representatives wrote. "While we may not always agree on how to approach every issue, we are united in the belief that we have a mandate to debate, draft, and work across the aisle to pass legislation."

The different viewpoints were reflected on positively in the letter. "We are a diverse group," the letter reads, noting that the incoming class of representatives was the most diverse in history, with the largest number of women and LGBTQ representatives ever — as well as historical firsts for representation with Muslim and Native American women.

This same group is set on working with Republicans. "We are united in the belief that whatever the differences we may have with our Republican colleagues, it is our solemn responsibility to debate and pass legislation that improves the lives of those who elected us," the letter continues. "And despite how the media may focus on our differences, we are united in the belief that the diversity of our Caucus makes us stronger, not weaker."

The letter included several other requests — in addition to the focus on legislation — that have largely already been agreed upon by Pelosi like regular meetings between the class and leadership. Some of the more interesting demands that are still being worked on are those that would give two freshmen Democrats a spot on the powerful Democrat’s Steering and Policy Committee, instead of the normal one.

An interesting one for voters across the country is the request that committee hearings don't just take place in D.C., but also "outside of Washington whenever possible." "Citizens across the country should have the opportunity to attend hearings that impact their lives," the letter reads.

The letter also requests that all bills be introduced at least 72 hours before they're voted on, so that members and their staffs have time to read them. Politifact reported that the GOP House leadership implemented a similar rule but has waived it when they decide it's necessary.

Two other rules would require bills with 290 co-sponsors or more would get prioritization on the floor and that any member can submit legislation to a committee "in an open setting."

Whether all demands are met remains to be seen, but Pelosi will be looking to pick up votes ahead of the full House vote on her speakership in January.