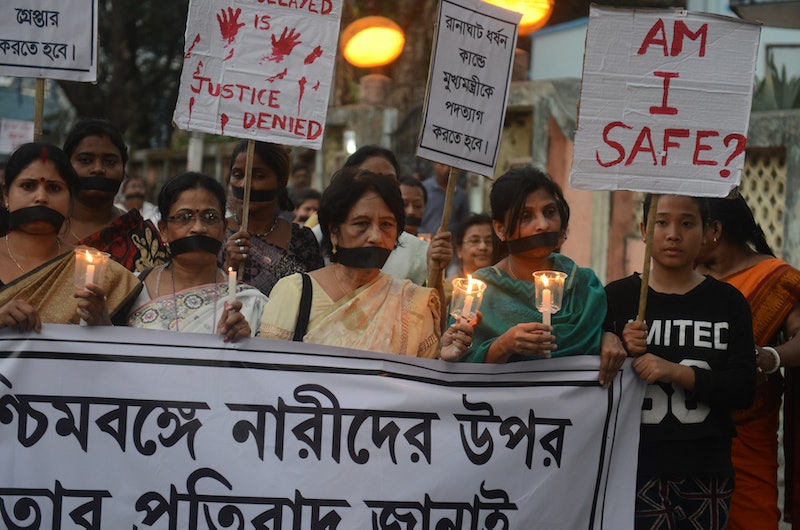 India's slow march toward gender equality suffered a setback this week after a key legal ruling cast doubt on the nation's commitment to prosecuting sexual assault. A Indian judge overturned a Bollywood director's rape conviction, and the reasoning behind the ruling is nightmarishly misogynistic.

“Instances of woman behavior are not unknown that a feeble no may mean a yes,” Justice Ashutosh Kumar wrote in the official case ruling, according to The Guardian.

This all came despite the victim's testimony that she had said no multiple times and the assailant had restrained her arms. But Mahmood Farooqui, the Bollywood director who was convicted of the crime, told the court he believed "the [alleged victim] is OK with it and ... participated in the act," the judge said. Lawyers for the director claimed the incident never happened, but if it did, they say Farooqui didn't know the woman did not consent.

The survivor is an American graduate student who has remained unnamed throughout this process for her privacy. On March 28, 2015, Farooqui allegedly raped the young woman at her apartment in Delhi. He was originally convicted to a seven-year prison sentence last August, but the ruling was reversed by Justice Kumar of the Delhi High Court on Tuesday.

At the time, the initial conviction was groundbreaking because it added a new charge assailants could face. The victim's lawyer Vrinda Grover said, according to The Guardian:

This is perhaps one of the first cases of forced oral sex, which shows two things: that there was a crime for which we did not earlier have an offense named — now it has been recognized as rape. We’re also very happy to see that the court relied on very credible evidence that the woman gave.

According to legal documents, the victim eventually stopped trying to physically fight back against Farooqui because she was afraid for her life, which was interpreted by Justice Kumar as her giving consent. He essentially wrote that it was "unclear" whether she consented or not after the point where she became too scared to resist, so the benefit of the doubt in the situation had to go to the man.

India has had a complicated relationship with women's rights in the modern era. The nation elected its first female prime minister before many other countries in the region had even secured women the vote, but in most social aspects, the country has been slow to progress — it's still rated the worst place for women to live out of the G20 nations, and India ranked 125th on the United Nations Development Project's Gender Inequality Index.

In 2012, the brutal gang rape of a woman in Delhi shook the nation to its core and lead to massive protests. Tens of thousands of women across the country marched in the streets demanding stricter punishments for assailants, which were swiftly enacted by Parliament. The Supreme Court denied the convicted attackers' appeal against their original death penalty sentences, and the entire chamber erupted in applause at the decision. However, the ruling in this case could be extremely detrimental to those progresses.

This ruling could just be a passing remnant of old Indian attitudes toward women and sexuality, but the problem is that for now it's part of the national legal precedent. Other cases could be judged based on this, and in any type of patriarchal society, this ruling could make it much for difficult for victims to get justice.

The overturned conviction may be headed to the Indian Supreme Court, so there's hope that it won't have much effect on future rulings. It's also possible that judges could reject this precedent and continue enforcing the law as previously interpreted. Either way, now is not the time to give up hope for women's right in India.