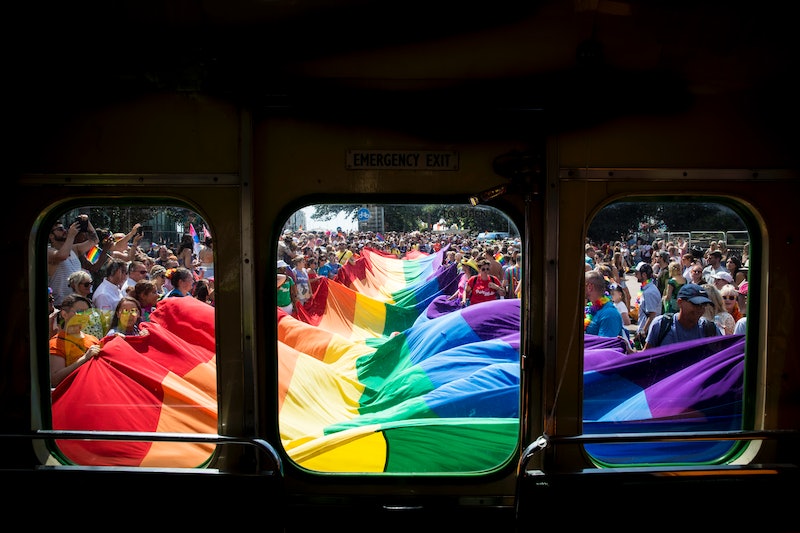 In perhaps the strangest bout of school rules in recent memory, an Indiana high school's gay-straight alliance can't use the word "gay" or "GSA," the popular acronym for clubs around the country that provide safe meeting spaces for LGBTQ kids and their friends, according to a new lawsuit reported by The Daily Beast. The American Civil Liberties Union (ACLU) of Indiana filed a lawsuit on behalf of members of the Leo Pride Alliance at Leo Jr. Sr. High School on Friday, alleging that the East Allen County Schools have "imposed undue, unequal burdens" on the students. According to the ACLU, the administrators nixed a club called "Leo GSA" in favor of the "Leo Pride Alliance."

"Pride Alliance" at first sounded like a compromise. But according to a release from the ACLU of Indiana, in this context, "pride" is now an acronym for "Professionalism, Respect, Integrity, Diligence, and Excellence." Furthermore, the students apparently can't use "gay," "GSA," or related words when promoting their club and are "not allowed to meet outside of a single classroom, or participate in school fundraisers," according to the ACLU. "There is a lot of language policing," ACLU of Indiana Legal Director Ken Falk told The Daily Beast.

The complaint detailed other actions taken against the club reportedly not required of other clubs. "It asked to put up a bulletin board for LGBT history month as other school clubs have bulletin boards. However, it was initially told that it could put up a bulletin board only if members performed community service outside of the school, a requirement not imposed on any other club," the filing read. You can read the full complaint, filed in U.S. District Court for the Northern District of Indiana in Fort Wayne, here.

"Very recently, however, the school administration has indicated that it may allow a bulletin board provided that it approves of its content," the complaint added.

At least 40 states have GSA clubs in high schools and middle schools, according to the GSA Network. California has more than 1,100 registered chapters. The GSA Network said a GSA club is legally allowed to exist if other non-curricular-based clubs are established at the school — for example, a chess club — under The 1984 Equal Access Act and the First Amendment.

GLBTQ Legal Advocates & Defenders elaborated in a primer on GSAs in schools: "Equal access means that the GSA must be afforded all the same rights and privileges as other student groups to use the facilities at the school for meetings and communications."

The GLBTQ Legal Advocates & Defenders said several lawsuits have attempted to water down the name of GSA clubs at schools. "In all those cases, the GSAs have won the right to keep their name and their mission and the courts have found that it is impermissible for a school board to condition approval of the establishment of a GSA on a name change," the advocacy group wrote.