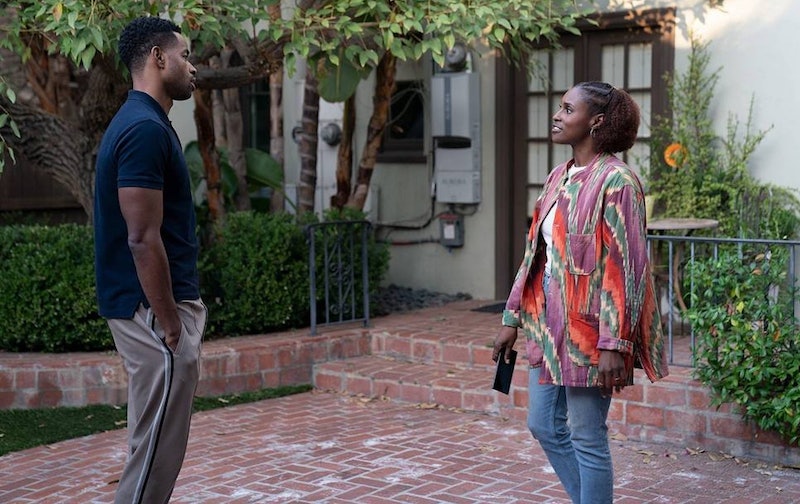 Issa and Lawrence's contentious relationship has long been a topic of debate for Insecure fans. There's the Lawrence Hive, those fiercely devoted to his character, and there's the faction pulling for Issa to end up with someone new. Insecure star Jay Ellis knows Issa and Lawrence's relationship is a hot button issue among fans, and heading into Season 4, there's no sign of the drama slowing down — especially now that Issa is friends with Condola (Christina Elmore), who just so happens to be dating Lawrence. Yeah, Ellis thinks it's weird, too.

Meanwhile, Issa and her ex are back on speaking terms. Whether they can, in fact, be just friends is something Ellis says they'll explore this season. He points out that "friends" is such a broad concept. "What does that even mean?" he asks. "Does that mean that like, y'all are kicking it on the weekends? Like, you know, 'Let's go grab a drink!' Or does it mean that you're just cordial and cool with each other?" It's a valid question that Ellis says Lawrence and Issa need to address because their social circle is so tiny (their small friend group is how he and Condola met in the first place).

But while Issa and Lawrence may never be as close as they were before all the sh*t hit the fan in Season 1, Ellis says the former couple's connection runs deep. "I personally believe that we all have soulmates, and I think we probably all have a few out there in this planet of 7 billion people," he says. "And you might get to meet one somewhere along the way. And I think when you do meet that one, it may not work out, like in their situation." But although Lawrence and Issa didn't ultimately stay together, Ellis explains that they will always have a bond. "You still want the best for that person," he says. "[You] still, in some ways, feel at ease with that person. They get you and you get them."

As a result, Ellis says Issa and Lawrence have each made peace with their breakup. The Insecure star theorizes that when Issa told Molly in Season 3 that she was over Lawrence, she really meant, "I don't need to question whether or not him and I are supposed to be in a relationship anymore," he says. "I think [she's just] like, 'Yo, that could be my friend.' In passing, that could be my friend."

Lawrence and Issa's relationship aside, Ellis teases that his character will be making some pivotal career moves this season, much like Issa did in Season 3. "We get to see him... think about a different career or different role in the career that he has, because now he has more confidence in his skill set," Ellis says.

At the same time, Lawrence is trying to explore this new relationship with Condola. "Can you have the girl and the job at the same time?" Ellis posits. "Can you really have happiness and [a] career, or does one always suffer because of the other? We get to see him go through those ups and downs figuring that out this season."

Insecure fans may want to brace themselves, because Ellis warns that this season "gets messy." But when hasn't it?