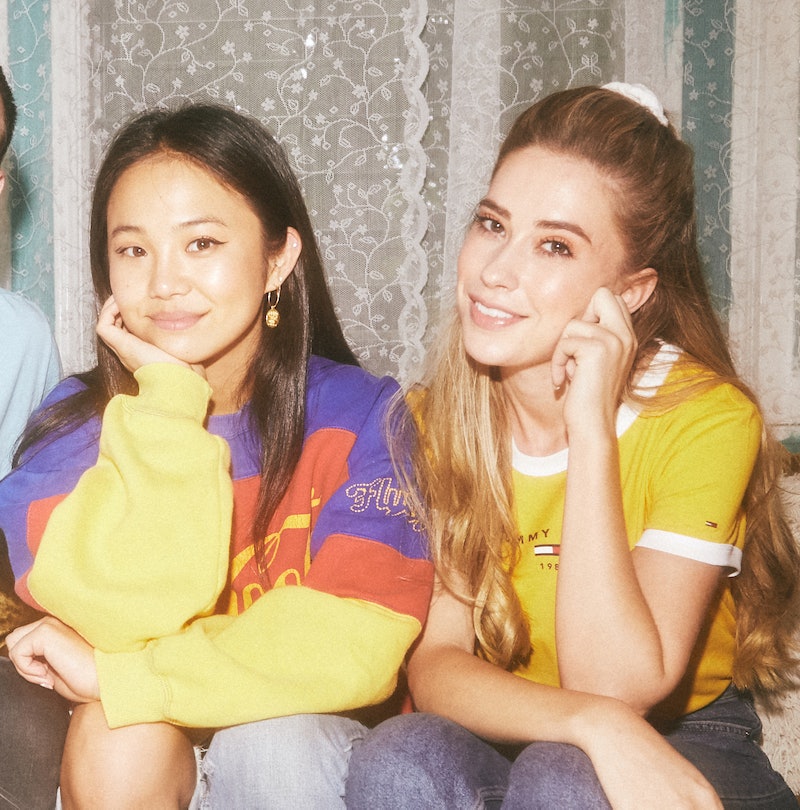 In an age where celebrities and influencers are switching up their hair looks as often as their nail polish colors, it can be hard for us normals to keep up. But thanks to a slew of online wig and extension brands that have recently come onto the scene, you too can have a long, lustrous ponytail by day and a sultry, chic bob by night. Insert Name Here is the latest affordable, on-trend brand to offer easy-to-use clip-in ponies, bangs, extensions, and wigs. While it might seem similar to its competitors, co-founders Sharon Pak and Jordynn Wynn think their unique relationship sets their brand apart.

Pak and Wynn first met as freshmen in the same dorm at Pepperdine University in Malibu. They didn't become friends immediately, but kept ending up in the same classes and getting paired up for projects. "We were the losers that sat in the back of class," Pak tells Bustle, speaking on how they connected. Finally, they gave into fate and became close their senior year. Upon graduation, Pak and Wynn found themselves as two of the first employees at ColourPop Cosmetics in Oxnard, just up the coast from where they first met. There, under the guidance of John and Laura Nelson, ColourPop's co-founders (and creators of SEED Beauty, the manufacturers behind Kylie Cosmetics and KKW Beauty), Pak and Wynn helped build the direct-to-consumer makeup brand as the unofficial faces of ColourPop.

"We had a once-in-a-lifetime opportunity to be a part of ColourPop from concept to launch. In the beginning we did a bit of everything from product development, social marketing, to customer service and uploading products onto the site — basically everything under the sun," Wynn says of their five years at ColourPop together.

Their coworkers and followers of the brand began to call the two “Shordynn” — once strangers, they were now a unit who did everything together. After ColourPop, they knew they didn't want their journey to end there, which is why they decided to embark on their next joint venture — Insert Name Here.

Wynn tells Bustle that the two have always wanted to start their own company, but they weren't quite sure what it would be. "I would always send ideas for businesses to Sharon, just for fun. Some were pretty whacky — like a sofa company — and Sharon would be like, 'Ehh, that’s not the one,'" says Wynn.

One day, Wynn brought up the idea of wigs and hair products, after seeing so many celebrities and influencers testing out the space. "Sharon, right away, was like, 'OK, that’s actually not a bad idea.' We started doing a little bit of research, ordering wigs and other hair pieces and realized it’s so hard to find a reputable brand with quality products. We actually ordered a wig inspired by Kim K’s silver hair and it literally had black Sharpie marker for roots," Wynn shares.

Shortly after, they had a very "serendipitous dinner," as Wynn describes it, with one of their friends named Kevin Gould, who would later become their other co-founder. "He really encouraged us to take the concept more seriously. Literally the day after we told him our idea, he sent us a whole market research report on the space and was basically like, 'We are doing this.'"

Wynn, Pak, and Gould began building the brand, keeping the focus on creating quality products at an affordable price — a similar model to ColourPop and something they knew was crucial to the millennial and gen Z consumer. They would know — Wynn and Pak are are intimately familiar with the 20-something woman. Besides being two themselves (Wynn and Pak are 28 and 27, respectively), they had the opportunity to watch and interact with the young ColourPop audience that they helped grow.

Additionally, Wynn and Pak both built large followings on their personal Instagrams (a combined 148,000 followers), becoming influencers in their own right. Their followers — mostly millennial and gen Z women — constantly ask them for fashion and beauty advice, especially when they'd play with their hair looks on Instagram. They knew that the Insert Name Here girl obsessed over the latest celebrity hair trends and wanted to recreate them easily, without spending a chunk of their paycheck.

Over the last year, Wynn, Pak, and Gould have worked on creating a variety of extensions and wigs in styles that are "hot" and relevant — like the Ariana ponytail and the Kim wig — none of which will cost you more than $200. "We really want to deliver on-trend, quality, and approachability," says Wynn.

They're also using their social media-savvy fan base as a focus group for the kinds of products they should be launching, engaging with their followers in the comments and through Instagram Stories. "We have some really unique concepts coming up in the next couple months that have already been highly requested and we can’t wait to reveal."

Another thing that's important to Wynn and Pak is to be completely genuine and authentic with their fans. "We also want to be really transparent and share the process of building a brand with our followers and customers. Everyone always sees the glossy finished product, but not the ups-and-downs that are going on behind-the-scenes," says Wynn. This, of course, includes their relationship, not just as business partners, but also as friends.

"People say you shouldn’t get into business with your friends, but we knew we couldn’t do it without each other."

And while many founders might dissuade future entrepreneurs from starting a company with their best friend like Wynn and Pak, they feel like their friendship is what will ultimately make their brand successful.

"After working so closely for five years, not only did we become best friends, but we were really able to see how our skill sets and personalities balanced one another out. We also learned that we could really trust each other. We had some pretty intense moments at ColourPop, but we were always able to work through it and we know that is what makes or breaks a partnership," says Wynn. "People say you shouldn’t get into business with your friends, but we knew we couldn’t do it without each other. We felt like we had a really special relationship and knew we wanted to stick together."

More like this
The Body Shop’s New Range Has More Antioxidants Than Retinol
By Justine Knight
12 Stunning Beauty Moments From London Fashion Week S/S 2023
By Olivia Rose Ferreiro
15 Must-Have New Beauty Launches, According To Our Editors
By Rachel Lapidos
This Week’s New Makeup Releases & More Beauty Headlines
By Audrey Noble
Get Even More From Bustle — Sign Up For The Newsletter