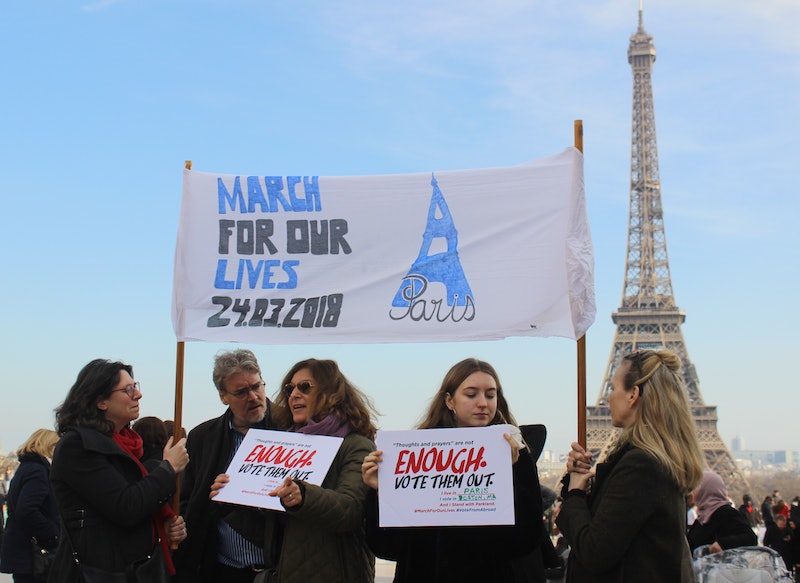 Like many of the Parkland shooting survivors who rallied in Washington, D.C. for the March For Our Lives on Saturday, 17-year-old Emily Beam is a high school student. But unlike them, Emily lives an ocean away, in Paris, France. She's a senior at an international high school, and has spent almost two years in Paris after growing up in the U.S. However, not being in the States has not stopped Emily from getting involved in the global fight against gun violence at Paris' very own March For Our Lives.

As the students of Marjory Stoneman Douglas High School and their allies took to the streets in D.C. for the March For Our Lives, Emily and her classmates organized a sister protest in Paris. Hundreds of people rallied at the Place du Trocadéro on Saturday, with the Eiffel Tower creating an iconic backdrop for signs and banners condemning gun violence in the U.S. And for Emily, who attended American public schools for most of her life, Saturday's rally was an opportunity to take a stand on an issue that frequently weighs on her.

"A lot of my friends are legitimately scared for their own lives in the U.S.," Emily tells Bustle. "That’s part of the reason I’m getting involved today and hopefully more in the future, because I don’t want to let these things be happening in the U.S. and I would like to be able to make a difference even from abroad."

Emily and a couple of her American classmates were already interested in organizing a protest in the aftermath of the Parkland shooting when they got in touch with youth caucus leaders from Democrats Abroad France. Together, they were able to obtain a rally permit and make Saturday's protest a reality. For one of the youth caucus leaders, Claudia Varney — a graduate student who used to live in Los Angeles — the issue of gun violence hits fairly close to home.

"In France, I’m never thinking someone might have a gun," Varney tells Bustle. "It’s not a thought. You don’t have to think about that. Living in L.A. and living in Paris are wholly different experiences. When I was in L.A., my roommate had the window of her car shot out by a gun."

Varney adds, "On a political level, it’s such a small ask to regulate something that has the capacity to kill so many people so easily."

Varney also argues that the fight against gun violence is an intergenerational one. This was exemplified at Saturday's rally in Paris, where mothers attended with their daughters and activists of all ages participated in chants of "not one more!"

One of them was Ramie Leibnitz, an American who decided to spend her 54th birthday challenging gun violence at the rally. She has been living in Paris for almost four years, but her daughter is a college student in the U.S. And Leibnitz tells Bustle that her daughter's safety frequently weighs on her:

I know that many of my friends that have moved from Paris and are back in the States, they are literally scared to send their kids out the door everyday and know that this can happen in the schools at anytime. I know that in colleges they're supposed to be independent, but they're still kids and we parents still worry, and we can't protect them because we're far away. This should not even be a concern and yet it is.

It was for this reason that so many Americans — as well as their French allies — gathered across from the Eiffel Tower on Saturday. For Americans living abroad in France, where the number of privately owned guns dropped from 19 million to 10 million over the span of 10 years, it's difficult to process the fact that mass shootings seem to have become the norm in their home country. As Varney suggests, Saturday's rally was therefore a form of "catharsis" in some ways.

In order to demonstrate solidarity with those marching in the U.S., the protesters in Paris held a moment of silence, during which they held up photographs of the 17 Parkland shooting victims. The moment of silence was followed by various musical performances, to which rally attendees sang along. Organizers also created a banner documenting the total number of people who had died in American school shootings from 1918 to 2018; each life was represented by a tally mark, and the banner spanned several yards.

This high rate of gun violence and mass shootings in the U.S. is something that is incomprehensible to Ha Hoang. The 47-year-old grew up in Chicago, but she has been living in Paris since 2000. She attended Saturday's rally with her 14-year-old daughter, who was born in Paris. Protesting gun violence alongside her daughter, whose idea it was to attend the rally in the first place, made Hoang feel hopeful that the next generation would be able to achieve change.

"I think this is wonderful that she wanted to raise her voice," Hoang tells Bustle, "I'm really happy to support her because I think this is really going to be a movement about young people who see their future and hopefully can push for change. ... I don’t think it’s going to happen any other way."

In order to ensure that the rally was part of a movement for substantial change, rather than just a moment, organizers arranged for attendees to register to vote in local and national elections back in the U.S. The March For Our Lives in D.C. also had similar efforts to push for increased voter registration, while the rally in Paris focused on the power of absentee ballots. Democrats Abroad France estimated that dozens of people registered during the rally, but did not have an exact figure available at press time. Moving forward, march organizers plan to continue campaigns of voter registration in universities and study abroad programs across France.

The Parkland students have refused to remain silent in the aftermath of the shooting, and their persistence has sparked a renewed global movement against gun violence. In Paris, rally attendees were visibly empowered and inspired by the resistance they saw in their expat community, and they were not alone. Hundreds of marches were organized around the world on Saturday, in the hopes that the Parkland shooting would finally be the last mass shooting in the U.S.