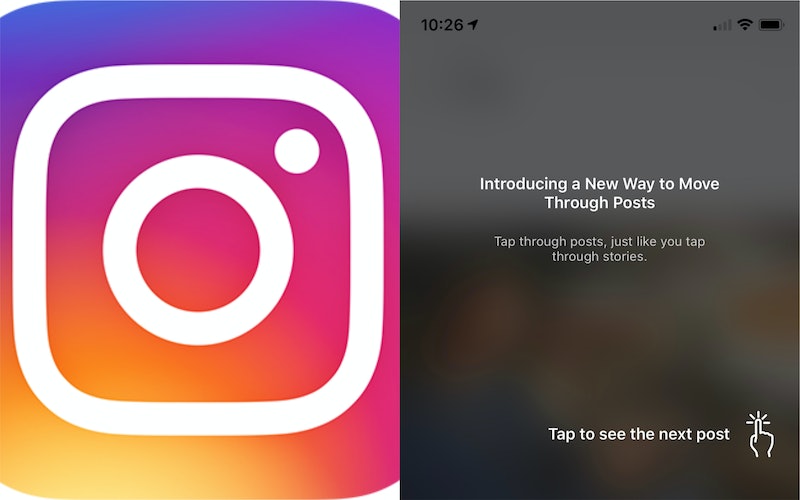 Many people are resistant to change, especially when they don't know it's coming. If you woke up this morning expecting to treat yourself to a few minutes of mindless Instagram scrolling before getting out of bed, you may have been met with a surprise. An Instagram bug temporarily replaced scrolling with tapping. If you were one of the people who suddenly had a horizontal Instagram tapping scroll, everything is going back to normal — Bustle reached out to Instagram, and the app confirmed that scrolling should be restored on all Instagram mobile feeds.

"Due to a bug, some users saw a change to the way their feed appears today," an Instagram spokesperson told Bustle over email. "We quickly fixed the issue and feed is back to normal. We apologize for any confusion." The spokesperson added that if your feed is still going sideways, restarting your app should restore your vertical scroll.

Although Instagram did not clarify what caused the bug, users may have experienced a wider rollout of a previously testing "Tapping" feature in Explore; Instagram confirmed to TechCrunch in October that the app was testing this feature on that specific page. However, the rollout that temporarily went through this morning affected all of Instagram's pages, save for the desktop version.

If you weren't a part of the mayhem this morning, a bit of background on what happened to people who where: IG users who woke up to the new display received a message that read: "Introducing A New Way To Move Through Posts." Instead of scrolling down like usual, the IG feed appeared horizontally like Instagram Stories, allowing you to tap through them. If you logged in after the bug was resolved, you likely never even knew something happened at all.

The post-Christmas surprise caught a lot of people who likely have fruitcake and eggnog hangovers off guard. Because there's already enough confusion between Christmas and New Year's (what day is it again?), people may have had a stronger reaction than they normally would. Luckily, Instagram stepped up and quickly rectified the situation.

While the sudden change may have been jarring, people have historically resisted changes to their favorite social media sites before adopting them as if that's the way it always was. Snapchat already has a horizontal tapping feature, which according to Josh Constine at TechCrunch, could ultimately save you from scrolling thumb if it is eventually rolled out on Instagram.

Texting and scrolling thumb are real. Dr. Robert Wysocki, an orthopedic surgeon at Rush University Medical Center in Chicago, said in an article that people over 30 are most likely to suffer joint problems from scrolling. If this potential update can prevent that, it's ultimately a good thing.

But for now Instagram has not publicly announced any plans to roll out this update to a wider audience. If you were one of the people who got the update, you should now be able to return to your regularly scheduled scrolling for the rest of the holiday break. Just remember to give your thumbs a break every now and then.