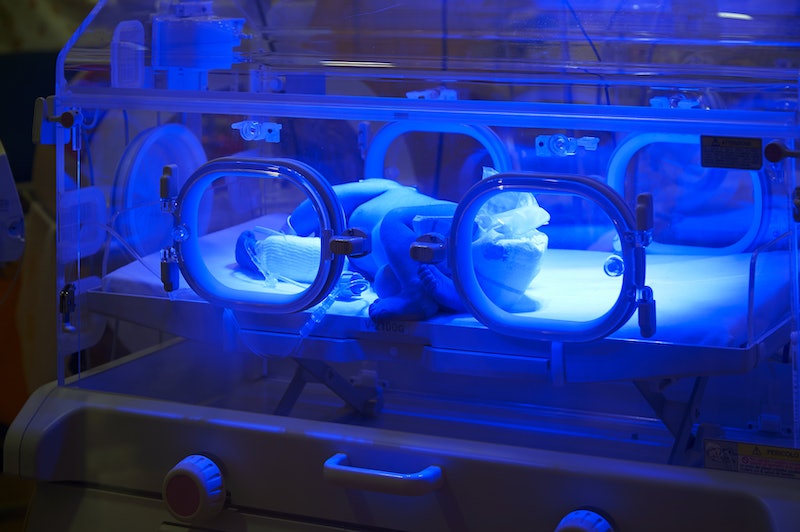 Intersex children — those who are born with genitals that aren't easily classified as either male or female — face a human rights threat in the U.S., according to Human Rights Watch, which in 2017 published a report noting the "physical and psychological damage" caused by unneeded surgeries performed on intersex children. These surgeries aren't uncommon in the U.S., but soon they may not be commonplace in one state: California is positioned to become the first state to protect intersex children from surgeries that unnecessarily restructure their genitals to fit into a binary structure of sex.

About 1.7 percent of people are born intersex, which means they're born with "chromosomes, gonads, sex organs, or genitalia that differ from those seen as socially typical for boys and girls," according to Human Rights Watch's 2017 report, written in conjunction with intersex activism organization interACT, which has lobbied for SCR-110. According to ThinkProgress, around one in every 2,000 newborns may have a doctor recommend they get surgery because they're intersex. Surgeries performed on intersex children have "the stated aim of making it easier for them to grow up 'normal,'" Human Rights Watch said in its report, but the results "are often catastrophic, [while] the supposed benefits are largely unproven."

California's proposition, SCR-110, "aims to delay medically unnecessary procedures until such time as intersex people can decide for themselves if they want them," The Cut reported. If passed, SCR-110 wouldn't ban all surgeries on intersex people — if, for example, a child is born without a urinary opening, lifesaving surgery would be required. Rather, SCR-110 focuses entirely on consent from intersex people and on delaying unnecessary genital surgeries, which according to Human Rights Watch, are based on a medical theory that became popular in the 1960s, but which doctors continue to recommend to parents today.

Kimberly Zieselman, an intersex woman and the executive director of interACT, said in Human Rights Watch's report, "The devastation caused by medically unnecessary surgery on intersex infants is both physical and psychological. Despite decades of patient advocates putting the medical community on notice about the harm from these procedures, many doctors continue to present these surgeries to parents as good options."

To fully explain the effects unnecessary "corrective" surgeries can have on intersex people, ThinkProgress highlighted the story of a woman who was born with nonbinary external sex characteristics. At three months old, the woman, Betsy Driver, was given a total clitorectomy, and continued to undergo more surgeries as she got older, one of which made her incontinent, and one of which gave her a venereal disease. A 2005 report from the investigation into Driver's situation by the San Francisco Human Rights Commission stated that "[a]ll of the surgeries and attention taught her that her body was unacceptable and something of which to be ashamed."

With SCR-110, advocates hope that it will kick-start the path into a future where intersex children will not have to go through what Driver did, and that intersex people will be given the chance to consent to surgeries that change their genitals. "The first goal is to get a resolution passed that will actually show that the state of California is making a strong statement in support of intersex rights and intersex people … that’s a big achievement," Zieselman told ThinkProgress. "We’ve never had a state or legislative body in the U.S. come to consensus on that and say that."

In a March statement, California state Sen. Scott Wiener (D), who introduced the resolution, said, "Our medical community needs to help families to take a more measured approach to surgery. California has long been a leader for all people, and we can lead the way in supporting intersex children and their families.”

Correction: The headlines of this story have been updated to more accurately reflect the nature of the legislation.