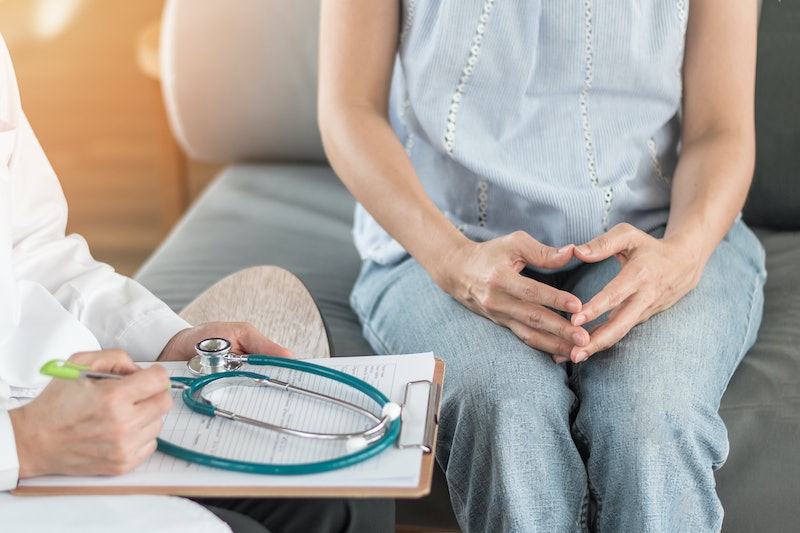 Following two mass shootings in El Paso, Texas, and Dayton, Ohio, President Donald Trump has called for mental health reform, rather than gun control. In a speech on Aug. 5, Trump said that as president, he plans to increase involuntary "confinement" to psychiatric facilities to prevent domestic terrorism, the Washington Post reported.

“We must reform our mental-health laws to better identify mentally disturbed individuals who may commit acts of violence,” Trump said, “and make sure those people not only get treatment, but when necessary, involuntary confinement.”

Trump’s comments are concerning for several reasons. The American Psychological Association pushed back on this, saying in a statement released on Aug. 4 that blaming mass shootings on mental illness is “unfounded and stigmatizing.” Also, overwhelming evidence shows that mass shootings are not caused by mental illness. In fact, people with mental illness are 10 times more likely to be victims of violence — not the perpetrators of it — according to the U.S. Department of Health & Human Services.

It's important to stress that the symptoms of mental health issues are painful, and they can be life-threatening. For people who are at risk of harming themselves, involuntary commitment can sometimes save lives. But involuntary commitment is a process that’s highly stigmatized, and its history and current implementation can often have a traumatizing effect on patients. A study published in European Archives of Psychiatry and Clinical Neuroscience stated that often “shame and self-contempt [are] emotional reactions to involuntary hospitalization.” An article review published in Psychiatry (Edgemont) explored the carceral origins of involuntary psychiatric admittance, showing that the practice can sometimes criminalize mental illness. The most notorious example is London’s Bethlem Royal Hospital — nicknamed Bedlam — an "insane asylum" founded in 1247 that often used involuntary commitment as a tool of oppression against women and used cruel "treatments" that are now regarded as torture methods. Virginia’s Central Lunatic Asylum for Colored Insane, opened in 1862, often listed the cause of mental illness symptoms as "freedom," which pathologized emancipation from slavery.

These are old examples, and mental health care has made tremendous strides since then. But research shows that this painful history may not be completely eradicated. A 2016 survey from Mad In America, a nonprofit platform that advocates for "rethinking psychiatric care," showed more than half of the over 500 respondents described their psychiatric ward experience as “traumatic,” with 37% reporting physical abuse and forced treatment, and 7% reporting sexual abuse. Only 17% said they were “satisfied with the quality of the psychiatric treatment” they received.

Involuntary commitment is an important resource because it can sometimes save lives. However, mental health providers and legislators need to examine the ways that the practice can also be used as a tool of harm, especially against people who exist at the intersection of mental illness and other marginalized identities, like race and gender.

I've struggled with mental illness for most of my life. My first time being involuntarily admitted, when I was 20 years old, was helpful overall. I think the supervision and medication helped save my life. But I was also involuntarily admitted after a suicide attempt in my sophomore year of college due to trauma from a sexual assault. That experience was horrific. My therapist called the police to the office to come take me to the government-run hospital, and the officers handcuffed me and put in the back of a paddy wagon. At the hospital, I was grouped with men and women who were much more acutely ill than I was, and at several points I was threatened with sexual assault by other patients. Although I was released in about seven hours, that experience stayed with me for years, and I continue to have panic attacks stemming from it. Criminalizing Black women and putting them in danger of sexual assault is not healing or survivor-centered.

That's why it's important to understand the potential effects of involuntary commitment before believing that increasing this practice will help cauterize the tragic flow of gun violence in the U.S. It won't. And increasing the practice without being critical about the flaws in the system, or having empathy for those who go through it can cause a lot of harm.

I shared my story here because I think it's important to put a face to a practice that not many people know about. Here are four other women's stories of how involuntary commitment impacted them.

Trigger warning: This story contains mentions of sexual assault, self-harm, trauma, and suicidal ideation that may be triggering.