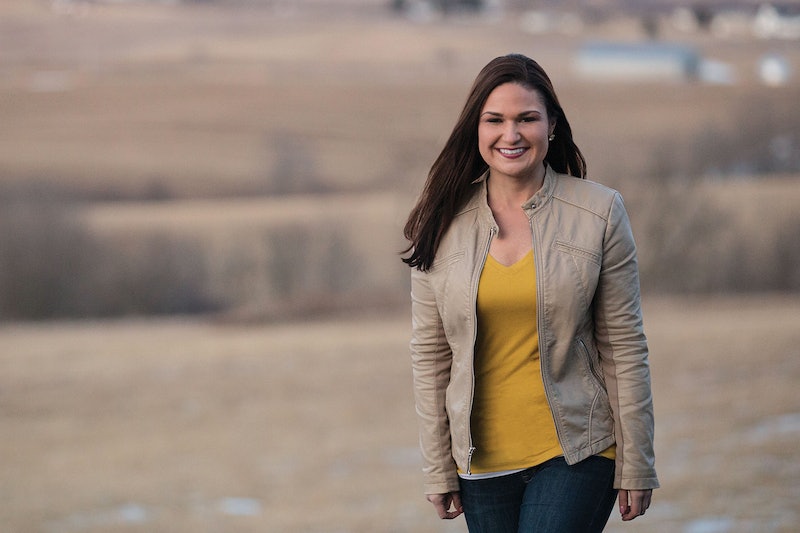 In the torrent of new diversity that will soon pour into the House of Representatives, not very many people are talking about Iowa — but maybe they should be. The Hawkeye state elected its first two women to the House of Representatives — and one of them is only 29. Abby Finkenauer, who will soon represent Iowa's 1st District, ran on the promise of standing up for working class families. Because of her background, though, this isn't just an abstract promise for the current Iowa state representative.

"So much of this race is personal because of the fact that working class families here in Iowa have been forgotten in D.C.," Finkenauer tells Bustle. She came from a working class family herself, and she enters Congress with a problem familiar to many of her peers: $20,000 of student loan debt.

"I’m a first generation college grad, I have brothers and sisters who are all first generation college grads, and we were all paying off student loans," the congresswoman-elect says. "My dad was a union pipe-fitter, my mom was a school secretary, they worked really really hard, they helped get us to college but they couldn’t afford to pay for it all."

Finkenauer's working class roots sharply contrast her with her opponent, GOP Rep. Rod Blum, who, as she said, could "write himself a $500,000 check."

"It shouldn’t be this hard for working class families to be able to run for Congress and represent their friends and family," Finkenauer tells Bustle, recalling a moment on the campaign when the financial disparity between her and her opponent hit her. "It would’ve been very, very easy at that moment to walk away, that it couldn’t be done."

In the end, as CNBC reported, she managed to out-raise Blum — with average donations of $20, she says.

Her success ended up being part of a wave of female success in this election in Iowa at both the federal and state level, as the Des Moines Register reported. Finkenauer called it "pretty exciting" and emphasized the importance of diversity, while also saying that women shouldn't run for that reason alone.

"It’s not just about gender and having that represented, it’s about social care and doing it for the right reason," she tells Bustle. For Finkenauer, the reason comes down to her community and the people there she cares about.

"Whether your neighbor calls you and asks for a cup of sugar or come down and watch the kids for a couple minutes, you do it," she says. "You show up. That is so much a part of who we are and that is finally what we were able to see here in this election."

Once she's in Washington, Finkenauer will have one item in particular to remind her who she's showing up for. So much of her campaign's focus had to do with creating a better situation for workers in Iowa, and this talisman of hers is connected to one worker in particular. It's a sweatshirt, full of burn holes from welding, and it belonged to her father.

"That sweatshirt is absolutely going with me to Washington, in my office to remind not just myself but everybody around me that comes into that office why I’m there and who I’m fighting for," she says.

CORRECTION: This piece has been updated to reflect Rep. Blum's name.