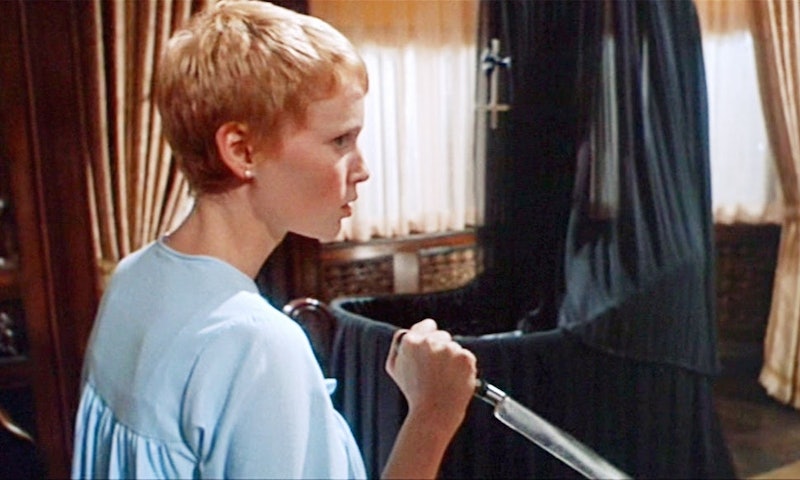 “Feminist horror is both a genre of and a lens through which to view horror films that allows women (and men!) to respond to and resist the way that society teaches people to perform gender,” writes Jessica Washak, author of the article "Five Generations of Horror Through A Feminist Lens", in an email interview with Bustle.

Levin uses feminist horror as a vehicle to satirize gendered roles in terrifying ways. He plays with male fear of the women’s liberation movement in 1972's The Stepford Wives, the urge to control the womb in 1967's Rosemary’s Baby, and the use of technology to overpower others in 1991's Sliver.

Of course, his books are just one part of the feminist thriller canon, which includes countless female authors: Shirley Jackson, Mary Shelley, Daphne Du Maurier, Patricia Highsmith, Octavia Butler, and Charlotte Perkins Gilman, and other important and brilliant authors who were not as widely known or celebrated during their lifetimes.

Ira Levin excelled at creating nuanced, funny and strong females. Take The Stepford Wives, a novel about men lobotomizing women into submission, that plays with the idea of male control. Joanna Eberhart, a proud member of the National Organization of Women, moves to town with her husband and kids and instantly becomes suspicious of "all the Stepford wives: actresses in commercials, pleased with detergent and floor wax, with cleansers. Shampoos, deodorants."

One interpretation of this story mocks these suburban women as perfection seekers. This reading, in my opinion, is backwards: The story is not satirizing women’s fears of becoming robotic housewives, but instead that men would force them to be nothing but that, should they have the option. The husbands of Stepford are so threatened by the idea of women with rights and autonomy that they figured out a way to trade in their wives for "audioanimatronic" versions. Eventually, our heroine must fight to the death for their right to be messy, disorganized, intelligent, and human.

In his novel Sliver, control is achieved through voyeuristic means. A rich man, Pete Henderson, outfits cameras into every room of his New York skyscraper, so he can watch the intimacies of the building. When a successful editor, Kay Norris, moves in, he uses the information he gleans from the hidden cameras to woo her. When she discovers that he's been murdering some of her neighbors, he holds her hostage.

The novel takes a turn in the second half of the book, when Pete shows Kay what he's been up to in his secret control room. Levin essentially predicts the success of reality television: Norris is sickened by the footage but can't look away from the screens, which show the fights, escapades, and day-to-day minutia of the people in her building. Henderson says, "It's like the difference between seeing cars piling up in a movie and a real accident in the street."

When Norris makes an inquiry to the legal department about the peeping, the response is shocking:"There's no federal or state criminal law yet against visual electronic surveillance, per se. The landlord could be subject to a civil suit if the tenant found out, but the only criminal charge he might face, other than the unauthorized phone tapping — which is a five year felony, by the way — would be running afoul of the state law against peeping, a very minor charge." Although Henderson is spying on everyone, it is the women whom he fetishizes. He kills one girlfriend and he attempts to murder Norris. The men may also have their privacy compromised, but it's only women who have their safety threatened.

The plot of Rosemary’s Baby is much more familiar to most people: Rosemary and her husband, Guy Woodhouse, move next door to a Satanic cult. An aspiring actor, Guy sells his wife (and her fertile womb) to the devil for a chance at Broadway stardom. In the article about the movie adaptation of the novel titled “The Devil Inside: Watching Rosemary’s Baby in the Age of #MeToo," Laura Jacobs writes: “It isn’t devil worship or the invocation of Satan that troubles the viewer. It’s that a man barters his wife’s body, and that her destiny has been ruthlessly appropriated and perverted." The question then is the question now: To whom does the womb belong — the woman, the Church, the husband, or the state?

“[These books] are highly relevant in 2018. Our current political landscape is riddled with representatives who believe that they have the right to govern the bodies of men and women across the country,” says Jessica Washak. “The years may change, but this problem does not.”

Levin's plots are imaginary, but his themes are rooted in a timeless reality. The confirmation of Brett Kavanaugh to the U.S. Supreme Court reinforced the message that sexual assault survivors are not more important than the men who assault them. Women continue to be gaslit — by their abusers, by their politicians, by men on the Supreme Court.

The highest court will now be more conservative than it has been in decades, and women are bracing themselves for a prolonged fight for control over their own bodies. This is a tumultuous moment where women are expressing rage, frustration, and fear in unprecedented ways — all themes that Ira Levin wrote into his horror novels. But this isn't a horror novel. This is real life.

More like this
Romance Authors Are Mobilizing For Reproductive Rights
By Natalia Perez-Gonzalez
Read The First Pages Of Emma Rosenblum’s Highly Anticipated Debut, 'Bad Summer People'
By Samantha Leach
What Joyce Carol Oates Knows About Fame
By Erin Somers
Ling Ma Is Back — This Time, With Yetis
By Kate Dwyer
Get Even More From Bustle — Sign Up For The Newsletter