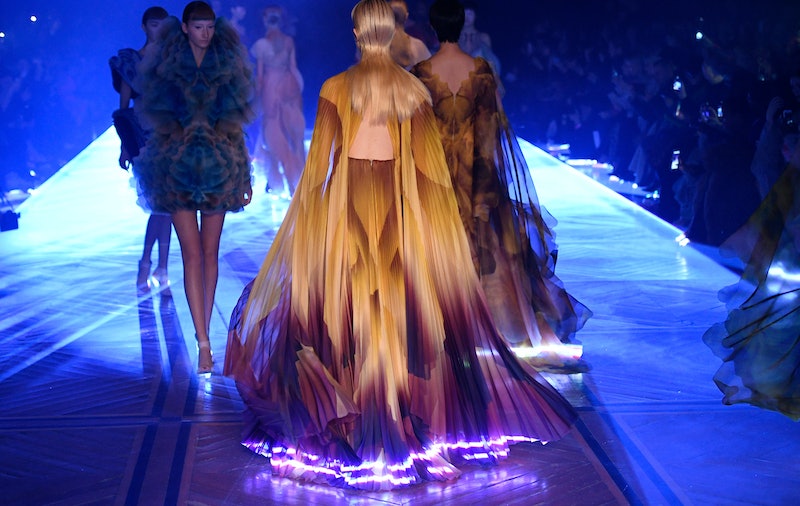 There was nothing quite like lighting up the playground with a new pair of light-up kicks. Your feet would be the talk of the yard as your Sonic sneakers pulsed as you ran across wood chips towards the slide, but just because you're an adult now doesn't mean that level of street cred has to stop. Iris van Herpen sent glow in the dark heels down the runway, giving you a grownup alternative to your blinking childhood sneakers. If you miss watching your feet strobe every time you take a step, then the runway has a few solutions for you in the form of couture.

Paris Couture Week is known for creating artsy masterpieces and sending unexpected looks down the runway, but not many could have anticipated that Dutch designer Iris van Herpen was going to quite literally light up the catwalk. But that is no surprise: The designer is known for her innovative collections, like her history making 2010 runway show which introduced the first ever collection that made use of 3D printing.

This particular 2019 collection, however, was inspired by galaxies and celestial gases, where the designer "cited inspirations that spanned the Harmonia Macrocosmica (a 17th-century star atlas) to the possibility of engineered human hybrids," according to Vogue.

Van Herpen even teamed up with New York–based artist and former NASA engineer Kim Keever, who helped her create the colors and images on her floating-gas-like dresses, giving them a definite celestial quality to them. And capping off most of those looks were heels that glowed just as bright as the constellations that inspired the collection.

But these aren't your run-of-the-mill light-up sneakers. Instead, the designer created plexiglass heels that glowed a bright white as models stomped down a darkened runway. The shoe itself was made out of a practical leather, but the stiletto was carved from transparent plexiglass and then infused with different colors to look like a bruising sky. When the lights turned off, the soles and heels glowed in the dark, not only bringing your childhood shoes back into sharp focus, but also emulating the glow in the dark star stickers that decorated every square inch of your bedroom. So many throwbacks in one show.

This isn't the first time that van Herpen was inspired by science or the natural world when it came to her fashion week shows. In her spring 2015 collection, “Magnetic Motion," she was inspired to create a whole line after touring the Large Hadron Collider, a particle accelerator that has a magnetic field about a hundred thousand times stronger than that of Earth's.

Then for last year's haute couture collection entitled “Ludi Nature,” she was inspired by everything from prehistoric crystals to data dust, creating nature-influenced pieces with a futuristic edge, walking the line between natural and unnatural. “Don’t forget how engineered nature is, itself,” Van Herpen told Vogue. “I think we as humans don’t even come close to the intelligence within nature. It’s funny how people think that nature is simple and technology is complex—it’s the opposite; technology is simple and nature is complex.”

From wood nymphs from the age 3019, to celestial clouds wearing glow in the dark heels, the innovative designer plays with trends in a boundary-breaking way. And with a little bit of luck, she will put light up shoes firmly back into our closets.