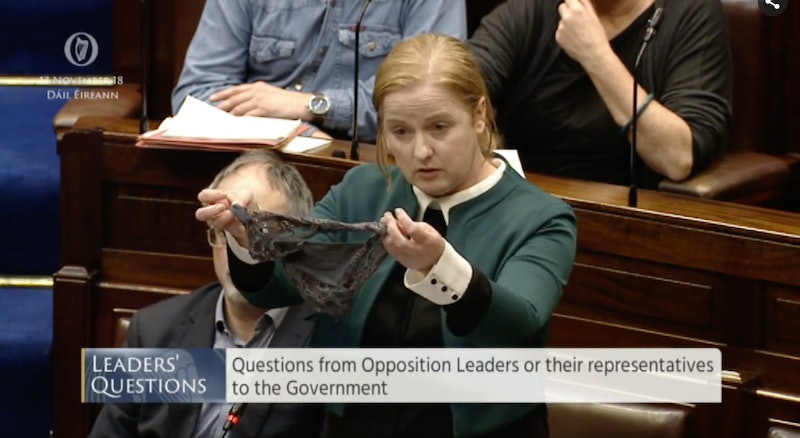 Victim-blaming is not an uncommon sight in rape trials, and following a particularly explicit incident in a trial in County Cork, Ireland, last week, a social media movement to protest the issue began across the country. Irish women's "This Is Not Consent" tweets were accompanied by demonstrations in Dublin on Wednesday, protesting the acquittal of a 27-year-old man in last week's rape trial.

During the trial, the man's defense lawyer, Elizabeth O'Connell, held up the accuser's underwear in court and said, "Does the evidence out-rule the possibility that she was attracted to the defendant and was open to meeting someone and being with someone? You have to look at the way she was dressed. She was wearing a thong with a lace front."

The implication that the 17-year-old plaintiff consented to sex with the defendant because she was wearing a lacy thong set off an immediate wave of criticism, including from Ruth Coppinger, a member of the Irish Parliament. At a meeting of Dáil (one of the houses of Parliament), Coppinger similarly raised up a thong, but used the opportunity to denounce victim-blaming and call for a better legal approach to sexual violence.

"It might seem embarrassing to show a pair of thongs here," she said. "How do you think a rape victim or a woman feels at the incongruous setting of her underwear being shown in a court?"

Susan Dillon, who started a Twitter account called "I Believe Her," is among the women who spearheaded the #ThisIsNotConsent movement after the trial. "We had hoped that as a society we had moved on from these archaic, victim-blaming rape myths," she told CNN. She said she began the page after another high-profile rape case in Ireland, where two former Ulster Rugby players were acquitted after being accused of raping a student at a house party in Belfast.

Following last week's verdict in Cork, the Dublin Rape Crisis Centre also joined in calls for reform, in order to avoid introducing rape myths around things like clothing and alcohol or drug use into trials. "These kind of mythologies and stereotypes around rape come up again and again in court cases, because the defense to rape is that the sex was consensual," Noeline Blackwell, chief executive of the organization, told The Irish Independent. "So anything the defendant can do to suggest there was consent will be used."

Since the hashtag was created, protests have been held across Ireland and countless women have joined in the online movement to express their anger and outrage over the grounds for the most recent rape acquittal. Some have posted art or cartoons, and others shared photographs of a variety of underwear to demonstrate that regardless of the style, underwear is never an explicit invitation.

During her speech in front of Dáil, Coppinger referenced Rape Crisis Network Ireland statistics that only 10 percent of rapes are reported and just one in 40 gets an adequate conviction. "We've seen recently clothes, fake tan, even contraception being used to discredit women," she continued. "How heroic do you have to be, Taosieach [prime minister] — how much levels of fortitude, to pursue a rape trial in this country?"