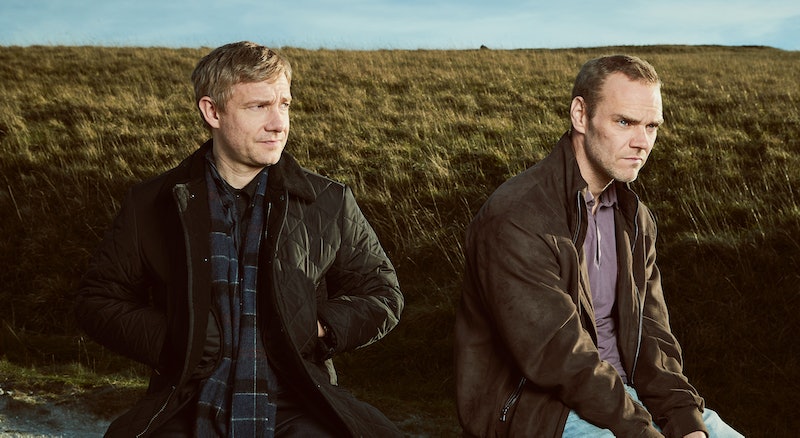 Autumn's here, and it's time to wrap yourself up in a cosy blanket on your sofa and settle in for some fantastic dramas. ITV's A Confession is definitely an excellent place to start — especially since Martin Freeman is at the helm. Freeman plays a detective investigating the murder of a young British woman in Swindon, and his drive to bring her killer to justice. But is A Confession based on a true story?

Much like Netflix's Mindhunter, A Confession is adapted from a real investigation, as the Radio Times reports. In this case, Detective Superintendent Stephen Fulcher's book Catching A Serial Killer is the foundation for this ITV drama, with Freeman portraying Fulcher in the series. Over six episodes, show creator and writer Jeff Pope (Little Boy Blue, Stan & Ollie) will explore Fulcher's investigation into the disappearance and subsequent murder of 22-year-old Sian O'Callaghan.

A Confession will also look at police protocol and the strict guidelines they have to follow — something that Fulcher "tossed away" while getting a confession from suspect Christopher Halliwell, according to the Guardian.

As Radio Times reports, Fulcher decided to bring Halliwell "to a nearby Iron Age hill fort called Barbury Castle" to question him, believing that O'Callaghan was still alive. Instead of taking him back to "Gablecross police station in Swindon where he would have had access to a solicitor," Fulcher questioned him alone.

It was during this interrogation that Halliwell confessed to the murder of O'Callaghan and another young woman, Becky Godden-Edwards, who had gone missing in 2002 or 2003, Cosmopolitan reports. After confessing to both crimes, he took the police to where the girls were buried. But as Radio Times notes, "to get those confessions, Fulcher was accused of breaching the guidelines of the Police and Criminal Evidence Act (PACE) by failing to caution Halliwell and denying him access to a solicitor at the time the confessions were obtained."

This led to Halliwell being only convicted of O'Callaghan's murder, as that "case was strong enough without that confession," the Radio Times reports. As for Godden-Edwards, Halliwell's confession of her death was excluded due to Fulcher's misconduct. However, in 2016 Godden-Edwards' family finally got justice after judge Sir John Griffiths "decided that the evidence collected by Fulcher [...] could and should be heard in court," which led to a sentence of life imprisonment for Halliwell.

"It's a simple moral issue. I did these things because they were the right things to do in these circumstances. In fact, they were the only things to do," Fulcher told the Guardian in 2017. "But for my intervention, Christopher Halliwell would be walking the streets now. And whatever the public thinks about it — and I'm as liberal as the next person — there's a very good chance he'd have killed other women in the meantime." He added:

"So he definitely killed Sian in March 2011, he definitely killed Becky early 2003. You're seriously telling me there's nothing in between or either side? It doesn't sound true. Why would this not be the biggest, most protracted, most vigorous investigation in the history of British policing? It isn't and it hasn't been. Can you have a police force that simply ignores a serial killer?"