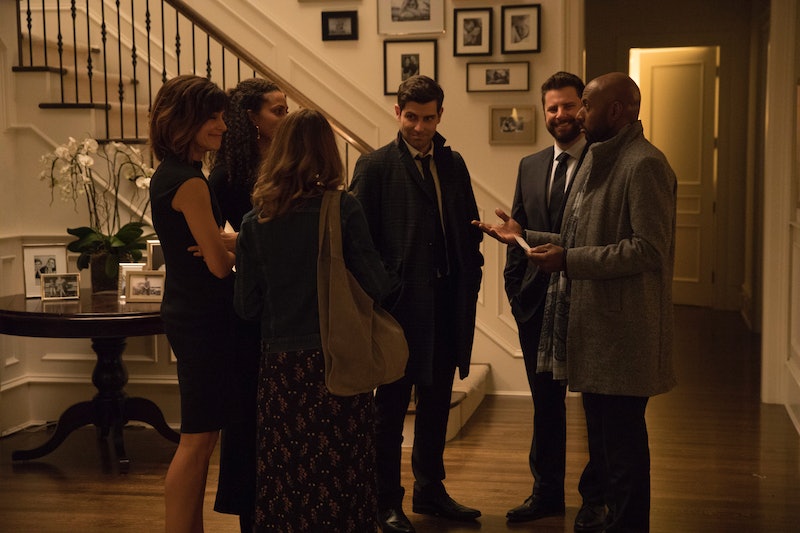 Ever watched This Is Us and thought, 'Wow, I wish there was another show that could make me cry this much and feel all the feels?' Well, you're in luck. Enter A Million Little Things, ABC's latest drama centered on a group of friends in Boston, brought together when their friend dies of suicide. It premieres on the network on Wednesday, Sept 26 at 10 p.m. ET but ads for the heart-wrenching new series feel sort of familiar. Is that because A Million Little Things is based on a true story, or is it something else?

Though most of the details of this new show are fictional, the initial inspiration for A Million Little Things was a very real and painful tragedy. "One day I was walking and I ran into a buddy of mine, and we both lit up. It was like 'dude!' 'Dude!'" the show's creator DJ Nash explained in a teaser video. The two friends made plans to meet up the next week, but soon after their chance run-in, Nash learned that his friend had committed suicide. "I truly love this idea that everything happens for a reason," Nash says in the trailer. In his new show, a group of friends are brought even closer together as they try to uncover why their friend Jon decided to kill himself and how their relationships affect their lives. Maybe the "reason" this tragedy occurred, at least in the eyes of the series creator, was to bind these friends together for life. It's an admittedly problematic premise, though.

Although the show is based in Nash's very real personal tragedy, early reviews of A Million Little Things have criticized the drama for glamorizing suicide. Rome (Romany Malco) , one of the central characters, is also depressed and suicidal, and a New York Times review laments that "the show approaches Rome’s depression and despair as quirky traits rather than devastating, life-threatening conditions that require immediate and persistent attention," and that "the show also packages suicide as some beautiful mystery to be examined, one last puzzle to bring us all together." Claire Fallon from HuffPost agreed. "I didn’t want to lend the approval of my tears to a show about how a man’s suicide could actually be a great wake-up call for his friends," she writes in a review of A Million Little Things.

Nash and the rest of the show's cast and production team assert that any romanticization of suicide was completely unintentional. “I think there’s absolutely nothing romantic about suicide — it’s a real conscious thing in our [writers’] room,” Nash said at the 2018 Television Critics Association Summer Press Tour, per the Los Angeles Times. "We’re not romanticizing the story; we’re telling it in an authentic way. If you watch the show, you’ll see that these people’s lives are changed because of this. I don’t think [people] will watch the show and say, ‘Oh, I should do that too.’ If anything, it’s a cautionary tale of what can happen. It is something we take unbelievably seriously.”

Nash also announced that the show will be creating a public service announcement to run after the pilot episode. According to the LA Times, "The PSA will feature three of the show’s cast members, as well Linkin Park’s Mike Shinoda and Chester Bennington’s widow, Talinda Ann Bentley." Hopefully, this measure will help to counteract some of the potential dangers of centering a show around the very real and tragic outcomes of serious mental health issues, as demonstrated by other shows like, 13 Reasons Why, which some felt glamorized suicide, too.

Maybe A Million Reasons Why will help break this problematic cycle and present some . But if the early reviews are correct, it might have fallen prey to the same pervasive suicide tropes that befell many shows before them.

More like this
Is The Serpent Queen Based On A True Story?
By Maxine Harrison
Where Is The Bling Ring’s Rachel Lee Now?
By Arya Roshanian
What Is 'Pretty Wild' Star Tess Taylor Up To Now?
By Morgan Leigh Davies
Where Is Armie Hammer’s Ex-Wife Elizabeth Chambers Now After 'House Of Hammer'?
By Grace Wehniainen and Radhika Menon
Get Even More From Bustle — Sign Up For The Newsletter