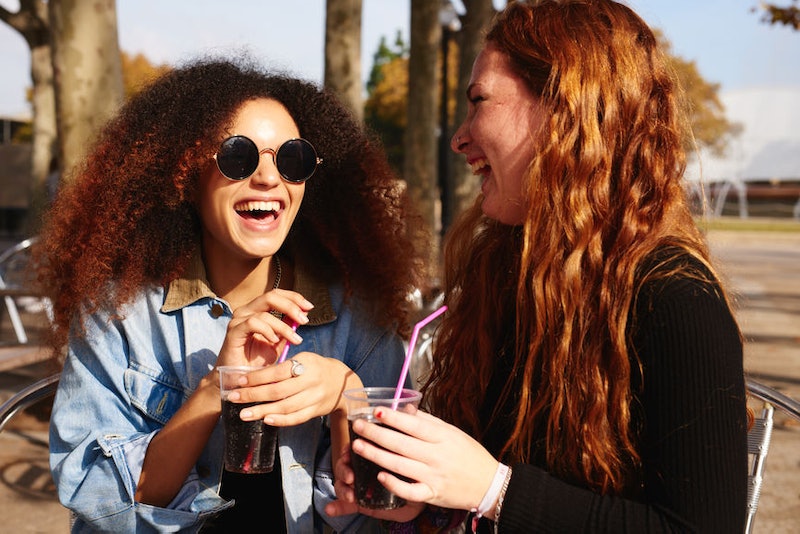 Anyone who's ever experienced the delight of a large Coke and a bucket of sweet popcorn in the cinema has probably also encountered the foggy, drowsy, post-sugar slump (entirely worth it, I'd maintain). Here's something that might surprise you, however: while that sugar crash is well documented by scientists, the sugar high that's assumed to precede it might not actually occur at all. So is a sugar rush a thing? According to the authors of a new study, published in the journal Neuroscience & Biobehavioral Reviews, probably not.

Researchers from three universities — the University of Warwick, Humboldt University of Berlin, and Lancaster University — examined the impact of sugar consumption on mood by analysing 31 existing studies, comprising data from almost 1300 participants. They looked for a range of mood outcomes after consuming sugar, including alertness, anger, depression, vigor, anxiety, contentedness, confusion, and fatigue.

The scientists also assessed whether the type or amount of sugar consumed, as well as any physical or mental activities performed, influenced the participants' mood.

And the findings? No matter how much sugar the study subjects consumed, what type they consumed, or whether they carried out "demanding" activities afterwards, eating or drinking sugar had no positive impact on "any aspect of mood." The idea of a sugar rush, basically, is just that — an idea. As an adult, no amount of Monday afternoon Tangfastics at your desk, delicious as they may be, will deliver you that elusive boost of energy.

Dr. Sandra Sünram-Lea of the University of Warwick, one of the authors of the study, said in a press release, "Our findings indicate that sugary drinks or snacks do not provide a quick 'fuel refill' to make us feel more alert."

What's more, the study found that the post-sugar crash is all too real: more specifically, you're likely to experience a drop in alertness within an hour of consuming sugar, and an increase in fatigue within half an hour.

Lead author Dr. Konstantinos Mantantzis, from the Humboldt University of Berlin, said, "The idea that sugar can improve mood has been widely influential in popular culture, so much so that people all over the world consume sugary drinks to become more alert or combat fatigue."

"Our findings very clearly indicate that such claims are not substantiated — if anything, sugar will probably make you feel worse," Dr. Mantantzis said.

Professor Elizabeth Maylor, from the University of Warwick, said in a press release, "We hope that our findings will go a long way to dispel the myth of the 'sugar rush' and inform public health policies to decrease sugar consumption."

Here's the deal: if you've browsed even a single wellness Instagrammer's feed, or consumed any news media within the past five years, you're probably already aware of the health impacts of sugar, and certainly don't need (or deserve) to be scolded or concern-trolled about eating it. Savouring an overstuffed donut or a rapidly melting ice cream is a joy that shouldn't be burdened with shame — just don't expect it to provide an energy rush.