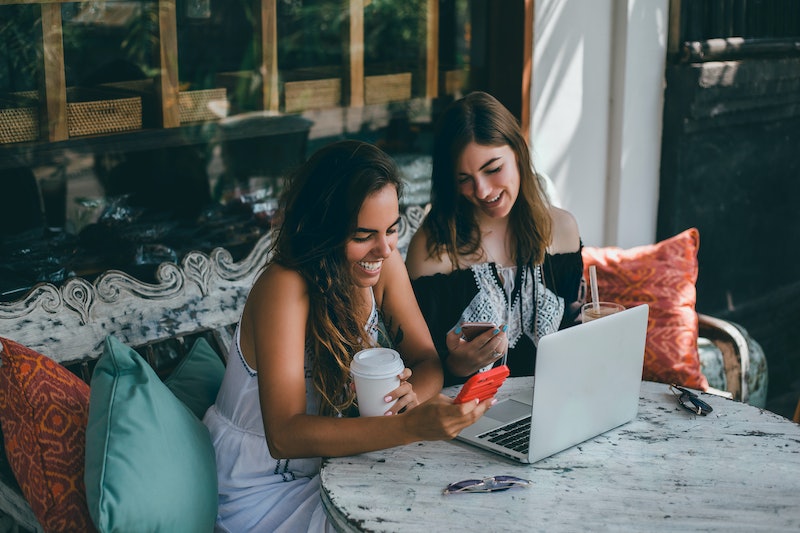 As Mashable reported on Thursday, an Apple feature that lets you quickly share photos and other files with nearby friends might expose some other info as well. Namely, that could include portions of your cell phone number that some hackers, in turn, may be able to convert to your full number. If you're concerned about whether AirDrop is safe to use following these findings, though, don't write off the sharing feature just yet.

Bustle reached out to Apple for comment about AirDrop. Researchers at the security firm Hexway first identified this AirDrop vulnerability in a study that the organization published on July 25. As Mashable reported, the researchers discovered that when AirDrop is being used on your device, it transmits a partial hash (a few digits) of your phone number. Mashable noted that this transmission is necessary because it helps devices establish contact with each other when exchanging files via AirDrop, which works through a Bluetooth connection.

However, because this information has to be transmitted in order for AirDrop to work, it also means that someone who has the technological skills to do so can access this partial hash of your phone number — and eventually recover your full number based on this information, the study noted. Moreover, the study added that, if you're using the Wi-Fi password sharing feature on your device, it will also transmit partial hashes of your Apple ID and email address. However, the researchers didn't indicate whether your full Apple ID and email could be recovered from this information.

As iDropNews reported, while this study establishes a security vulnerability with AirDrop, it doesn't necessarily mean you have to stop using it. The outlet noted that, while a hacker can access a list of phone numbers in their vicinity using AirDrop, it's unlikely that they will be able to find out which number belongs to a specific person. This is the case because the type of Bluetooth used for AirDrop has a substantial range and many phone numbers would fall within this range at any given time, iDropNews added.

As a result, according to the outlet, it would likely be difficult for a hacker to specifically target you and your device in a cyber attack based on this information. That being said, it's not entirely impossible for someone to do so if they're determined and follow you around to various locations to try to find out your phone number through the process of elimination, iDropNews noted. However, this represents a pretty extreme circumstance.

Mashable similarly reported that it's pretty unlikely that someone would go through all of these measures to get your phone number. And Tom's Guide, a website specializing in technology recommendations and reviews, indicated that you would have to be a security or technology expert in order to exploit this AirDrop vulnerability, which means that the average person probably couldn't do so.

So, if you're still comfortable with AirDrop in light of this information, you can decide to keep using the feature. Or, if this new research concerns you, you can either turn off Bluetooth completely when you're in a public place or just switch off the AirDrop feature via settings on your device, Gizmodo suggested. The outlet added that you can also avoid using the Wi-Fi sharing feature in public settings to further address any worries you may have about your personal data being accessed by others.