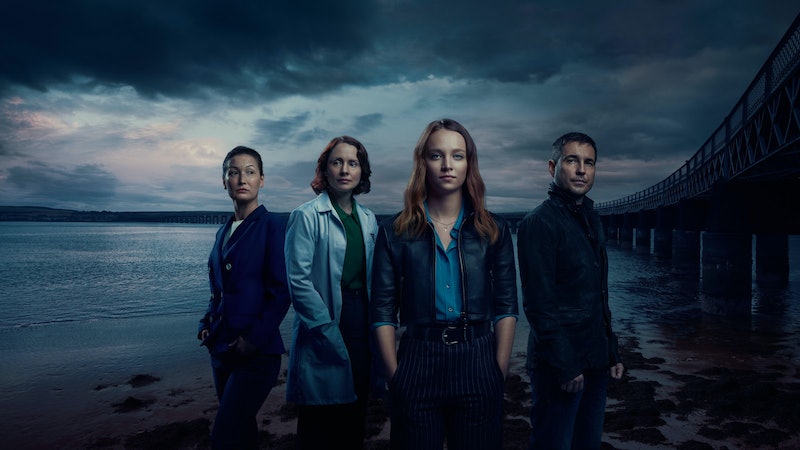 ITV and BBC have some cracking shows scheduled for the festive period, and now UKTV's crime channel Alibi has joined in with their first original drama Traces. Set in the Scottish city of Dundee, the series follows three forensic investigators working on an unsolved murder case, which brings a whole host of dark secrets to the surface. But is Traces based on a true story?

As the story revolves around forensic science, there's a guaranteed level of realism involved to portray the scientific field accurately. But the narrative itself — including the unsolved murder — appears to be fictional. Written by Amelia Bullmore (Scott and Bailey) and based on an original idea by crime writer Val McDermid, this thriller is "told from a fresh point of view, where forensic science takes centre stage," as Red Production Company writes in a press statement.

Set in Scotland, the series follows Emma Hedges (played by Molly Windsor) at the beginning of her new job as a lab technician at the Scottish Institute of Forensic Science (SIFA). While learning the ropes, she comes across a fictional case that "has a strikingly similar and shocking link to her past," as Deadline writes. With the help of professors Sarah Gordon (Laura Fraser) and Kathy Torrance (Jennifer Spence), the three scientists uncover a web of dark secrets that lead to an unsolved murder case.

"When the idea came over from RED it genuinely made the hairs on the back of my neck stand up," UKTV drama commissioner Philippa Collie Cousins said in the statement. "The fantastic writing talent in Amelia Bullmore coupled with Nicola Schindler and the team at RED will make Alibi's first ever drama commission something really quite special." She continued:

"With strong female characters this is Happy Valley meets Silent Witness, a dark and exciting show that I can't wait for us to get cracking on."

The six-part drama also features a very familiar face for Line of Duty fans, as Martin Compston is starring as Emma's love interest, Daniel. "It was the sort of part I hadn't played for a while," he told The Guardian recently. "Daniel's a nice guy trying to do the right thing and then he's got this wee firecracker in his life, they sort of consume each other. His head is a bit of a mess when we meet him and things just get more wild."

More like this
'Consent' Is Not Just One Person’s Story, But Hundreds
By Shahed Ezaydi
Olivia Colman Stars In First-Look Trailer For BBC's 'Great Expectations'
By Sabah Hussain and Sam Ramsden
Everything To Know About The 'Daisy Jones & The Six' TV Series
By Maxine Harrison and Brad Witter
Wait, Is 'Happy Valley' Not Actually Over?
By Darshita Goyal
Get The Very Best Of Bustle/UK
Sign up for Bustle UK's twice-weekly newsletter, featuring the latest must-watch TV, moving personal stories, and expert advice on the hottest viral buys.